Behind the Styling of Troye Sivan's 'Lucky Strike' Beach Babes

There are a handful of designers and stylists in the world that can create pieces that are, all at once, norm-defying, norm-subverting, and norm-friendly, and the Amsterdam-based Sophie Hardeman happens to be one of these designers. In what is still known as one of the more meteoric rises in contemporary fashion history, Hardeman had the likes of Rihanna and Kehlani pulling pieces from her collections shortly after graduating from art school.

Hardeman is once again making headlines after styling Troye Sivan's newest music video, "Lucky Strike." Fans obsessed over the video almost instantly, but many were also buzzing about Hardeman's styling choices for Sivan.

The video, however, would only give viewers a sneak peek into Sophie Hardeman's refreshing approach to design. Hardeman's risk-seeking philosophy towards construction is what gives her label its genuinely punk aesthetic — daytime wear for the label is defined by denim bralettes, thongs, assless chaps and biker suits. What would normally be considered a character piece exists as an everyday basic in the world of Hardeman.

On the same runway, however, Hardeman will also send out models in classic denim jackets and flared pants. This concept of norm confusing, when combined with the fact that Hardeman resists gendering processes in her works and castings, creates a utopia-grazing that fashion is only beginning to encounter in 2019.

PAPER caught up with Hardeman about working on the "Lucky Strike" video, her philosophy, and her excitement for the future of her brand. Read the full interview, below, and check out exclusive behind-the-scenes shots from set. 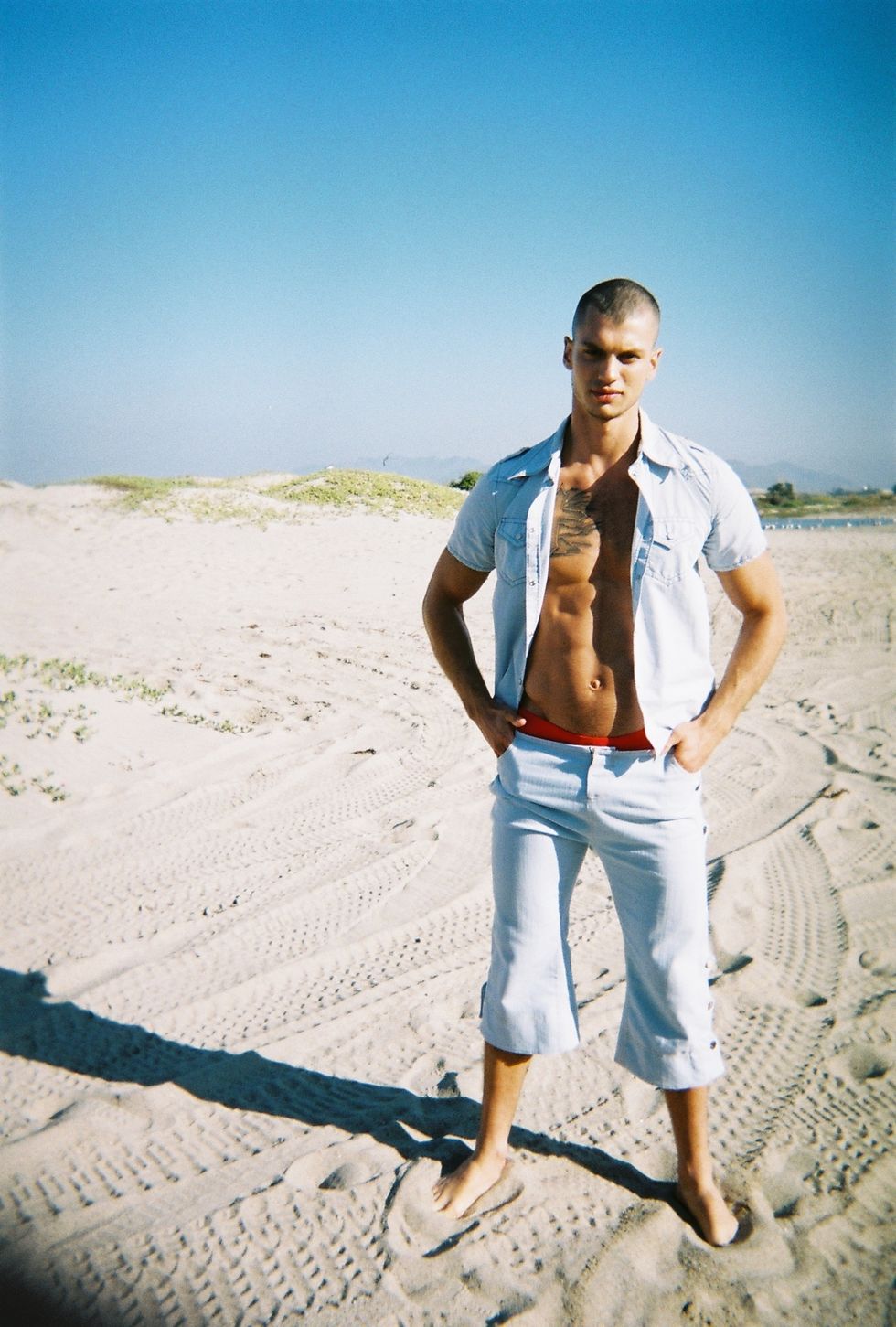 How did styling the "Lucky Strike" video come about? You've worked with the director, Emma Westenberg, before, correct?

Yes! We didn't really know each other in art school but liked each other's work, and Emma asked me if she could make a film with my graduation collection, which was the first one, "Blue and You." After that film, we became really good friends and we really understood each other's language. We want to say the same thing, but have a different medium. It's a really amazing collaboration, we don't talk much because we already know when we're onto something. After that we did a couple projects together. Then, Emma was asked to make the music video for Troye and she pitched me as a stylist, I think because it would fit really well with what the clip was about, but also then what Hardeman stands for. We talked about casting, we talked about the cinematography. We were discussing things like not only what clothes are they wearing, but really who's wearing it, what is it supposed to express. Then we were discovering that we need certain kinds of people in the casting, which is definitely a conversation with Troye because he knows what he wants.

How did you come about deciding what to put Troye and co-star Brandon Good in for the video?

I didn't do the end casting, but I know they were looking for a certain type for Brandon, and I was very excited to see who it would be because depending on that, the outfit would completely change. I also think this is part of the reason I was asked to do the styling, because we had just made a spring break-themed collection — not a theme, a little bit of inspiration. It's colorful and very beachy. I learned more and more about spring break, and then I learned that it was really disgusting and terrible and that people get very drunk and they actually misbehave and treat each other really bad. It's not a really fun place, it sounds fucking scary. So at that time the summer collection was about a first trip on your own where you are becoming independent, and I think that is what Hardeman is always researching: what does it mean to be yourself? What does it mean within the group or within the community? The core is true self-expression. So a lot of the clothing did have a lot of colors. It's colorful and beachy, but also our line is, every time, a continuation of the same story and pictures. It's not entirely a whole world different from the previous collection, but I think we were able to use a lot of the pieces because of the beach theme.

Besides styling the "Lucky Strike" video, have you had any other highlights for Hardeman when it comes to celebrity styling?

I think definitely the first time that Rihanna wore something. Hardeman was not even one month old, but that was because I got nominated to participate in VFILES in 2016. That was definitely the first highlight. There's been celebrities that have worn the stuff, but I think most exciting is when you're working on a commission project and you make something specially for them, and I'm doing this for the first time now. There's some stuff coming up that I can't really talk about yet. I think I'm really inspired this year. It's incredible when somebody ridiculously famous, like Rihanna, wears something. You just don't understand what's happening because you see her every day, all the time, and you feel like you know her but you really don't. My goal this year is to dress more people that I find really inspiring, that doesn't necessarily mean they're really famous.

Scaling back from that point, the brand really is a conformist's nightmare and a rebel's dream. Do you actively consider that separation when creating?

All the time. I want people to feel attractive, and I want them to feel attracted to the clothes, but then when they look at it a little bit longer, they're a little bit disturbed. For me it's really a thin line to walk in the balance of because some things go really far, like they're over-the-top clear expressing, "Fuck everything. Fuck the system," but some things are really just a gentle detail or a choice of fabric. They have a lighter reference. Not everything is very bold. Some things are really normal, and I think that's really important because that together makes a reflection of the reality. [Laughs].

It's very much a surrealist approach. You were talking about normality — denim, culturally, in the United States, is a very normal, gendered article of clothing. Bringing it to life in the way that Hardeman does is a total warp of reality. How do you go about making denim special for all people when it's so historically gendered?

I think there's a lot of things in denim which are interesting that you can play with. For instance, because of all the topstitching, it has a lot of lines, so it's really graphic. If you distort the lines, then immediately it becomes affected in a way. I think I also make a lot of things in denim which aren't usually made in denim, but they can be — which makes them really easy to wear. Like prom dress jeans! In a way that's also really Dutch because Dutch people don't really dress up as much. The whole time they wear the same thing, also when they go out.

Amsterdam is a really multicultural city, and I think that's what I really like because it's not only one conversation — it's a lot of different ones. I think that it's good living here, but almost too good. I'm ready to go on a residency some place, because I think I'm always making things based on how I experience the world around me, so I feel like there's a lot of territories still to discover.

So are you thinking seclusion or a totally different culture?

I think a different culture like Italy or Japan.

What aesthetics or shapes have you yet to explore that you're excited about exploring in the future, especially with these different experiences in mind?

I'm excited to broaden my product line to homeware. I would love to make bed linen, kitchen towels, wallpaper, cutlery maybe? I would like to be at Home Depot/Macy's, offering all the basic things you need in your house and living.

When you encounter those everyday items, are you thinking, "How can I change this, how can I make it unlike what people are used to?"

Not necessarily, but it's fun to think about. One year ago I was pulled into a project to help design a pair of socks. It was a very long process with in-depth conversations, and it was so exciting to me because: how much could you take apart a pair of socks and they're still socks? I don't think it only needs to be clothing, I think it's about creating interactions with people, so I like to make things that people can wear, use, or even eat.

Hardeman will be in Paris from January 18-22 debuting their fall 2019 collection. Direct appointments can be made at info@hardeman.co.