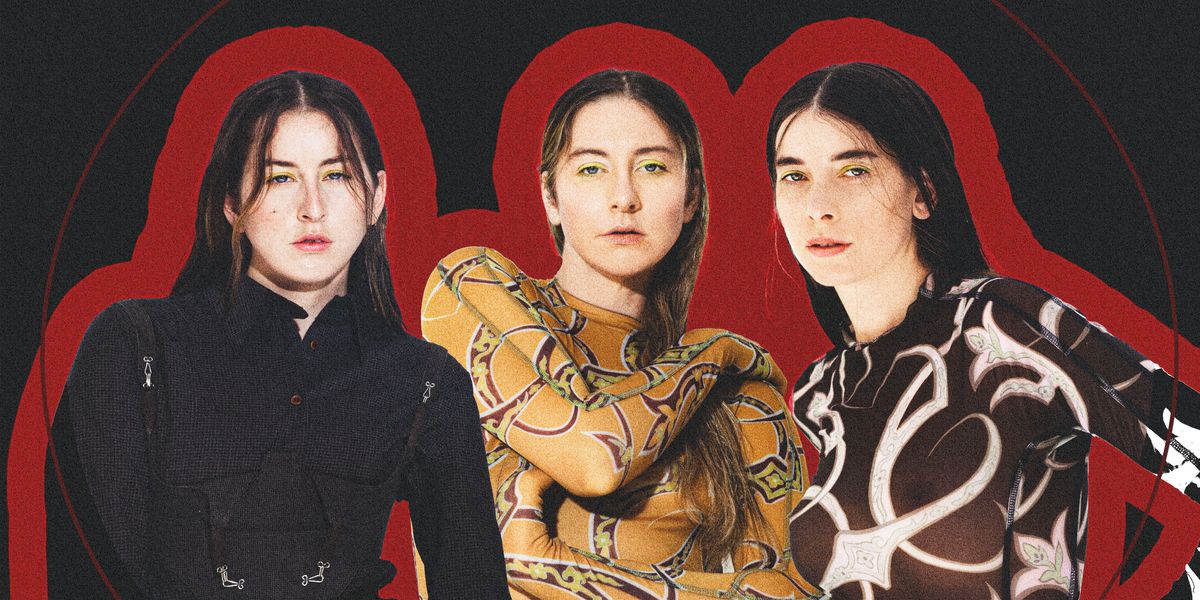 As the music industry circles in the same holding pattern it's been stuck in since early March, we may as well just keep listening to HAIM's perfect third album. Even before lockdown, Women in Music Pt. III had been building up slowly, beginning with the release of instant playlist addition "Summer Girl" back in July 2019. A year later, as the first wave of COVID-19 cases hit and a US tour became impossible, sisters Este, Danielle and Alana decided to drop the record anyway. And thank God. It's already a cliché to talk about music as having accidentally anticipated the pandemic's repetitive and restless mood, but WIMPIII's 16 tracks really do stretch out to fill whatever space you put them in. There's a curiously upbeat sense of malaise. Dreams are a recurring theme, and yet so are hot sleepless nights.

"The songs are very roomy and raw," agrees lead vocalist Danielle during a late-August Zoom session where she and her sisters appear as quippy individual squares. "Breathy vocals," adds Este, the group's bassist. "Airy drums." It's 5 PM in the band's native Los Angeles, which is actually HAIM's family Facetime window. "You're basically seeing what we do every day," Alana — guitarist, keyboardist and the most talkative of the trio — explains while gesturing to the well-stocked bar behind her laptop. "We just have it on. Sometimes Mom and Dad will join." Este is immunocompromised, and all three have adapted to a pandemic "hermit" lifestyle that for Danielle in particular was already a strong preference. "We don't have friends," says Alana. "We only know each other." Regrettably, parents Moti and Donna do not make an appearance on the call.

Producer Rostam's occasional sax flourishes aside, HAIM wanted WIMPIII's lyrics to take precedence over instrumentation. Vocals float gently above acoustic strums or cut through power riffs, the observations sharp and candid. "I've Been Down" coolly describes a depressive episode while guitars noodle innocently in the background. There's the welcome, if unexpected, voicemail sleaze of "3AM." "I Know Alone" softly screams into the void: "Nights turn into days/ That turn to grey /Keep turning over." As might be expected from such fierce Angelinos, all of it makes for wonderful driving music, quite literally in the case of sultry highway sex jam "Gasoline." (Although when the subject comes up, Danielle is quick to come to the defense of LA's underrated, poorly-publicized subway system. "I could take the subway to Long Beach right now if I wanted!" Este insists.)

"We named our record Women in Music because it made us fucking laugh. Like it's just hilarious that that's even a thing."

Sometimes the human moments are too relatable — multiple exes have asked Este if their actions are being described in the bouncing, ska-lite "Another Try," which actually chronicles an on-off romance of Alana's. "They're very sweet boys, but no, they're wrong," says Este of her former paramours. She's the only HAIM sister who stays in touch with old lovers, and they reliably reach out every album cycle, assuming various songs are about them, "You're So Vain"-style.

"It is a problem," she confirms. "And 99% of the time I'm like, absolutely not. I did not write the song about us. You're married now. I'm not giving you another try. This wasn't my subliminal messaging to you. This wasn't my mating call."

Elsewhere, the messaging is more pointed. Reading misogynistic male music journalists and guitar store employees for filth, "Man from the Magazine" is the kind of song HAIM's male friends will desperately hope was written about someone else. There's anger in the first verse, but it gives way to the band's inescapable sense of humor by the second. "I mean, we named our record Women in Music because it made us fucking laugh," says Alana. "Like it's just hilarious that that's even a thing. It's, you know, the eye roll. It's just a very big eye roll."

"Hallelujah," meanwhile, is a sincere giving of thanks for family and friendship — the relationships that matter. Again, this is the kind of shit that happens to resonate right now, although sadly not all of us can rely on our cool sisters-slash-bandmates for emotional support as quarantine heads into winter. The track was a long time coming, although they were all too self-conscious to write down their feelings about "how much they loved each other" for a while.

"To quote High School Musical, we're all in this together."

"Every time we tried, we were like, 'Gross,'" says Alana. "Like, why are we being so nice to each other? We are siblings, after all." But when they finally sat down, it ended up being one of the quickest songs on the record. "We had a lot to say; it just came out and it was done."

Ever since they started writing songs together as a trio of long-haired, Canter's Deli-regulars from the San Fernando Valley, HAIM's family ties have comforted their fans. That's never more so than in 2020, when a wholesome social media follow can be a lifeline. If one sister is missing from a single photo or dance video posted to HAIM's Instagram, panicked conspiracy theories brew in the comments section. Is Alana going solo, or quitting music to become Paul Thomas Anderson's full-time muse? Never. There's a simple reason that she's occasionally missing from the shot: "Someone has to film, and unfortunately Danielle and Este are way better dancers than I am."

Even at the end of a historically bad summer, it's a lot of fun to hang with HAIM. They are, against tall odds, finding silver linings during This Time. "We're a hoot, we like to laugh," says Alana. "We are a hoot," agrees Este. "That is true." We pause the interview and deliberate what our signature dance moves will be when party culture finally returns. It is a thrill to briefly audition as the fourth HAIM, with Este's arms and shoulders delivering a bendy tutorial for "the liquid," which has been her go-to since middle school. "You can never go wrong with a step touch, either," says Alana. "A lot of the stuff that I think we do is, uh, pointing," Este admits.

We speculate about a post-vaccine warehouse rave renaissance, complete with pacifiers and JNCO jeans. "We're going to recreate Trainspotting every weekend," Este decides.

"I will call every HAIM fan and remind them to register to vote."

What the three of them actually miss most is performing: they're a touring band, first and foremost, and you can bet that when live music comes back (European dates, at least, are planned for next year), there'll be a show. Alana's been watching Prince's Sign o' the Times concert film for inspiration; when HAIM filmed a memorable cameo in The Lonely Island's The Unauthorized Bash Brothers Experience two years ago, they took notes from the endless energy of Maya Rudolph, who when schedule permits heads up the Prince cover band Princess. Stans of Hollywood's greatest power couple will note the Paul Thomas Anderson connection there: Rudolph's husband is often framed as an unlikely HAIM collaborator, having helmed five of their music videos and shot WIMPIII's cover art. It's an appropriately cinematic snap of them at the Canter's counter, glazed in '70s sepia.

There are good times to come. As well as a more longform collab between Alana and Anderson. In the meantime, though, it's all about staying at home on Facetime. Sinking into the sparseness of lockdown life; staring at a sunset or two. "We want to be part of the solution and not the problem, at the end of the day," says Este. "To quote High School Musical, we're all in this together." Oh, and voting. "That's what's up," says Alana. "I will call every HAIM fan and remind them to register to vote," adds Este. "We should do that. Wait, if anyone reading this wants us to be a part of a telethon to get people to vote...?"

Everything's going to be alright. Put some music on. Make sure you're registered. Call your sisters. Definitely rewatch Boogie Nights. "I don't really understand how it's all going to work," says Danielle, "but I'm hopeful."