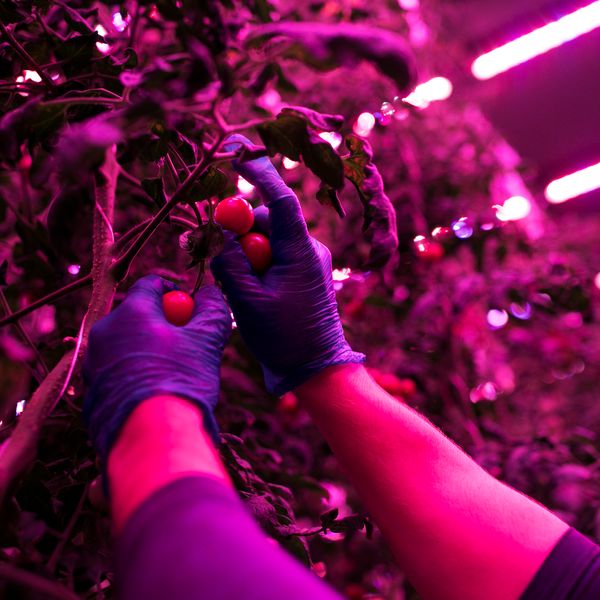 While New York grieves the inability to visit its numerous cultural institutions, at least the world can still get a dose of the fine arts through one of the many museum collections now available online. And if you're masked and strolling by the Guggenheim in-person, you can now feast your eyes on some very special tomatoes, according to a New York Times report.

Related | Uglyworldwide Is a Globetrotting Muse in This Trippy CGI Campaign

While the museum's spiraled interiors are closed off to the public, a futuristic-looking tomato garden can be seen through a window from a safe distance. You might also spot David Litvin tending to the crops under pink fluorescent lighting, one of the only people allowed in the shuttered museum other than security guards. His only colleagues inside the garden are bees; two hives are present to ensure the tomatoes are pollinated.

The plants are a part of Countryside, The Future, the Guggenheim's newest exhibition, which has now been placed on hold. Litvin moved to New York from Tel Aviv with his wife and dog, originally with the plan of staying for six months to care for the plants, while also getting to know the city. Unfortunately, he hasn't done much of the latter, sharing that he only managed to visit a comedy bar before the city shut down due to the pandemic. Still, Litvin has been keeping busy by walking through Central Park from the Upper West Side to take care of his tomatoes, making sure they look perfect.

Litvin must be doing a good job, because onlookers certainly think the tomatoes look good enough to eat, with several of them asking if they could buy some. Sadly, they're not available for purchase. But the good news is every week, 3,000 tomatoes are loaded in a City Harvest van, which drops off the produce at La Jordana food pantry in Flushing, Queens. Litvin's wife also gets a few as well — one of the perks of being married to thee tomato man.