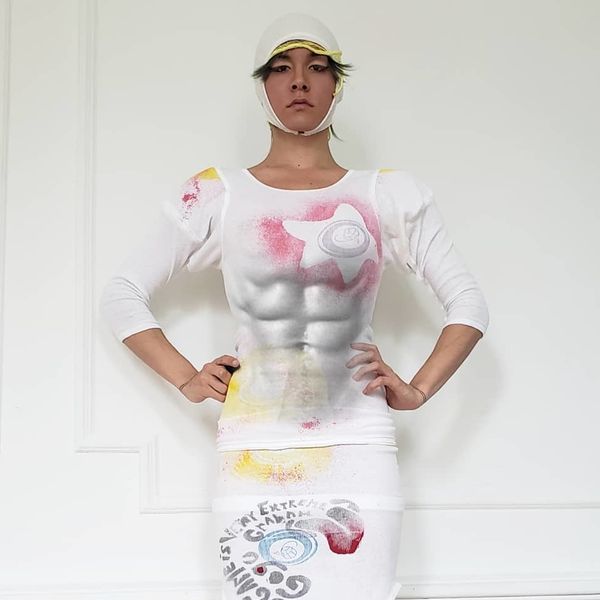 You Should Support Independent Designers This NYFW

With so many major designers leaving New York Fashion Week to show in different cities — Tom Ford, Tommy Hilfiger and, most recently, Jeremy Scott — the chance for young, local talent to rise up is more urgent than ever. On Twitter, New York Times' fashion critic Vanessa Friedman called this season a "designer ghost town," opening a flood of responses acknowledging the possibility for fresh blood: "Time to nurture and invest in new talent," someone wrote. "Elevate new up-and-coming designers," another agreed.

But producing and presenting a collection during NYFW is challenging, especially for independent designers working to launch their brand without any financial support. Clothes are expensive (the fabrics, trimmings and hours spent), and shows are even worse (the PR, venue and models), forcing designers to find smart, innovative ways to raise money.

Gogo Graham is among the lot of promising NYC talent, having established a name for herself as someone who prioritizes the transgender community through fashion and casting. Her womenswear is always constructed with existing garments, transforming them into completely different silhouettes. For Spring 2020, Graham's lookbook honored trans femme activists, and included her take on traditional officewear using repurposed business casual shirting — a statement on inclusivity in the workplace.

Last NYFW, Graham took over the New Museum with a collection of dramatic, femme gowns that closed with an emotional, bloody wedding gown. "I was thinking a lot about garments someone could wear to be married in or be buried in," she told PAPER, underscoring a "ceremonial" production that featured Performance Artist Leah James.

This season, she's planning to continue her mission, with financial help from the audience that's closely supported her thus far. In order to pay her models, Graham has released an exclusive t-shirt available on depop for $50. "I think it's important for anyone who's doing work to be compensated," she says. "Fashion designers don't have anything without the work that models do for them."

The t-shirt's print, which Graham designed herself, is symbolic of how long she's been working in the fashion industry. "The print indicates that this season will be my sixth fashion show and 10th collection for the brand, decorated with an image of a jewelry codpiece," she says. "They're made from t-shirts I've been given or found in old bins around town, and the money I make from them goes directly towards making this Fall 2020 show happen and paying the models for it. It has to be this way since I don't have funds to hire anyone at this point."

"Fashion designers don't have anything without the work that models do for them."

Still, Graham prides herself on this scrappy, independent spirit as a disruptive voice in a city largely dominated by corporate fashion. "I'm consistently simultaneously appalled and bored by the lifelessness and general lack of beauty that exists within major fashion brands," she says. "But they're doing what they're meant to do as businesses: generating vast sums of money for their owners. I think the garments in many larger brands consequently reflect this, whether intentionally or not, in their vapid extravagance and garish display of wealth that inevitably comes across as masturbatory and out of touch."

She relates to smaller New York brands who're "doing what they can to stay afloat," but says they're "sometimes aesthetically mimicking larger ones or, in some cases, each other in the process." By championing trans rights and visibility, while also pushing forward a larger statement on sustainable fashion, Graham inevitably — and respectably — exists on the fringes of her peers. "If I fit into the local industry, it's by playing the role of a delusional scavenger who likes to play dress up as a slutty courtroom judge banging gavels and waving fingers in period-inspired clothing," Graham says. "I'm just another independent designer of a small brand trying to make rent and pay the people in my shows."