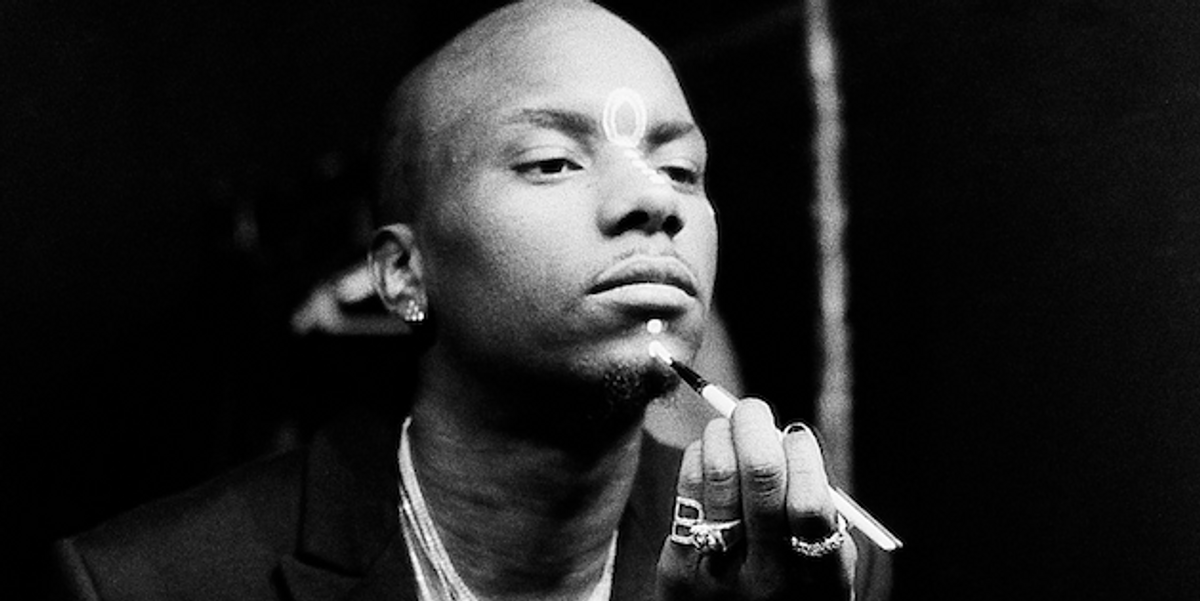 With the world's growing obsession with hip-hop, cracking the rap industry seems to have become the new American dream. To do so, many young artists are jumping on the sound already made popular by industry big wigs – the RnB/rap crossover of Drake, the auto-tuned singing style of Travis Scott, the off-beat cadences of Migos – but not Young Paris.

The French-born, American-raised Congolese rapper is not only an amalgam of three continents, but three major genres of music. He unconventionally combines EDM and Afrobeat to create hip-hop that is entirely unique to him alone. Young Paris – the stage name of Milandou Badila – rests heavily on his roots to source his style, both his mother and father were performers, as are his nine siblings. All family members paint their face with a distinct design in accordance with Congolese custom to celebrate those who've passed. After his father passed away several years ago, he adopted the tradition as part of his performance aesthetic and it's since become his signature – another element to Young Paris that has put him in a league of his own.

We got ready with the young rapper ahead of his show to celebrate Afrobeats, his new EP which is out today.

This such an exciting time for you, man. Congratulations.
It's crazy but I mean, I feel like I'm used to it. It's cool, it's fun. For me I have pretty global goals. I'm just driving the car. For this journey, I love the idea that I can use my blessings, my gifts, my history, my story to change my world. I come from very dynamic parents-

Right, because your father founded the Congolese National Ballet?
Right, he was an incredible dancer and performer. He passed, but the painting we wear he gave to me and my sibling when we were very young. The white we wear for those we lost and so when he passed I just keep wearing it. It's beautiful.

It is beautiful. So it's unique, you each got your own design?
Yeah! You'll see my siblings, we all embrace this tradition. Growing up I didn't realize I had this story, this love and community and Africa, it's the beauty of African society, even though we were bullied for it.

You were picked on?
I mean it all helps the story, but yeah all the time. But it all became a big part of me being a musician.

So you're full Congolese but born in Paris, then moved to New York.
When I was seven, yeah. I don't know all the steps were about cultivating, all these kind of steps and ideas and displaying them. Signing to Roc Nation has helped drive the next step.

Sounds like you're on treadmill – the goal keeps shifting and you keep climbing.
I know, sometimes I'm like, I need to chill with the steps and appreciate the moment. I'm always grateful but sometimes Im like, 'Why didn't I capture that moment? Why didn't I embrace that situation?'

How did that come to fruition?
Well they were following me for a year, I was throwing these cool Afrobeat parties like tonight. This guy [from Roc Nation] was watching me and coming to events and when I dropped my EP he was like 'Yo, this is fire, come to the office.' They signed me within two weeks.

That's like a fairytale.
Yeah it's cool, but even then, like, I have to tell myself that! I didn't appreciate it, I just went, 'What's next?'

I mean, that's not something I feel like you need to regret, though.
No no I don't regret anything, I mean even my father passing, that's not something I regret. If anything it reminded me we only have a little bit of time. His passing allowed me to have that mindset. Embrace the time you have, it's short. Right now you're talking to the Young Paris in full on tunnel vision. It's really hard, I can't think about breaks, I can't think about taking the day off. Every single day I'm on. Maybe if you talked to me in summer I could think about taking a vacation I don't know.

No I don't feel like that's ever going to happen. With you I can see that even when you get to an insane level you're still going to be hungry for more.
Honestly that's probably true. I have global, fucking, crazy ideas that I need to accomplish. I want to be the next, or the male Beyoncé. I think the project could get that massive.

You don't want to be the next Jay-Z?
Well there are so many queens in my family, my mother is a fucking goddess. She's a play writer and a dancer for years, she still teaches dance to this day. She's just a goddess. You'll meet her. My sisters. Just how I was raised I'm like, Beyoncé was it, I feel like maybe I could be the male version. Beyoncé, like, the complexity she offers to the industry is my approach. Much like Drake in a way, I could relate to the singing and the rap and the fashion and the music and the art and the business. I'm really trying to tackle all these different things. Also Beyoncé is a virgo and I'm a virgo.

You're a virgo? I see it – perfectionist.
Oh yeah. There are definitely moments I have to tell myself to chill the fuck out. Vibe with people. Michael Jackson was a virgo. I mean, we're detail-orientated. We're strategic.


Let me guess, you're always on time?
I'm on time for everything. Always on time. I understand the Michael Jackson and Beyoncé mindset because I'm a virgo. I look at her and I see what she's doing. She's on it because she's a fucking virgo. I think astrology is so important because it really plays a part in how people do what they're doing.

Do you ever get to really release, though? That's a lot of pressure to put your yourself.
Yeah, I cry all the time.

When was the last time you cried?
Last week. My mum invited me out for a family day, god it looks like I'm crying now. I'm not. We were drumming to celebrate my father and I was just, crying. Drumming and fucking pouring tears.

What, how is your family this cool?!
Oh we're like the coolest family you'll ever meet. There are 10 of us, we do everything together.

What do they think of you, blowing up like this?
I mean, they're all part of it. We push each other, they're not a part of the industry like I am but for me the industry is a tool for what I want to accomplish.

They're not into the industry?
That's a very good question actually. No. They don't need it and I need it. I like it, I like the game.

Have you told Jay-Z you want to be the next Beyonce?
Nah, I don't know how he would take that shit. He's aloof. He's just like, "I like this, this is dope."

What are listening sessions like with someone like that?
Well it's crazy as an artist, you can get a million compliments and the one negative comment, one asshole will stick with you. If one guy doesn't like a song you cut a song. I've been among artists and one guy doesn't like one song and they just cut it. I don't want to say who it was.

Have you ever experienced that kind of rejection? How would you respond to something like that?
Well see I haven't had a lot of hate. I don't even know. Like I can't even imagine something like that. I'm sure it will happen eventually it just hasn't to me yet, but nothing would change. If I like something I like it. In my career, we get turned down. I'm able to eat it. I'm always going to be on this dope shit, do all these crazy things. Your comment is for the moment but I'm going to be back to my life tomorrow. I'm always going to be Young Paris.

All images by Patricia Ellah