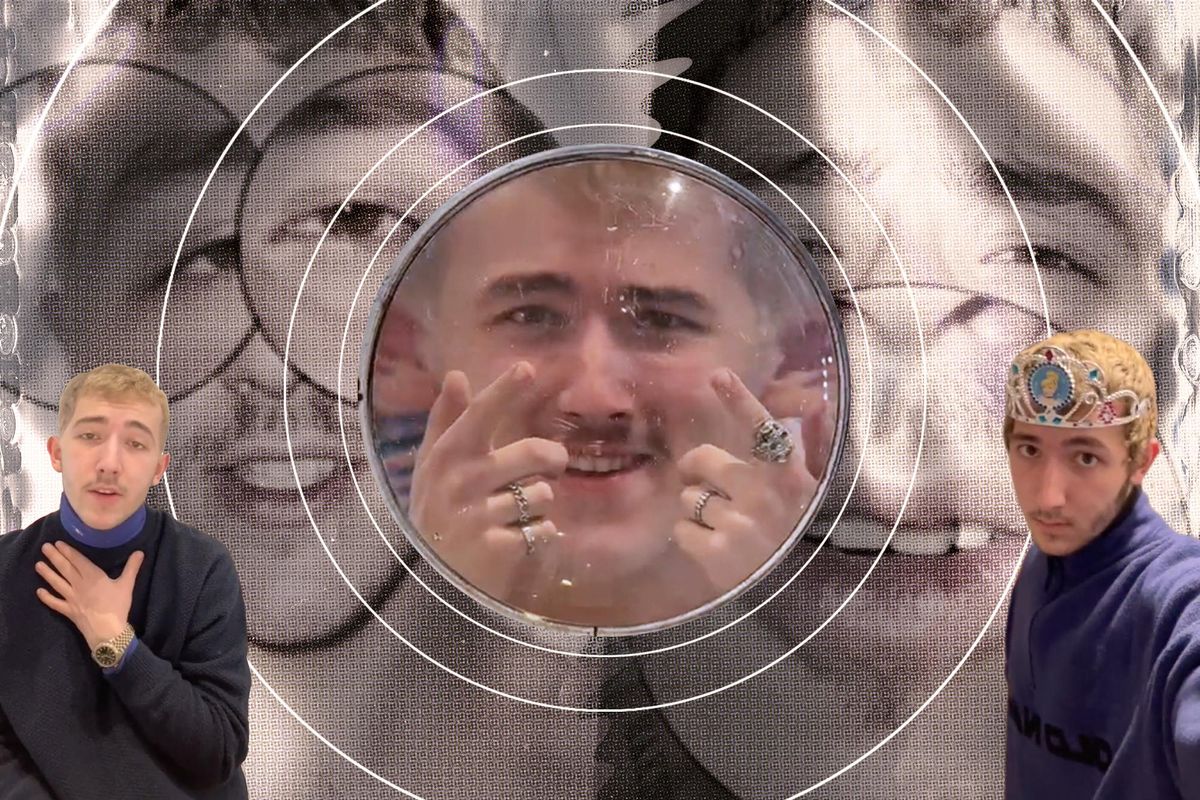 Frankie Is Now the Most Famous Jonas

For many Gen Z-ers, Frankie Jonas has become an icon in his own right — and it's all thanks to TikTok.

In the span of a few months, the younger brother of Nick, Joe, and Kevin Jonas has quickly accrued his own fervent following thanks to his self-deprecating jokes, outlandish stunts and extreme commitment to the bit. But whether it's hurling himself off a 10-foot rock, crying in the bathroom or tattooing Tana Mongeau's name on his leg, if there was ever a platform where his "nihilistic, chaotic and entropic" content would thrive, it'd most definitely be the Gen Z-dominated app.

"I think Gen Z has a very specific language that we've grown up in. And every generation thinks it's so astronomically different than the last one, but ours feels so much faster and sarcastic with a nihilistic twist that makes other people confused," Frankie said when asked about what's behind his newfound virality. "It can be harder sometimes for me to make content for voices outside of my generation, but I think that I'm able to bridge it in some regards to a place where it's acceptable."

After all, raised on a steady diet of Reddit threads, 4chan boards and Eric Andre, it comes as little surprise that his off-kilter sense of humor tends towards the absurdist, sardonic and self-effacing. Granted, while his brand of uniquely unhinged comedy has been able to find its home on TikTok, Frankie — who only started his account this past fall — admitted that the platform's reputation as "the dancing app for children" meant he was against joining it for a very long time.

"I kind of didn't get it and thought I was super cool for not having an account — that I was like this counterculture, 'I'm against the man, yo!' [kind of person]," he laughed, before explaining that he only downloaded the app after finally getting "called out pretty hard by [his] girlfriend" for constantly sending her old TikToks that had been reposted to Instagram.

"So I downloaded it and after two hours, I woke up from a For You Page coma. And then I made my first video and just became obsessed," Frankie said. "A monster was made in a day and I just didn't stop. I couldn't stop scrolling and making videos, and eventually it blew up."

Initially though, Frankie said he started off by just "making whatever [he] wanted," which was refreshing as it "felt like nobody was watching." His account really began to take off in November after he started making videos spoofing a couple viral challenges, including the celebrity lookalike trend using a photo of — you guessed it — his brothers.

"I made a video about my brothers thinking that no one's going to see it and that it was just going to be for me doing a trend. Then people saw it and people thought it was funny," he said, before mentioning another video in which he referenced his 2016 marijuana citation as a way of "introducing himself as his high school rumor."

"That was sort of this moment of 'Oh, wait. I'm doing my own thing and it's working and it feels good and it's exciting,'" Frankie continued. "That was a big moment for me, and then I just kept making whatever I thought was funny, because suddenly there were all these people who were also enjoying it."

However, as someone who grew up with "weird feelings about being in the public eye" and has always felt somewhat ambivalent about social media, Frankie also said he was initially "confused" by his online popularity, explaining that it all felt "so based in this other world that I wasn't familiar or comfortable with." Because of this though, he's still continually surprised by things like having a "militarized force of Gen Z fans" and getting his very own WikiFeet page, not to mention the way his brothers' are now jokingly referred to as "Frankie's brothers" across the app.

"The biggest 'Oh, shit' moment of this whole thing was the night that [Nick posted on] TikTok, and his comment section was filled with people spamming him saying, 'Aren't you Frankie's older brother?,'" he said with a hint of lingering disbelief. "And I just sat there, I didn't sleep all night. So I was like, 'Wait, I had nothing to do with this. This is completely out of my hands.'"

But what does his family think about all of the jokes? Well, according to Frankie, they've all been "really supportive" of his rise to social media stardom, as proven by a handful of TikToks duets and videos featuring cameos from his brothers.

"We have a really close-knit family, and I think everything has just been attempted to be in good taste and with the eyes of fun," he explained. "But they kind of love it. I mean, they're excited for me that I'm enjoying myself. The whole thing is exciting."

Granted, what's been equally as exciting is the support he's received from his new TikTok community, who he said encourages you to be your weird self and embrace that wholeheartedly.

"I love it and I'm so grateful. It's such a wild, wild ride," Frankie said, before taking a moment to marvel at the "fascinating idea" that he's been able to find an online niche that loves him for his eccentric sense of humor. "I think the craziest thing has been being able to form connections with people online and with this community by being myself. And that, to me, is so incredible and something that I genuinely thought might not ever be possible."

He went on to laugh, "So I'll generally just continue to make a fool of myself on the internet as much as possible, and for as long as people are willing to laugh at my burps and my farts and my twerks and my shitty Gen Z humor."