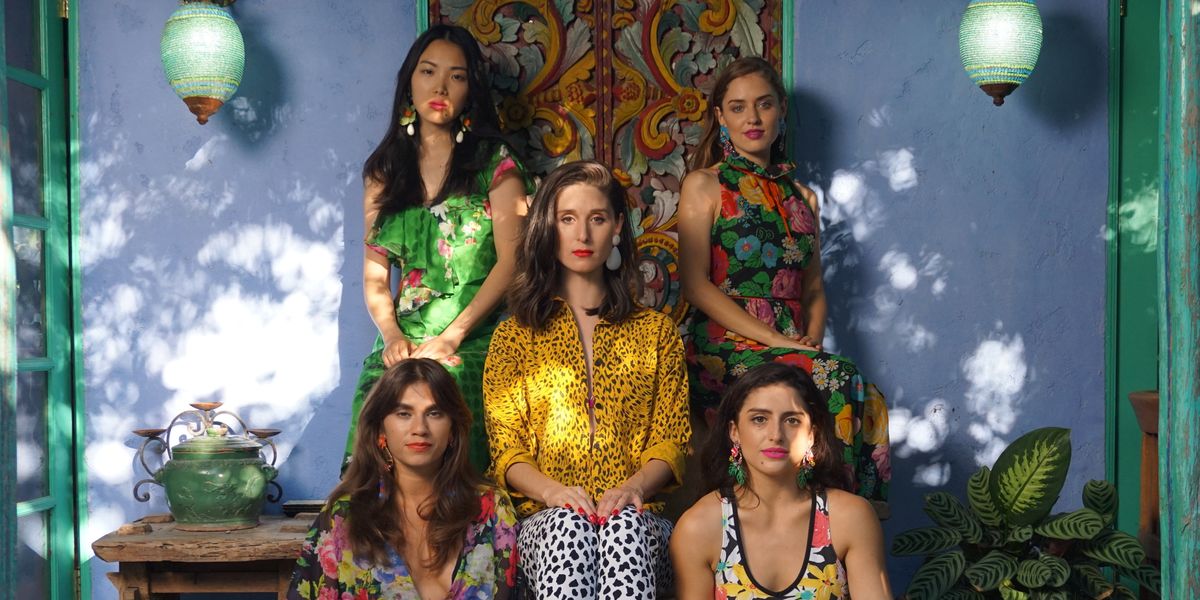 When PAPER reached out to Francisca Valenzuela for an interview, to our surprise, she responded — as in it was Valenzuela herself who initially fielded our request. How is this possible? Between songwriting, recording, releasing music on her own label (Frantastic Records), touring, and promoting, plus organizing workshops, fests, and other projects for Ruidosa, the feminist Latinx collective she founded, it's bewildering that the Chilean pop artist-activist manages to be so hands-on.

She laughs heartily when we bring this up. Chatting by phone, Valenzuela is unhurried and kind, even though we've interrupted a studio session. A helpful team supports her, of course, but it's a small group, splitting headquarters between Santiago, Mexico City, and L.A., where she now lives part-time. Still, Valenzuela says her "fingerprints are all over everything."

That includes directing videos too, saturating them with her self-described "colorful classic" aesthetic. Even with a dramatic ballad like "Ya No Se Trata de Ti," the video for which dropped late last week, Valenzuela incorporates vibrant visuals that, especially toward the song's uplifting ending, also mirror the striking pattern play, primary color pops, and mixing of androgynous silhouettes with femme accents of her personal fashion leanings.

For the premium indulgence in that mix, though, see the clip for "Tómame," a minimalist piece of dance-pop perfection released a few months back. Both the song and video flow like a measured but continually exciting fireworks display. (Tip for English-language folks: The titillating lyrics are translated for you. Hit that closed captions button for this one, and for "Ya No Se Trata de Ti," too).

In the conversation below, Valenzuela tells PAPER more about her recent videos, bringing in a crew of girls in those clips and for live performances, and living bi-culturally, in both L.A. and Santiago.

Let's talk about "Ya No Se Trata de Ti," and the message behind it. I really love the video, too.

It's pretty self-explanatory in the sense that it's a very confessional song. It's based on the visceral, emotional feeling, and confessional, almost journalist writing, which sometimes I tend to do in songs. And it's about being in a situation whether with a person or someone, or a period of time, which could be damaging — situations we've all been through where you bring yourself down because of the situation. It's hard to overcome it, then finally you're able to. For me, it was very personal in the sense that a while after a relationship I had, I was like, wow, that was a pretty toxic relationship that really made me feel bad about myself. All these things that really were pretty embedded in my way of thinking — it took me a minute to understand that it had to do with someone else, and that I could feel better, and grow up, and understand what happened.

It was one of those songs that came out in one sitting: very spontaneous, like 10 AM in pajamas with coffee, just me and the mic and the keyboard, very intimate. I felt it was very special because of the fact that it was a hopeful song, in the end. It wasn't just a song about being sad or being upset or being angry, but also about being like, you know what? I can overcome whatever damage or whatever harm came my way.

It's when you're on the other side that you can see things for what they really were, sometimes. And then you can start to move on.

One hundred percent. I mean, it's also because it's so nuanced. Also it's hard to understand things as they happen, and it really takes a second to just take a step back, then understand and rationalize what happened, and place it properly. Your memories and your body and your mind and your heart — sometimes I feel like [you're] pushing through life and you can't take a second to adjust it all.

Can you tell us about the video? Were you very involved in creating it?

Yeah, I directed the video. I also directed the previous video, "Tómame." So I'm very involved. Not only did I direct the video, but they were independent releases, so basically we put it together and released it as well. For this video in particular, I knew I wanted to do something that was very performative, and very expressive, very emotional, but also very beautiful. I wanted to have an arc, so I wanted to start in a more vulnerable, a bit more broken, a bit darker place, and that's represented in the interior, dark quote-unquote house, then it opens up into the evocative outdoor moment to have more of a lightness, air, space and energy. Then the performance opens up and is a bit brighter, happier and hopeful.

Related | Jarina De Marco Will Not Hide Her 'Face'

What about the crew in "Tómame"? That video is so fun. Do you usually work with the same group of dancers?

In "Tómame" and "Ya No Se Trata de Ti," I worked with a friend of mine who's a choreographer and a dancer who's called Genna Moroni, she's awesome. She's from L.A. She's incredible. We became friends through another mutual friend, Jarina de Marco.

I had this idea where I wanted the sofa choreography and the stage choreography, and I also wanted to play with minimal elements in choreography. Because I'm not a dancer per se, [I wanted to] do something a bit more simple that was synchronized movements, and so together we made it. In "Tómame" we have three other dancers — we've done collaborations with different dancers, but Genna's been involved with both, and she's helped me recruit and put together this amazing team of dancers which do all sort of things, all amazing.

For the live show I worked with another choreographer who's from Chile called Brigitte Kattan; she actually lived in Mexico City, does a whole bunch of stuff. Now we're doing a live show together with live dancers, and it's really fun. It's the first time I have dancers on stage, the first time I have a female crew with me on the stage, so for sure it's been this whole discovery, this energy of performing with other women who are so talented and professional and beautiful and supportive. It really did change the experience of a performance and professional aspect for me.

You're currently splitting time between L.A. and Santiago, right?

It's a nomadic life — it's wherever the work will take us, but for sure, I try to keep both places activated. In Santiago, I fly back and I have my team there, and I plug in and we perform and do all sorts of stuff, and for Ruidosa, whether it's projects or music. Here in L.A. it's been more the creative back-end stuff, as well as exploring new possibilities and collaborating. Being in the northern hemisphere, [I'm] a bit closer to other places; Chile is amazing, but it's very isolated and very far away, so you are doing many things there and it thrives, but it's also a bit off the beaten path of the industry, in a way.

It's a unique time to be living in L.A., yeah? The U.S. is an especially precarious place for Latinx people right now.

But yeah, it's interesting, because at least my personal [feeling] with the U.S. is that, being bicultural from Chile and the U.S., I do feel a dissonance constantly. There's so many positive attributes and I feel very connected to so many things, but at the same time, it's a constant dissonance. Now, more than ever, it's all a mess. But at the same time, I'm so excited to see people be activated and people in the U.S. really throwing themselves all in to changing things, which is very inspiring. I hadn't seen — at least in my lifetime — people my age being that involved before.

I appreciate that you point out the bright side.

We had a Ruidosa panel at the Girlschool Festival last year, and that's one thing I was saying: If there's one positive thing I do see, it's that there's a curiosity and an activation that I've never seen before. People are asking, How did other countries do it when they faced authoritarian people in power? What happened in other people's biographies and stories, and what happens when you migrate and other stories. The empathetic muscle was activated, and the curiosity was activated. Before, there was a bit more of a feeling of gliding through a little bit less aware of the world, and now that that has changed. It's interesting and it's exciting also.