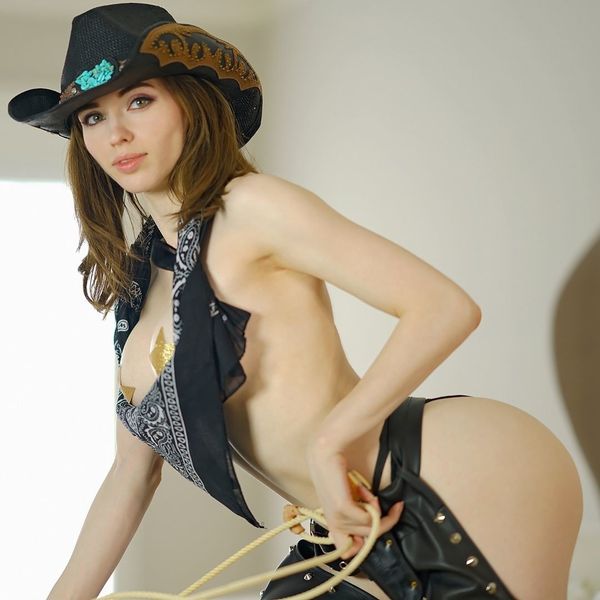 You see someone's face on your feed every day, but do you really know them? Follow or Be Lost is a series in which we find out fast facts about the internet's most popular people.

Cosplayer and Twitch streaming personality Amouranth, otherwise known as Kaitlyn, has been making costumes and internet content since 2010. She has a flourishing Patreon page and hyper-dedicated fan base who pay good money for exclusive Google hangouts, NSFW pictures and videos, and Discord sessions. Singing, gaming, ASMR... she pretty much does it all, and with millions of people watching.

Here’s what else to know about her.

What's your star sign, and do you fit the stereotypes?

Sagittarius, I think mostly yes. Though perhaps due to my costuming background, I kind of like details. I'm not strictly “big picture."

According to Facebook, what's your childhood crush up to these days?

I had to really rack my brain to remember the name. We're not Facebook friends, but it looks to be something either fitness or youth ministry related.

What role do you play in the group chat?

I'm kind of a troll, or the person who always says something offbeat and wacky.

What makes you happiest?

Dogs, reptiles, interesting critters, making art, and lying around doing nothing. Hanging out with friends comes a close second.

What makes you saddest?

The feeling of not moving forward, or the thought of watching my life go past without doing something interesting with it.

I LOVE GAME OF THRONES, but I binge a lot of “for kids" shows by Disney or nostalgic remakes — Fuller House on Netflix, etc.

You're a college professor. What subject do you teach?

Wasps, or something bad happening to my fur babies.

Have you ever been in love?

Ehhh. I don't think it was love, haha.

Who is the best Kardashian?

Depending on who the mastermind is behind the makeup brand, either Kylie Jenner or Kris Jenner. I don't really follow them much, but my variant take is that I think Kim and Kanye are probably more qualified to teach an MBA level marketing class than most academics actually in the role.

Who is your favorite Jonas Brother?

Nick Jonas, because he had a stint on the stage production of Les Mis.

What's your first memory of the internet?

"If I was on a desert island I'd rather have an internet connection, a computer or television, and some games."

If you were elected president, what's the first law you'd enact?

If I was on a desert island I'd rather have an internet connection, a computer or television, and some games.

What song were you obsessed with age 13?

It was probably something that looking back sounds ridiculous, like “Touch My Body."

What's the last thing you spent more than $10 on?

A new router from Costco!

What do you do for self care?

I work out pretty religiously!

Copy and paste the last message you sent.

How dare you not offer me a cookie DRACARYS.

You're leaving the house in a hurry. Which outfit do you reach for?

Who will you never unfollow?

A bunch of amazing cosplay girls and people from my community, most notably Jessica Nigri.

What was the last lie you told?

It was definitely something time related, or maybe saying “I'm on my way." I'm always late.