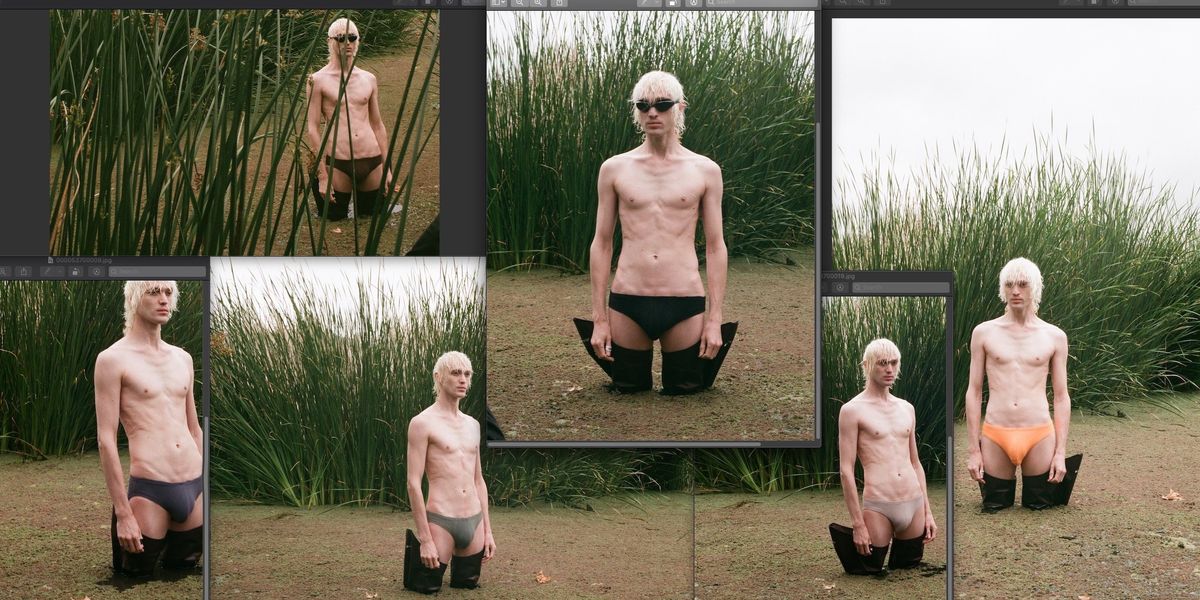 FlexSport is barely there, not in concept or intention, but definitely in fabric — and that's exactly how Cody Allen likes it. The Los Angeles stylist's debut brand looks like it could outfit a Texaco cashier's discreet lunch break hookup, or the gay BFF that never was on Paris and Nicole's Simple Life road trip.

"The inspiration is really this intersection of being queer and growing up in the South," says Allen, who was raised in "literally nowhere" from a Texas trailer "on the outskirts of San Antonio" (Between Leon Valley and Helotes, to be specific).

In its first iteration, FlexSport centers on swimwear and underwear with a simple brief and thong in neutral tones like brown, black and beige (a bright tangerine is the most color available, right now). A double strap tank rounds out this three-style drop, offered in the same six colors. "I found a beautiful ribbed spandex that mimics cotton rib," Allen says of its material. "The boys are loving a speedo this summer, so I figured it was the perfect time to give them a cooler version."

Having previously worked as a stylist on major projects from Beychella to the singer's On The Run II tour, Allen's decision to create his own independent brand came as a "product of quarantine." He says, "I've always wanted to have my own swimwear line — something sexy and cool — but never really found the time to do it. When the world started changing, I started to realize how important it was that I evolved, as well."

So he slowly developed and unveiled FlexSport in early August through a shoot that features one model — with wet, bleached hair — posing half-naked inside a swamp and wearing thigh-high rubber boots. This outback look underscores Allen's brand name, which he wanted to feel like a camo hat you'd find at a truck stop. "You grab the tag, flip it over and it's probably gonna be named FlexSport," he says.

Having escaped a world where these references exist without irony, Allen is able to finally reclaim — and manipulate — a style that was previously everyday for him and his family. "Growing up with a gay hating family, in a gay hating suburb, you're constantly told all the things you can't do or shouldn't be doing," Allen says of his breakout brand. "This is just one of those things that over years of separating myself from that I realized I can do."

Allen pulls inspiration today from the life he once rejected: "Rural places, the country and truck stops like Buc-ee's" — a moodboard that clearly reflects the self-aware trashiness of FlexSport's premier range. Growing up, he remembers "wrestling pigs in the mud, riding ATVs and shooting guns," which is a far cry from his LA lifestyle though Allen says it's become an aesthetic he "can't quite shake."

With future FlexSport drops of new colorways and styles planned for the rest of 2020, Allen is confident of one thing: "You are going to see a lot of country boy come out through this project."