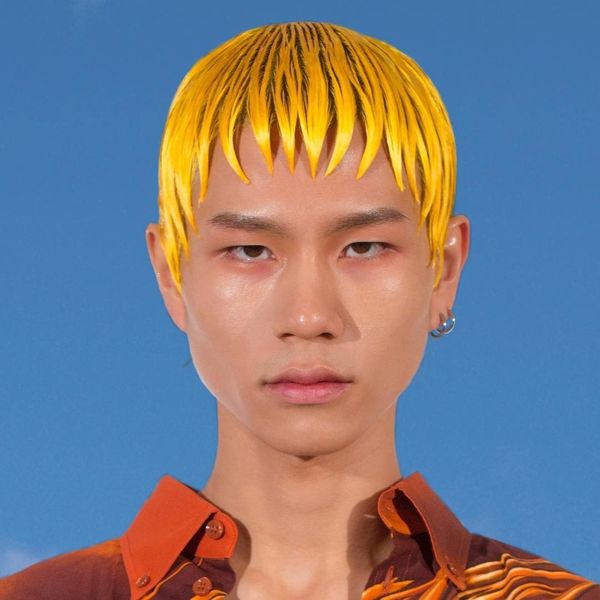 Beauty as an industry has blown up in the past few years, with new brands and makeup artists popping up everyday. But among the carefully curated images of perfectly contoured faces are young artists speaking for an otherwise marginalized and ignored group of people. These nano influencers who boast followers in the thousands not only represent an array of queer identities, but do so in consistently unique ways.

Their work more often than not borders on ghoulish and weird, but it's also part of their persona. What is beauty? Why do we continue to uphold and push identical ideas around it? And how much of our perception of what's appealing and what's not, is rooted in social conditioning? These young artists will make you reflect on all these questions.

For Pride, PAPER picks five young and queer trailblazers breaking every old standard of beauty that you should be following.

Ryon Wu's aesthetic isn't the easiest to describe. The California-based artist whose Instagram contains of a series of futuristic images waits tables by the day at his parent's restaurant along with creating music videos, and modeling on the side. Originally of Chinese-Vietnamese heritage, Wu uses makeup and fashion to channel his tech-fueled, ultra modern looks that often resemble an anime character. The cyborg aesthetic is further enhanced with his slick and gelled strands of hair and most images are set against unusual backgrounds featuring nuclear power stations and trees during a hurricane. In his own words, the artist says he feels at his most "powerful" when his photoshopped images make him look like an otherworldly creature.

Ever since "discovering" makeup at 16, 19-year-old Cupid has employed it to create looks that are both shocking and creative. Nothing's off limits to the young artist including flowers, latex ears, and crafty jewelry. Even though the objects glued to his face might seem random, there is an intense amount of planning and precision involved in the 3D beauty creations. It's also why Cupid sees his work as more art and less just makeup. The young makeup artist also sees his work as less makeup and more art, often referring to it as his "second skin. "That's why my basic makeup routine consists of 'simple' designs such as tribals, plus some fake piercings, lip gloss and eyebrow gel," he says in an interview.

Kahn's signature style blends club culture with makeup to create what he calls the "original four-eyed fantasy." Gloriously painted eyes along with exaggerated lips form Kahn's over-the-top yet stunning aesthetic dominate most of his Instagram. If you're, however, still confused about his brand, anime themes are at the heart of Kahn's work as is reality distortion. There's no one particular or consistent background either. From parks to literally a toilet flush, his work isn't meant to make you feel comfortable but simply mesmerize and challenge your perception of beauty.

Otherworldliness is embedded in every fragment of Tomasayn Hayes' work, including her clothing line Rip & Tears. But with her Instagram handle, she elevates it to another level. The dynamic makeup artist and model presents her identity with a blend of dark eyeshadows smeared across her cheeks in a dreary fashion and actual "puppy eyes" edited on to her pictures. With her transformative body of work, Hayes aims to shackle free from standard conformities within beauty.

Jazmin Bean deem themselves a "genderless monster." Why? Well, one look at the London-based artist's may both scare you and answer your question. But Bin doesn't care. Their extreme looks that comprise of crazy contact lenses and demented doll faces embrace weirdness in all its realness, and delivers it through carefully painted black lips and extra large lashes. Crafting an alternative reality, Bean has created a mythological persona that is here to stay and thrive.