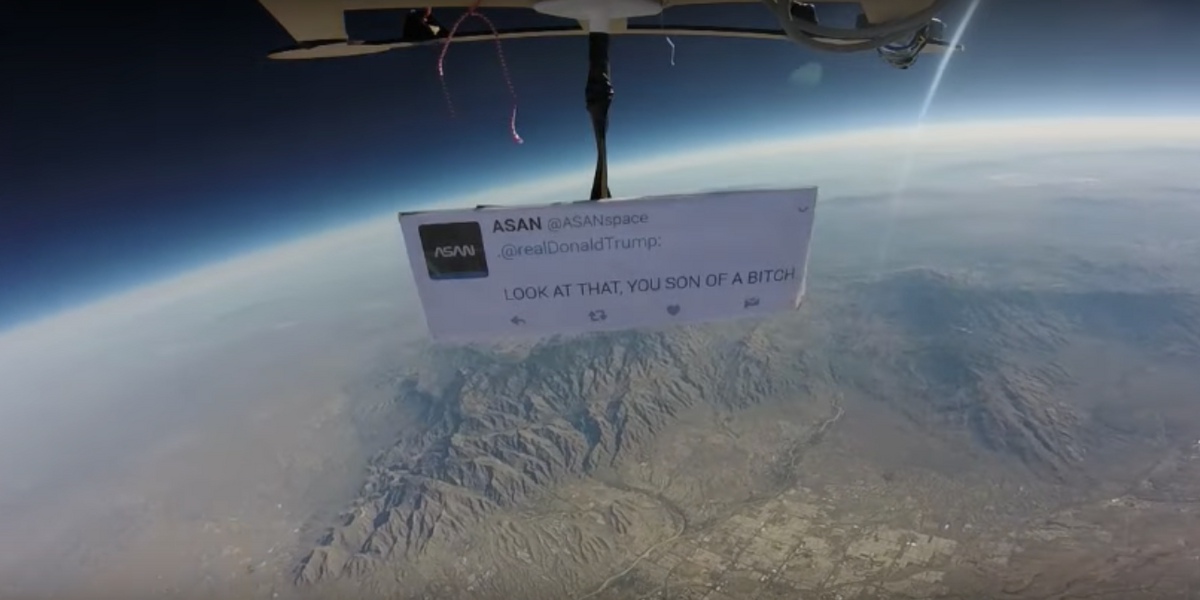 Apollo 14 astronaut Edgar Mitchell, the sixth person (of only twelve) to walk on the Moon, once famously commented on how seeing the earth from outer space immediately and irrevocably changes one's perspective on terrestrial politics.

"You develop an instant global consciousness, a people orientation, an intense dissatisfaction with the state of the world, and a compulsion to do something about it," Mitchell said. "From out there on the moon, international politics look so petty. You want to grab a politician by the scruff of the neck and drag him a quarter of a million miles out and say, 'Look at that, you son of a bitch."

Though Mitchell passed away last year at the age of 85, a new generation of space travelers has taken up his activist mantle. The Autonomous Space Agency Network (ASAN, or "NASA" backwards), used its platform as the indie version of NASA to protest Donald Trump from outer space (or at least, near-space). Though the team still used what has proven to be the most effective line of communication to reach the president, Twitter, they did so on a grand scale, printing out a giant picture of a tweet and hooking it to a weather balloon at 90,000 feet.

The tweet, addressed to @realDonalTrump, quotes the famous Mitchell line, "LOOK AT THAT, YOU SON OF A BITCH." Aside from bringing the late astronaut's words to life, ASAN is also likely protesting Trump's proposals to cut funding for NASA and other scientific research, particularly when it's related to climate change.