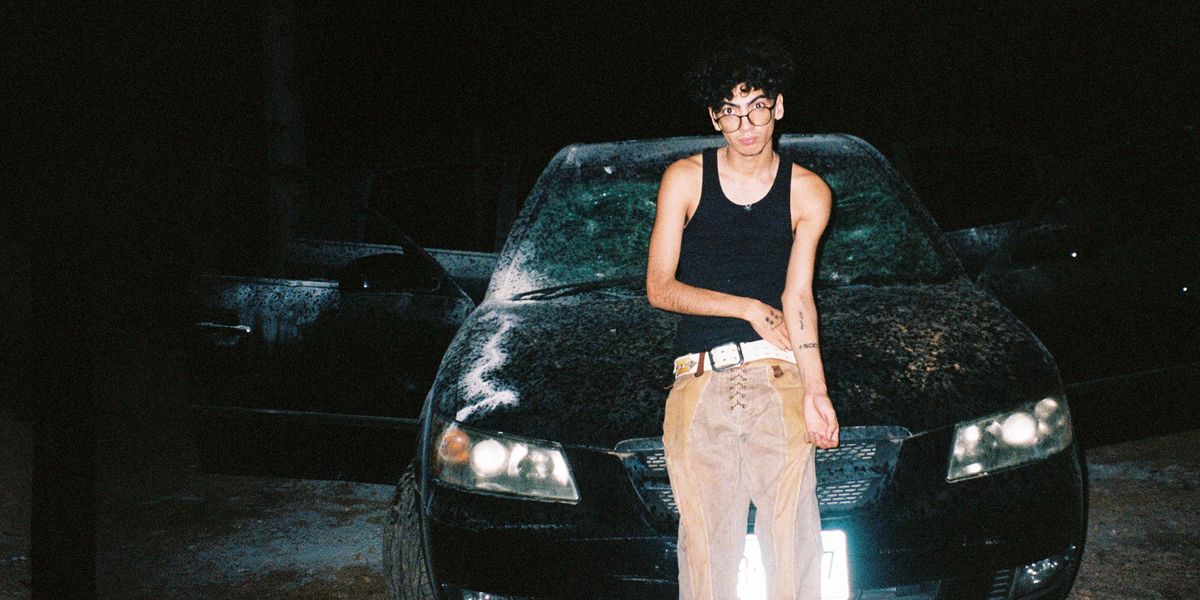 When Addison Rae was asked by MTV who she'd make a fan account for if she had to, the TikTok sensation-turned-pop star chose ericdoa, the 18-year-old who's quickly bubbling up as a major pop music disruptor. "He's kind of like a cool new artist," she said, shouting him out. "I think his music is awesome."

She's referring to ericdoa's major label 2021 debut, "fantasize," which has more recently been followed up with "back n forth" — an explosive track arriving alongside a music video that, quite literally, sees him blowing up his own 2008 Hyundai.

The song structure mirrors its title, written by ericdoa as a spiraling back and forth between him and his lover. "I tried to make it work, but it takes a turn for the worst," he sings of their relationship. "I can feel you crawlin' around in my head." Then, on the chorus, she replies, "Boy, you don't deserve me," before declaring, "I fucking hate all you men."

For ericdoa, his failing car brings these ideas to life, with its 117,000 miles and everything broken from the AC to sunroof and radio. While he's had it since the beginning of high school, the four-door sedan was quickly becoming a safety issue and ultimately needed to be put to rest.

Which is why for the Oliver Cannon-directed visual, ericdoa drives his Hyundai into an Atlanta forest before busting all the windows and loading up the entire thing with fireworks. "I feel like I'm finally free," the stuntman sings, smiling in front of manic bursts. "Somewhere where I need to be."

Below, ericdoa explains the metaphor behind his "back n forth" video and updates PAPER on whether or not he plans to replace his newly destroyed vehicle.

How long have you had the car featured in this video and why'd you decide to blow it up?

I've had this car since the beginning of my sophomore year of high school. The vehicle was actually beginning to be a safety issue [laughs], so many issues that I can go on about, but it needed to be laid to rest. However, the car acts as a metaphor as something that holds value in your life. Even when it begins to break down, it's so hard to let go even after causing you so many issues.

What was the production process like making the "back n forth" video?

My beautiful friends down at Shot Clock, a production company based out of New York City, really helped make the vision of the video come about. My manager and I usually come up with the ideas for the videos, and after complaining about my car for a substantial amount of weeks we both figured out what we wanted to do immediately. We filmed all of it at a horse stable in Atlanta close to where I reside.

"The car acts as a metaphor as something that holds value in your life. Even when it begins to break down, it's so hard to let go."

How does the video treatment help round out your song's message?

The song is structured as a "back n forth" with a person that you debate staying with and devoting your time to — the twists and turns through being dragged through a mentally draining relationship. The car acts as something we all have that may seem like a great thing to have in the beginning, but after so much wear it can cause issues for our well-being.

What's your favorite memory from filming? Was it scary performing in front of an explosion?

That is exactly what my favorite part was [laughs]. After getting a safety speech from the pyrotechnic team, I was actually baffled that I very much indeed almost got blown up along with my car. I remember we did a second take of the fireworks literally just going off behind me. It got so bad that they were like projectiles and I had to hide behind a set assistant's big ass Ford F250.

It's too simple to group you into one larger genre. How do you describe the music you make?

Simply just music, to be honest. It's been described as so many things as of recent — my favorite being "dumpster fire," shit had me in tears — but what me and my team of friends are creating is simply us in music form. We all understand that it isn't contemporary, but come on aren't you guys tired of that?

What was significant about creating this track?

I made this song, actually, in a Star-Wars themed room in Orlando on one of my first ever trips we took to make music. Fortuneswan — also known as Rickie — is based out of there and I loved working with them, so we decided to take the drive and all stay in this Airbnb to work together. I worked on it with fortuneswan, Glasear, KimJ and myself.

"What me and my team of friends are creating is simply us in music form."

In my opinion, Hyperpop is made up. I believe it's a blanket term to make people who are confused about what it is, more comfortable. Do I hate being called a hyperpop artist? Eh, but if that helps people not be anxious into exploring something that is obviously genre-less then so be it. We just be making music, for real.

Finally, did you get a replacement car?

I wish! I'm wild scared, to be frankly honest, because I hate spending money and car salesmen are scary. However, I need to be able to transport myself, so as soon as I can, ima try.