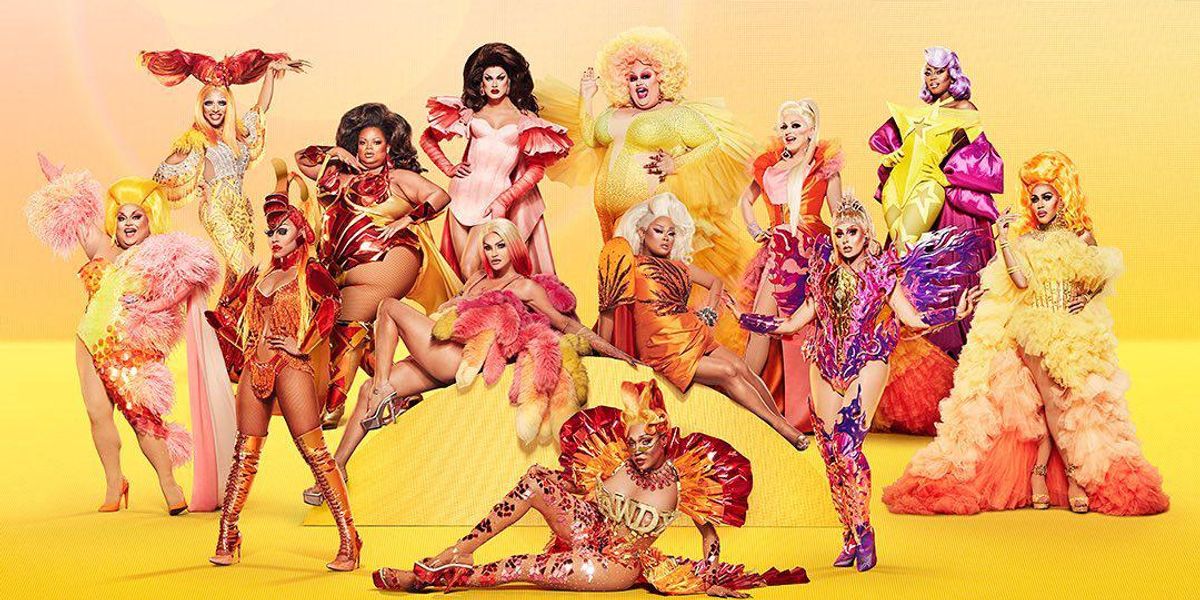 As if four straight months of Season 13 wasn't enough for you, get ready to dive back into the Drag Race deep-end because RuPaul's Drag Race All Stars is back for its sixth season — just in time for summer. The show announced its new lineup of queens returning from previous seasons to vie for a shot at Ru-demption and a chance at the coveted All Stars crown. Featuring a fairly sizable season 11 contingent and a couple of contenders returning for the third go-around, this season of All Stars seems to have a fairly even spread from comedy queens like Ginger Minj and Pandora Boxx to look queens like Scarlet Envy and Kylie Sonique Love, lip sync assassins such as Trinity K. Bonet and more than a few drama queens that's sure to make for some juicy Untuckeds.

Making the leap from VH1 to the new streaming service, Paramount+, the new season of All Stars is set to premiere with back-to-back episodes June 24, with a new episode streaming every Thursday. Meet the full lineup of Season 6 queens below:

Entrance tagline: "The one most fit to meet all the criteria, screw all that. Just say 'hey Miss Akeria!'"

The season 11 top four queen, A'keria C. Davenport showed us that not only did she have the Body but the talent to back it all up as well. The well rounded queen (and ass) is back and ready to go the distance this time around.

The elephant queen of season 9 and 10 made it all the way to the top three in her most recent outing and showed the world that the pageant queen with a big personality and a busted knee could be a fierce contender. Hopefully for her, third time really is the charm.

Season 4's Jiggly Caliente admits that her insecurities held her back in her original run on the show but this time around, the much-adored queen promises she's back out in full force and determined to snatch that crown.

Ready to feel the Jan-tasy one more time? Jan is back and ready to take things down a notch after coming across as too intense and overeager as she did on season 12. Just don't try to get in the way of her finally winning a Rusical challenge.

Entrance tagline: "Your salty homegirl is back and sweeter than before."

Even Ra'Jah O'Hara recognizes that she came across as a bit of a bitch on her season. Does that mean she's going to change? Who knows! But the gloves are off and the shady season 11 contestant is ready to take that prize.

From the top three of season 7, to the bottom four of All Stars 2, Ginger Minj's run on Drag Race has had it's fair share of ups and downs but this self-processed glamour toad with a razor sharp wit is sure to prove to be stiff competition her third time around.

Entrance tagline: "Awoooooooooo, I hope you like it doggy style!"

Having made it to the top four in season 3 and had a strong run on the first season of All-Stars, the Puerto Rican showgirl, and former Miss Congeniality, Yara Sofia is bringing back her quirky sense of humor and glamorous style back to the runway with hopefully plenty more "echa pa'lante"s.

Entrance tagline: "Season 11 I came for the lunch. All Stars 6, I'm coming for the dinner. Look out bitch, I am your winner."

"Big Silk with the good milk" is back after placing in the top four of season 11 and while she may have had a few hit-or-miss runways in her original, she more than made up for it with a larger-than-life personality and this time around is determined to focus even more on herself and her drag.

Entrance tagline: "I have a box for delivery, but I heard you only accept them in the rear."

The season 2 comedy queen and the less-than-enthused All Stars 1 contestant, Seattle's Pandora Boxx is hoping she'll be going a lot further this time around without Mimi Imfurst weighing her down.

Entrance Tagline: "Off to the races!"

She may have been thrown under the bus by all of her teammates on Season 11, but we all know everyone loves Scarlet Envy and fortunately the feeling's mutual. Having shown off some strong looks on her previous season and demonstrated some promising acting chops, it should be exciting to see how this New York queen has elevated her game for All Stars.

The young "Wigstress" of season 5, Serena ChaCha now has had a few more years of experience tucked under her belt in the interim. Having found success with her wig business and as a makeup artist, ChaCha no doubt will be serving some serious looks this season.

This season 2 queen is ready to re-introduce herself. She might have a new name but her status as a bombshell beauty still stands and she's been itching for a second chance at that crown.

Entrance Tagline: "You know that I'm fucked up, right?!"

The lip sync assassin of season 6 may have psyched herself out the first time around but since then she's overcome her own inner saboteur and is determined to finish what she started.