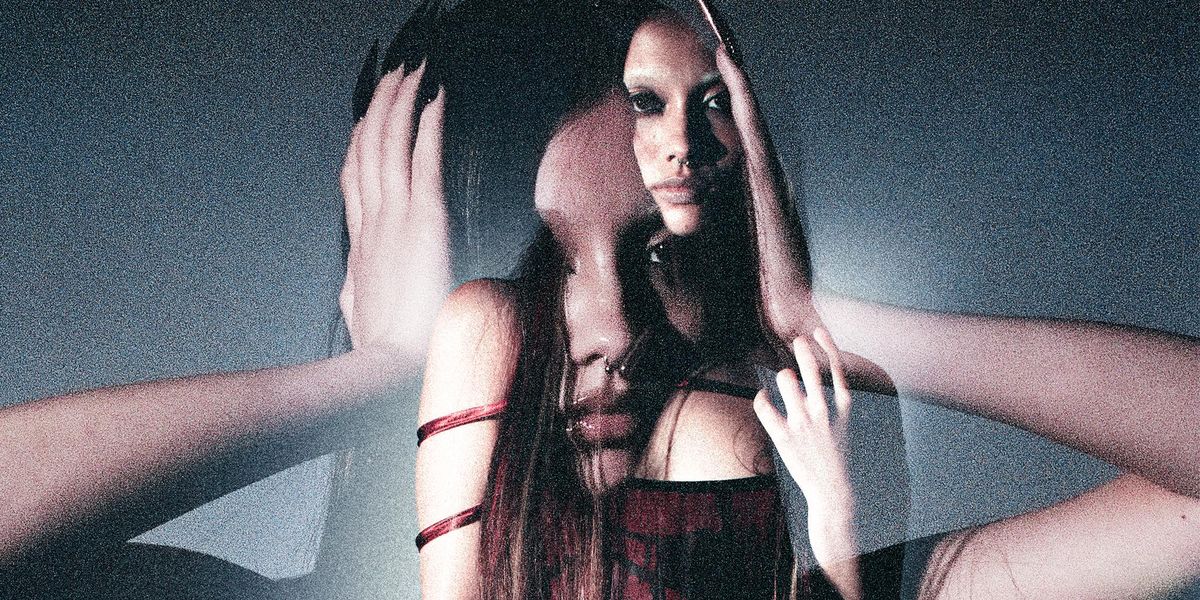 Emo princess daine broke into 2021 with a fresh, new sound on her ericdoa-assisted single, "boys wanna txt" — a testament to her willingness to burn her own rulebook. Where the Filipino-Australian artist's music thus far has leaned into more emo, brooding pop cuts, this Dylan Brady co-production thrust her into the rapid-fire, glitchy world of internet electronica. And it's perfectly bubblegum and bitchy, just in time for the summer of our lives.

This sonic shift is in large part due to her quarantine party series, Nocturne, which became a regular space for musicians — from ethel cain to umru — to showcase their work and build community in a time when connection was nonexistent. It's also where Charli XCX famously surprise dropped in to perform her True Romance cult favorite, "Stay Away," for a special Halloween edition.

But don't expect the bright, cheeky attitude of "boys wanna txt" to stick. Though she's been busy making more music, daine finds it "really hard" to write happy-sounding songs. "I don't think the fun arrogance I executed with ['boys wanna txt'] is gonna be a reoccurring thing," she says. "So we're back to sad angry catharsis in my unreleased catalogue. Can't wait to unleash it."

Until then, PAPER caught up with daine to talk about her texts with boys, the limitations of "hyperpop" and why there should be more representation for neurodiversity in the music industry.

"boys wanna txt" is your first release of 2021. Is this a reflection of where your music is going?

Not particularly. I think "boys wanna txt" was a spontaneous and fun song I had written during last year's lockdown. It felt like the right moment for me to branch out from my usual style and experiment. Releasing it in 2021 felt like a celebration of everyone being in better spirits this year with the vaccine and all.

What was the process like collaborating with Dylan Brady and ericdoa on that track?

It was super laidback. My friend Ryan made a group chat with Dylan, and we messaged back and forth until the song was in a good place. Then I hit up eric and bish bash bosh song done.

What's the last text you received from a boy?

"I JUST HANDED IN MY ASSIGNMENT" from my boyfriend.

Prior to "boys wanna txt," your 2020 drops are these heavy, midwest emo anthems. Where do you think that comes from?

Thank you for hyping them up, I love that description! I think my initial drive to make music came from the heavier scene and also internet core emo bands like Midwest Penpals, Camping in Alaska, early Foxing, Merchant Ships. Initially, I wanted to be in a band so bad until I figured out I could do it alone.

It was really inspiring to see that world blend into the emo-rap soundcloud scene in like 2016/17, seeing kids sample those bands and chuck 808s on it. Adam from Tigers Jaw becoming Wicca Phase Springs Eternal was notably motivating to me when I was younger because I saw that it was possible to honor emo influences while stepping into a newer sound and being a solo artist.

Do you think being grouped into the online "hyperpop" category is limiting or fitting?

I find the description "hyperpop" to be super confusing, vague and controversial. I notice that my peers in that scene shy away from using the term and culturally I think people hear the word hyperpop and think it's cringe. I think hyperpop arose because we didn't have a word to describe these kids online, but now I think it's a bit limiting because everybody seems to have a strong notion of what hyperpop means.

How have you spent the last year staying creative and what impact has isolation had on your music?

I think isolation forced me to rely on my internal resources a lot more for writing. I've had to figure out what I want my narrative to be and how I want to connect with others. I started my online festival Nocturne for this exact reason and it gave me a lot more motivation to be creative because there was a community around me.

Beyond Brady you've been working with a ton of incredible collaborators like Danny L Harle. What's that production process like?

Usually it's via email, just a lot of back and forth and recording in my bedroom. It sounds boring when I put it that way, but it's super exciting to me and every time I get sent a more refined demo I'm jumping around in my room getting hype.

Assuming you've been making tons of music we've yet to hear, what have you been writing about lately?

I find it really hard to write happy music, so I don't think the fun arrogance I executed with ["boys wanna txt"] is gonna be a reoccurring thing. So we're back to sad angry catharsis in my unreleased catalogue. Can't wait to unleash it.

The world is beginning to open up again. What are you most looking forward to experiencing again?

I can't wait to play my first show! I've never met any of my fans face to face, so I think it'll be a beautiful experience to finally perform in real life. Hopefully I go onto touring from there.

You recently wrote a very powerful note for Autism Acceptance Month. Why was it important for you to be so vulnerable with your audience about this?

I think neurodiversity is so common in the scene, but I hadn't seen anyone open up or talk about it. It's really important for autistic kids to have autistic role models that they can relate to, so while it's difficult for me to be open about my experience, I got hundreds of messages from other kids saying how much they appreciated it.

I don't want people to feel alone. Neurodiversity is awesome; if we don't talk about it, people will think it's taboo. We are swamped with horrible inaccurate autistic representation in media, so I wanna make sure there's at least one person people can look to and see real representation in the music industry.

Stream "boys wanna txt" by daine and ericdoa, below.