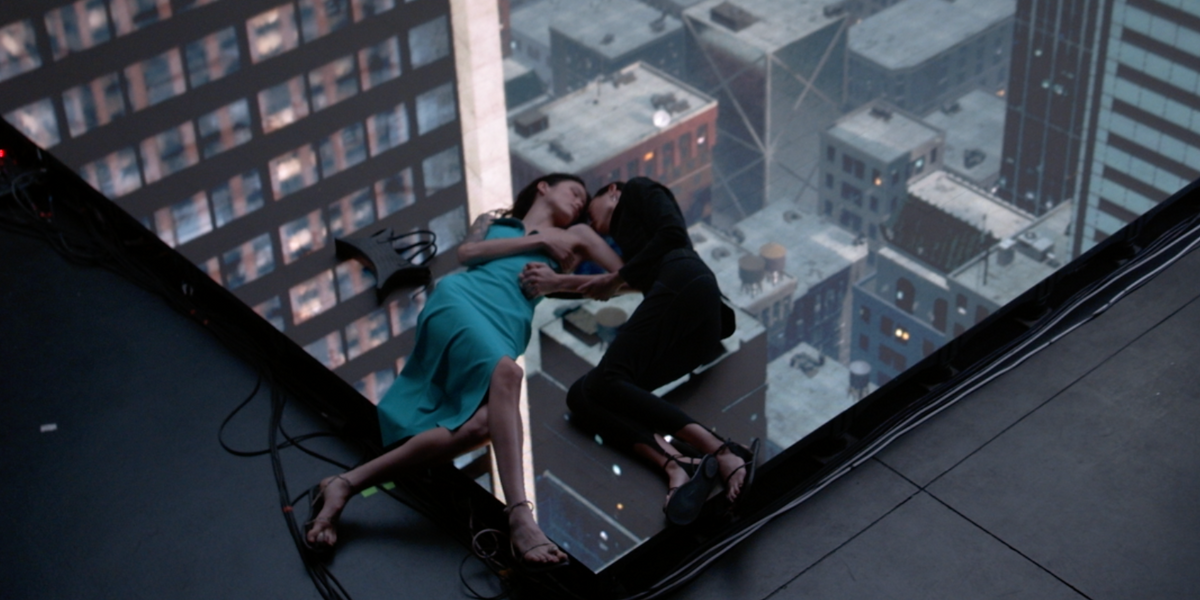 Coperni has long been one of the very few fashion labels in Paris to push the envelope when it comes to technology. From the way stage their mixed media shows to the technical materials incorporated in their collections, the brand continues to find new ways to tell stories through a variety of mediums.

Its Spring 2021 video campaign is perhaps the most tech-driven project yet for Sebastian Meyer and Arnaud Vaillant, the duo behind Coperni. Using extended reality (XR) technology that combines virtual (AR, VR and MR) and real-world elements (it's the same technology that was first used for Disney's Mandalorian series), the designers worked closely with gaming software companies to create an animated 3D world using special camera tracking.

In the vertigo-inducing video, models are seen balancing and lounging on metal beams suspended dangerously high above a giant unknown cityscape filled with skyscrapers. ("It has orange Blade Runner sun vibe," the designers told PAPER.) In fitting with the tech-heavy theme, the aerodynamic clothes they're wearing from Spring 2021's "Ready-to-Care" collection are made with anti-bacterial, UV ray protection and rain-resistant properties.

The collection was memorably shown 686 feet up high in Paris' Montparnasse Tower last September, making it the highest altitude fashion show ever done in the French capital. "We were really looking for this feeling of freedom, breathing, extension in a way," the designers said. "We've always been passionate about sci-fi movies and XR had us thinking about "Back to the Future" a lot. It really gives you the possibility to transport yourself. You can rebuild through animation and 3D so many incredible landscapes with a very realistic aspect."

The dizzying campaign was directed by We Are From LA, the same directors behind music videos for the likes of Pharrell Williams and Dua Lipa, in the first XR studio in Paris which is owned Julien Collect and Pierre Guy-Costanzo. So we started building the 3D animation of all skyscrapers in few different scenes, by night or during this hot summer day with an orange Blade Runner sun vibe.

As one of the first fashion brands to experiment with XR, which could potentially replace the use of green-screen in the next few years, Coperni plans to continue making tech the heart of everything they do. At the core of it all is their techno-chic DNA, which mixes innovation, progress, science and sci-fi with French heritage, tailoring and embroidery.

"This contrast between technology and chicness is everything we love," they said. "The tech side is why we called the brand Coperni. It's this Matrix/futuristic silhouette that we always work around. The chic side is about elegance, pattern and cut. We are based in Paris and always keep in mind this French touch while designing."