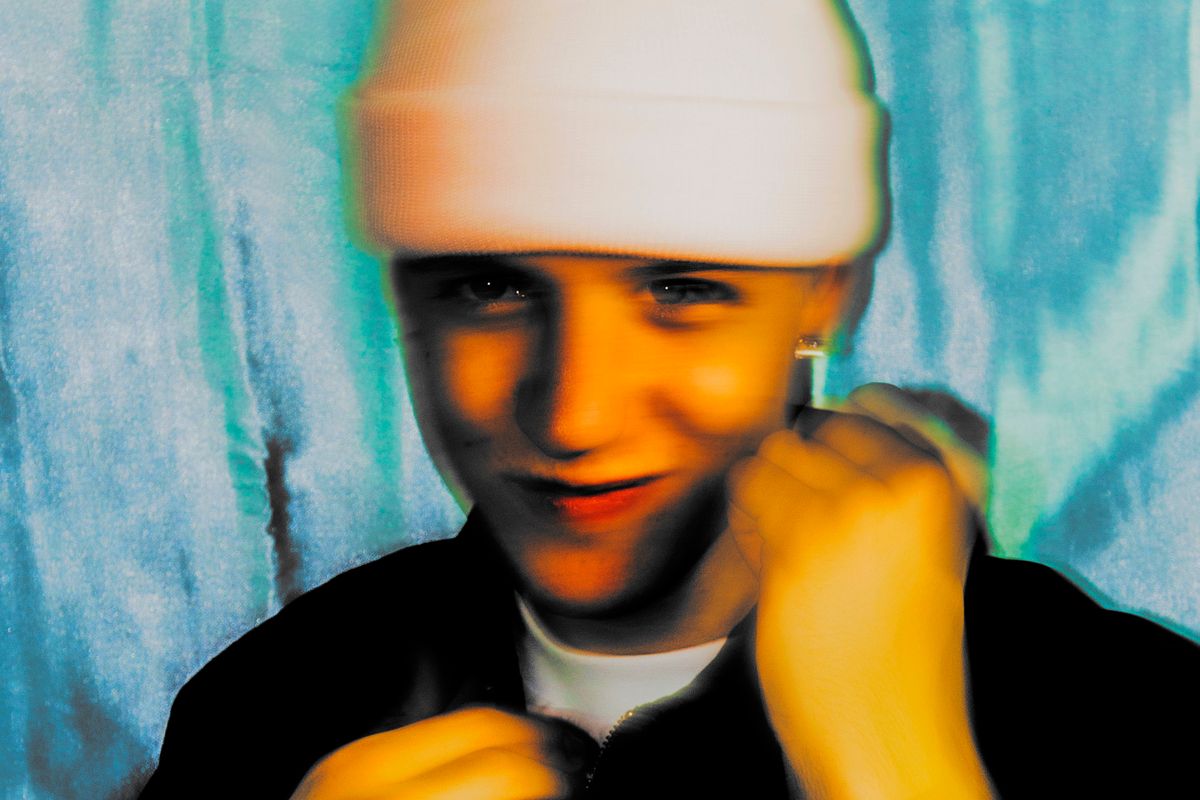 Long before the country went into lockdown, Chase Blohm was well-accustomed to working out of his bedroom; in fact, it's where he spent most of 2019. "I've been treating this shit like a sport for a minute," he says. "I've been training for a damn year." That inherently athletic mentality informs the Orange County charmer's forthcoming debut EP as contradash, ALL-STAR, an assemblage of potent emo-pop heavy hitters penned throughout last year.

Of the dozens of tracks written, only the nine brightest "all-stars" appear on the project, including "favorite color," which he's unleashing here today. It's a blithe stream of consciousness that amalgamates images of being left on read, or "red," and being buried in the ground. If in case that sounds somewhat morose, know that Blohm delivers the message with the breezy flippancy of someone who knows how to keep it moving.

Ahead of the release of ALL-STAR, due out soon via Interscope, PAPER caught up with Blohm on how to launch a career during a pandemic, his friendship with Dominic Fike and how his footing in graphic design led to making the songs that would change his life forever.

How did you settle on the name contradash?

I was finishing high school and I was doing a lot of graphic art. My alias at the time was pretty lame and I was listening to this song by Night Lovell called "Contraband" in the shower one day. If you Google the definition of "contra," it shows up with a hyphen because it's a prefix. So that became contradash. Nobody wants that name, so nobody has it.

So were you doing graphic art before you got into music?

Yeah, I was 17 when I started working for A$AP Ferg. He held this art contest and I won, and I got to meet him backstage and he ended up hiring me. I was around a lot of people who made music, but it wasn't until I met my friends from Florida — Dominic Fike, ALX, Matt Black, Nate Traveler — that my music propelled into what it is now.

I met them doing their cover art — they were initially just my friends from the internet. I went down to Florida in 2018 on a whim, and suddenly I had a place to stay and a studio to record in. They're all amazing musicians and they really looked out for me.

The fact that the visuals came before the music feels like an appropriate segue into talking about this new song, "favorite color." You've mentioned the name quite a bit on your Instagram in the past.

How did the song come together?

It started as a play on words. In this case, I thought of someone whose favorite color is red and leaving someone on read ("leave you on your favorite color"). It was one of the earlier songs I made that's more poppy. I can't even tell you what the hell I was thinking of when I wrote the song, but I like the outcome.

The song is one of the nine tracks off your new EP, ALL-STAR. What was making that project like, as a whole?

I don't even call it an EP, I feel like it's more of a mixtape. It's all of the songs that changed my life. Once I got back from Florida in late 2018, I spent all of the next year making these songs without releasing anything. I didn't want to put anything out until I felt like I was an all-star. I grew up playing sports and if you're a well-rounded enough player, there's always an all-star team. I remember feeling like a celebrity when I made the all-star team in fifth grade. Even though the status was imaginary, that was the fuel for this project.

How does it feel launching a career in 2020? Clearly there isn't anything to compare it to, because this is your singular experience, but I'm curious, how has it been?

I had released "blocked," my second song ever, on January 29. We were signed and set with Interscope by February 11. So, we had about three weeks of the real world with no COVID. From March to now, we've had everything else. We were supposed to meet people, meet radio hosts, go to Australia and New Zealand and do these interviews... but, obviously, that time was spent quarantining and recalibrating.

Honestly, as weird as it sounds, it's been a little bit of a blessing. I've had another year to stack up more songs like I did last year. We're putting out the older stuff now, but it's been another year of stacking up. I'm used to it. I'm at home the same amount, I'm not spending money or anything. I literally just do the same thing I'd be doing last year. Top of 2021, we'll have all this other shit I've been making all 2020.

It's pretty sick that you get that continuity — you could have been on tour all year.

Maybe I would have more fans right now, but I wouldn't have the music. It's a blessing to not tackle the real life aspect of this yet. I'm just a kid who sits on his computer. I don't have to do the press, or the opening set, or the festival, or get booed off stage or anything like that yet. So, I'm grateful. This is just beyond extra credit. I couldn't be in a bad mood if I tried.