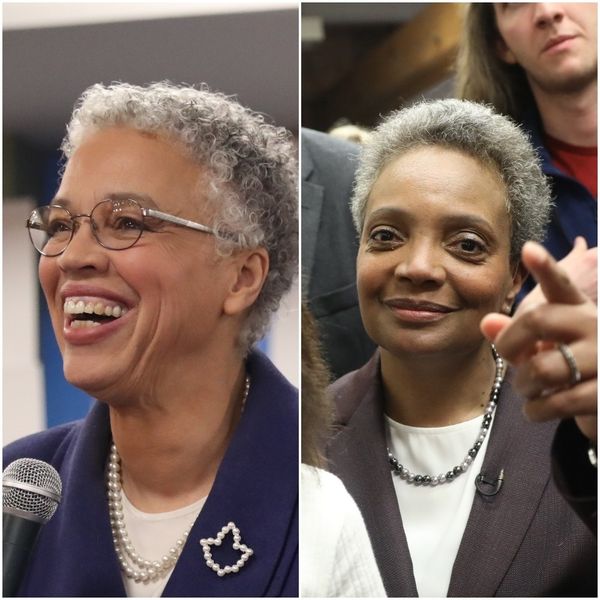 Chicago's Incoming Mayor Will Be a Black Woman

The final vote determining the next mayor of Chicago will be revealed after an April runoff, following the concession on candidate Bill Daley to two Black women. The women vying for mayor are Cook Count board president Toni Preckwinkle and former federal prosecutor Lori Lightfoot. What's most remarkable is regardless of who wins, they are making history: Chicago is the nation's third-largest city, and only now will a Black woman run it for the first time.

While Preckwinkle and Lightfoot are tied for the top two slots, Daley, the son and brother of two past Chicago mayors, and a chief of staff to former President Barack Obama, finished third in a field of 14 candidates. That's another historic moment: the field of candidates lined up to replace retired Chicago Mayor Rahm Emanuel ultimately became the most-crowded mayoral ballot in the city's history, assuring that no one would secure the 50 percent needed to avoid a runoff.

"This, my friends, is what change looks like," Lightfoot told supporters on Tuesday night. Preckwinkle noted that though change was in the air, "our fight is far from over." The election results also reflect the city's continuing shift to the left, which isn't surprising considering the city's history of Democratic rule. Daley, whose father and brother ran Chicago for 43 years combined, represented old-guard establishment politics in the minds of voters, and as the Democratic party shifts left nationally, winds of change and renewal are inevitable.

Considering the independent anti-corruption and police-reform platform of Lightfoot, who once served as president of the Chicago Police Board and the city's Police Accountability Task Force, and Preckwinkle's experience as city planner for economic development and her support from organized labor unions, the change both candidates are advocating for is needed now more than ever. Since announcing her candidacy last May, Lightfoot was critical of reform efforts following the 2014 fatal shooting of Black teenager, Laquan McDonald. That case brought national attention and calls for Emanuel's resignation. Additionally, Lightfoot is openly gay, and suggested in her election-night speech that this would be another major first for the Chicago mayoral office.

That said, whoever wins the vote on April 2 will inherit control of a city plagued by deep and ongoing social and financial issues, including a high murder and crime rate, population decline, and large pension cuts. Regarding finances, the city's four pensions are reportedly underfunded by $28 billion. Unfortunately, Emanuel's efforts to financially boost retirement system by raising property and utility taxes and increasing the city's contributions has only funded the pensions by 27 percent. Chicago reportedly must come up with at least $1 billion by 2023 to cover mandatory payments.

But as we know from Democratic poll results and those elected to office, if anyone is equipped to take problems like these on with citizens' best interests at heart, it's Black women.