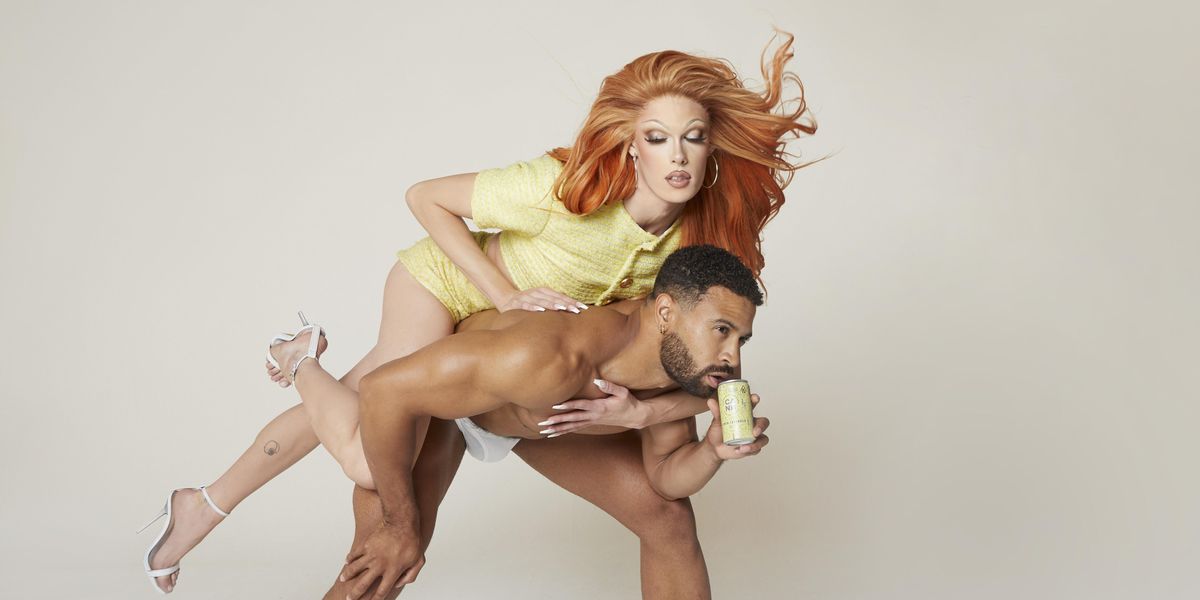 "When queer artists are visible and celebrated for their uniqueness and brilliance, it counteracts the 'othering' we often experience as LGBTQ+ people," says Luke Anderson, co-founder of CANN, a cannabis-infused social tonic, which kicked off Pride month with a new campaign fronted by RuPaul's Drag Race current reigning supreme, Symone, as well as Gigi Goode, Rosy Thorn and Song of Summer contender Vincint (if you haven't listened to "Higher," get up to speed now). In an industry dominated by and too often centering cis-hetero men, CANN is positioning itself toward a wider, and more inclusive market.

According to Anderson, who co-founded CANN with his business partner Jake Bullock as a queer-owned brand, they have what he describes as a duty to be inclusive in their marketing in an effort to help legitimize the LGBTQ+ community within the cannabis industry.

"Beverage brands are still using predominantly heteronormative marketing toolkits, so we also try to be a bit subversive with the details here," he says. "If the Fanta Girls were drag queens when I was growing up, I might have felt safer to explore sexuality and gender identity without as much fear or self-destruction."

I'll drink to that. Now what exactly is a cannabis-infused social tonic? Each CANN is made from five ingredients: fresh juice, herbs, agave nectar, cannabis extract and water. The fresh juice is no BS either, with sourced ingredients like Sicilian lemons, Fijian ginger and Massachusetts cranberries. "We tinker with each formulation until it's perfect," says Anderson. "Sometimes my co-founder Jake and I argue over whether it should be six or seven drops of something for days before settling on the final answer."

Bullock grew up in Colorado and witnessed the legalization of cannabis happen from his front yard, studying the evolution of the industry closely as it played out in real time. Anderson, meanwhile, had little exposure to cannabis, swearing it off entirely after a "bad pot brownie experience in college." Duke and investment banking were in Bullock's trajectory; Stanford and math teaching in Anderson's. Then fate happened, when in October 2012, they both accepted jobs at Bain & Company as management consultants. "Both of us were at the time closeted queers who picked up an intense alcohol habit as a means of coping with our sexual identity crises... you know the type."

Related | Why Do Weed Products Look So Luxe Now?

That part is important, Anderson says, because after a typical weekend spent heavily drinking, they would often argue about the destructive nature of alcohol and how dependent they were on it for a social lubricant. "Jake would say things like 'microdose cannabis beverage is the future,' pointing out how thousands of years of human history have been spent socializing around beverages with micro-doses of active ingredients like alcohol or caffeine." Anderson shrugged off his friend's bizarre musings as the "dumbest idea ever."

Years later, in his 30s, Anderson experienced his first two-day hangover, which led him to reach out to Bullock about that very dumbest idea ever. "Okay wait, do cannabis beverages give you a hangover? Because if not, then I'm in." As it turned out, again fate, Bullock had been incubating the concept with a few folks at business school under a different brand name. Although it had gone well, the group did not want to risk leaving behind comfy jobs on an "unproven segment of a nascent industry riddled with stigma." Anderson was convinced that together they could fully form what would become CANN. So they did what any 30-something start-up founders do: Moved in together in Venice, start-up garage style, under the shared vision of bringing people an alcohol alternative that would "allow them to hate themselves less."

Next came funding. They shot for the stars on this… literally, reeling in Gwyneth Paltrow, Darren Criss, Tove Lo, Ruby Rose and Rebel Wilson among their backers. According to Anderson, it was all organic. "At some point famous people started following the brand, and I would drive around Los Angeles like a crazy person dropping off gifts for them and trying to be friendly." But what about Goop?. "She was actually my babysitter in New York when I was two," he says, his eyes twinkling with gay glee. "It was her first job at age 16. When one of my investors introduced me to her at Goop, I ambushed her with that fun fact, she was floored, and we had a good laugh."

Though intrigued, she declined their initial offer in 2019 citing an unstable business model. "I stayed in touch with her and when things took off in 2020, I pitched her a second time and she said yes because we had a zero sugar version and hot water additives, which she liked. Once Ruby Rose and Gwyneth went public about it, the rest of the famous people who had been drinking it and loving it jumped into the fray as well."

Related | Nats Getty on Becoming His Authentic Self

With their 2021 Pride campaign, CANN is making a statement not only with their product, but to the kind of consumer they are hoping to garner. Spearheading the campaign is stylist and concept artist Marko Monroe, who helped architect some of Lizzo's most iconic red carpet moments: Custom Christopher John Rogers at the GLAAD Awards, custom BCALLA at Coachella, custom Marc Jacobs at the Met Gala and custom Valentino at the American Music Awards, just to name a few.

"Marko is an incredible visionary," says Lizzo. "He is so special and I'm glad that he's getting the recognition that he's worked so hard for. It's been wonderful growing with him and inspiring each other. I am as inspired by him as he is inspired by me. There's more looks and iconic moments to come. He is an icon in the making."

Monroe says he was most excited by the creative runway granted to him with a campaign like this and for the opportunity to really parse out what he and his creative partner, Grant Vanderbilt thought was missing in most Pride campaigns. The answer: individuality and personalization.

"We all see how larger companies have adopted the symbolism of Pride with the rainbow flag," he says. "That's great, but we wanted to approach Pride differently and really look at what that means. Pride in one's self, in who you are, and in celebrating your individuality. Then as we turned to look at the product that we had grown to know so well, we saw that not only does each CANN flavor have a distinct presence, it also has a tiny description of who the flavor would be personality wise. This opened the door for us to create a pride campaign that felt unique to the brand itself."

Enter: Symone, Gigi and Rosy in an campaign inspired by both the Fanta Girls and the iconic Richard Avedon-lensed Versace ad from 1994 that featured supermodels Nadja Auermann, Cindy Crawford, Claudia Schiffer, Stephanie Seymour, Christy Turlington and Bridget Hall. The result: something campy and quirky and colorful.

"Life is short and now that huge companies are capitalizing on Pride, it's really easy to feel disconnected from those producing Pride merchandise or products to the actual meaning of our celebration," Monroe says. "No shade, we love to see it. But, it does hit a little different when you know your peers are the ones bringing attention to a product that truly is prideful in their individuality and flavor. CANN isn't like any other cannabis drink, it really does stand out. So the pairing only feels natural. It's like finding your tribe. And damn, is it a good one."

According to Anderson, choosing to work with rising stars in the queer community (who he describes as "creative geniuses in their own right") makes this campaign all the much more special. It's also something he doesn't see as a one-off, but rather embedded into the DNA of the brand. With queer-owned brands like CANN and Sonder asserting their industry dominance, it signals to the industry the power of LGBTQ+ entrepreneurs and consumers.

I end my chat with Anderson asking about his penchant for bleaching his hair, as evidenced on Instagram. His response makes it clear that I'm in the presence of my people: "They say that when queer dudes bleach their hair it's a sign they should be in more intensive therapy, and it's true. I bleach it whenever I'm on the verge of a mental breakdown, which is roughly every other month." Happy Pride!

Photography by Max Bronner courtesy of CANN/House of Avalon