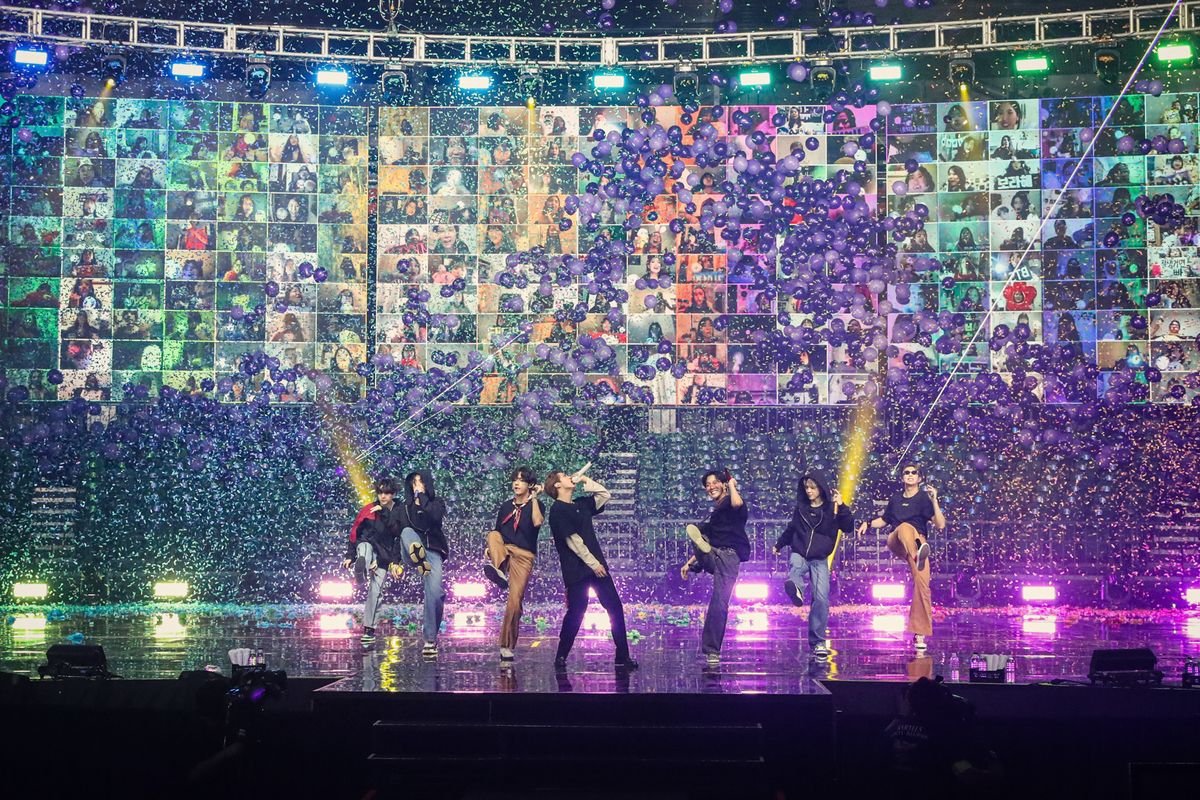 BTS 'Map of the Soul ON: E' Had Almost a Million Viewers

During their last virtual live show, "Bang Bang Con: The Live," BTS broke a major record. With around 756,000 concurrent viewers in 107 different countries and territories, they had an audience large enough to fill about 15 stadiums that can seat 50,000 people, which was equal to an estimated $19.7 million in ticket sales. Knowing that their online concert was such a big hit, BTS made sure to pull out all the stops for ARMY for 'Map of the Soul ON:E.'

Because of COVID-19, the band's tour for their latest album, Map of the Soul: 7 was canceled and the boys haven't been able to see their fans. And so the emphasis for this show was to show their love and appreciation for the ARMY, and even integrate them into the concert in real time. Beyond just the live chatroom that the band members are able to read, the fans' faces were also shown during their sets, and so were their BTS bomb light sticks — with the help of streaming platform KISWE.

"Our motivation is for the ARMY to be able to cheer, cry, sing, laugh, and dance, and in ways that are appropriate for a global audience, bring those emotions to the band in a way that is meaningful for the band, and for the ARMY," KISWE CEO Mike Schabel told PAPER in a statement. "We really want the at-home audience to stand up and be heard, and to make sure that BTS hears them, at least figuratively if not literally."

The massive two-day event had 993,000 viewers across 191 different countries and regions.

This concert showed the range of the band. They performed everything from their major pop bops like "Boy With Luv" and "Dynamite," to their classic hits that OG fans would appreciate like "No More Dream" and "Run." Each of the members also had noteworthy solo moments, with RM, Suga and J-Hope spitting verses from each of their own rap songs, and Jin, Jimin, Jung Kook and V singing their singles off of MOTS: 7.

Set design and production also played a major part in "ON:E." According to a press release, the show's production cost was eight times larger than that of "Bang Bang Con." There were four different stages, a carousel appeared at one point, some cool laser lights created the appearance of a boxing ring, screens were everywhere to give a 360-degree immersive illusion of traveling to multiple venues. It was definitely a trip, to say the least.

Everything ended on a tender note. To close out the first day, after their encore, BTS also delivered individual messages to their fans around the world. And one of the memorable moments that stuck was when member Jimin broke down in tears, as he spoke about his frustration with the pandemic and being unable to perform in-person. His bandmates and ARMY, of course, cheered him on and comforted him after.

But at the end of the day, BTS emphasized that they remain strong, with the ARMY by their side, even though that means doing everything virtually for now.