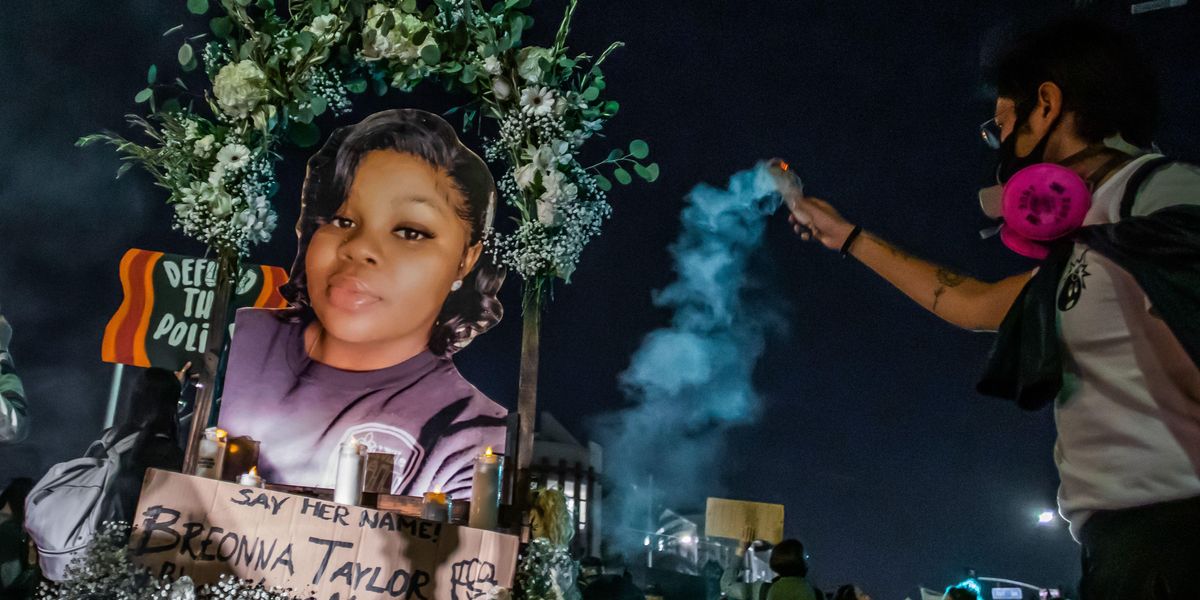 Simon & Schuster has scrapped plans to distribute a book by one of the Louisville officers involved in the killing of Breonna Taylor.

On Thursday, the Louisville Courier-Journal reported that officer Jonathan Mattingly was given a book deal by right-wing publishers Post Hill Press, whose titles are distributed by Simon & Schuster. According to the publication, the book is called The Fight for the Truth: The Inside Story Behind the Breonna Taylor Tragedy and will likely see Mattingly continue to claim that her death was "not a race thing."

Needless to say though, the news was met with swift backlash from Twitter users who labeled the move hypocritical and "disgusting," calling the company of "enablers" of ongoing racism and police violence against Black people.

This is truly one of the most disgusting things I’ve ever seen. Shame on you, @simonschuster, for enabling this monstrosity. https://t.co/WRdVYVTK34

In response to the backlash, Simon & Schuster announced in a Twitter statement that they had cancelled plans to distribute Mattingly's book, claiming that "like much of the American public," they learned about the book deal on Thursday.

The company wrote, "We have subsequently decided not to be involved in the distribution of this book."

However, many called bullshit, including author R. Eric Thomas, who wrote that Simon & Schuster could "absolutely fuck off with this 'we found out when you did.'"

"You're a corporation in a professional relationship with a troll publisher," Thomas added. "You didn't find this information out on Twitter."

I’m glad Simon & Schuster is distancing from the disgusting Mattingly book but absolutely fuck off with this “we found out when you did”. You’re a corporation in a professional relationship with a troll publisher. You didn’t find this information out on Twitter.

Meanwhile, others zeroed in on Simon & Schuster's larger partnership with Post Hill and wondered if the same thing would happen for forthcoming titles from Senator Josh Hawley and former Vice President Mike Pence.

1. Is @simonschuster still distributing Josh Hawley’s book? And if so, what’s the difference in the decision making? 2. Setting aside third-party distribution, what about the 2-book deal with Mike Pence? https://t.co/O5AbBlSxfo

And some called for the company to axe the distribution deal entirely.

Mattingly was one of the three plainsclothes officers who opened fire in Taylor's apartment on March 13, 2020. Alongside former officers Brett Hankison and Miles Cosgrove — who fired the shot that killed the sleeping 26-year-old EMT — Mattingly executed a no-knock warrant for a drug investigation in connection to her boyfriend, Kenneth Walker.

Walker, who is a licensed gun owner, also allegedly shot Mattingly in the leg during the raid. Mattingly reportedly filed a countersuit after the charges against Walker for the attempted murder of a police officer were dropped.