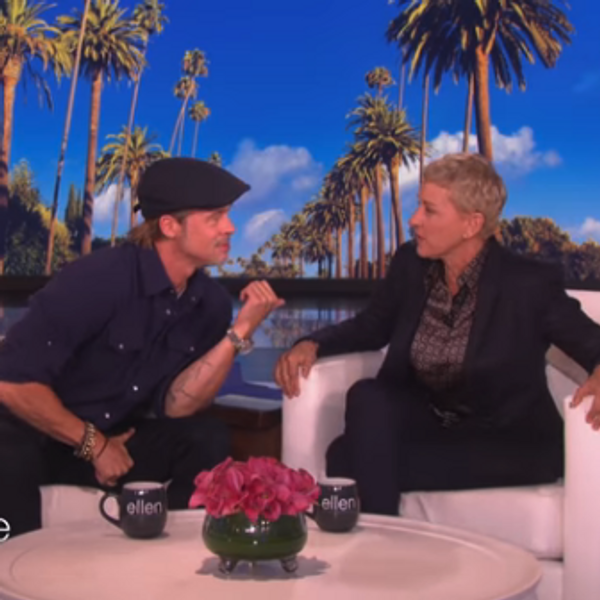 Combined, 55-year-old Brad Pitt and 61-year-old Ellen Degeneres have a lot of ex-girlfriends. Turns out, there's been some overlap.

While on Ellen to promote Once Upon a Time in Hollywood and his new space dad movie Ad Astra, a newsboy-capped Brad lovingly recalled the day he and Ellen met. It apparently included Ellen hitting on Pitt's then-girlfriend at a late '80s pool party thrown by iconic lesbian singer-songwriter, Melissa Etheridge. I mean, who could blame Ellen? It was on Etheridge's turf, after all.

Brad and Ellen have similar taste in women. "I actually since then, have dated another one of your girlfriends," Ellen said, her eyes glinting. To which Brad Pitt, sounding extremely unsurprised, replied, "We'll talk about that after the show."

Okay, let's discuss. Ellen Degeneres began dating her wife Portia Di Rossi in 2004, while Brad Pitt was married to Jennifer Aniston from 2001 to 2005.

Before Portia, Ellen dated producer Teresa Boyd, actress Anne Heche and photographer Alexandra Hedison. However, we'd would likely know if Brad had links to any of those women — plus, the woman in question was referred to using the title "Brad Pitt's Ex-Girlfriend," which is a very specific and storied title.

Who do we want it to be? The prospect of Thandie Newton or Juliette Lewis flitting around Hollywood with a feathery-haired Ellen in the '80s rocks my world. Ellen x Gwyneth would also be a treat. However, Thandie has no connection to Ellen and Juliette is a member of the allegedly homophobic Church of Scientology. Based on the calculations of the investigators over at Jezebel, the most likely contender is Christina Applegate, who's appeared on Ellen over the years. Well, we know Ellen loves a bombshell.

Please, for the love of God and gossip, if have any information about Brad and Ellen's shared ex-lover, please don't hesitate to hit up the grapevine: edit@paperentertainment.com.