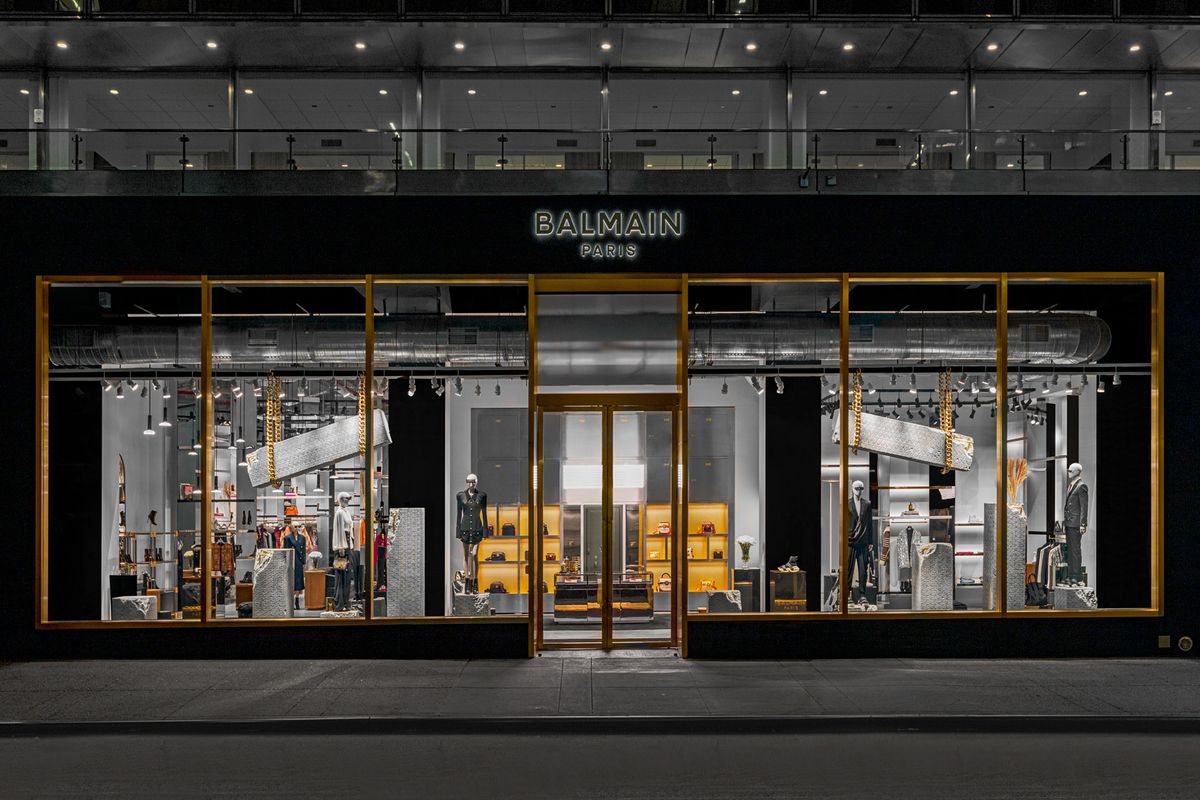 Calling all Balmain Army troops — you may know An American in Paris, but what about bringing Paris to America? As the fashion set waits for his Spring 2021 show tomorrow, Olivier Rousteing is bringing his signature French flair to Madison Avenue with Balmain's newest boutique, which officially opened today.

Since taking over Balmain in 2011, Rousteing has transformed the French fashion house with his modern takes on classic couture, celebrity fans (he counts Kim Kardashian-West, Cara Delevingne, and Kylie Jenner as followers) and social media savvy. It's no surprise then that his retail plans would be similarly flashy and decadent. In homage to Pierre Balmain's legacy, the brand's new store will be situated just a few blocks away from the 1970 site of its first NYC boutique.

"I love New York and I'm fascinated by the city's one-of-a-kind style and flair," Rousteing said in a statement. "And that's why I knew that we couldn't simply cut-and-paste a Parisian décor into the Manhattan's modern environment."

Contrasting to Pierre's first American outpost, Rousteing's boutique has been constructed to be "as eye-catching as a New York gallery." An all-black "porch" will display the brand's newest campaigns, collaborations and collections, as well as pieces by Rousteing's favorite artists. Behind it, shoppers and fans alike can experience 3,500-square-feet of open rooms, each dedicated to a specific department like shoes or handbags.

Speaking of handbags, Rousteing has created two limited-edition versions of his BBuzz bag — inspired by vintage airmail envelopes and fully reminiscent of Pierre's time — that will be exclusive to the store.

While working with the team behind architecture agency Studio AMV, Rousteing modernized or replaced accents, like chandeliers and ornaments, that are hallmarks of traditional Parisian boutiques. This concept, first used in Balmain's Via Montenapoleone store in Milan three years ago, is meant to reflect cultural unions — in this case, New York and Paris.

"Olivier's original aim was to transport Paris to all corners of the globe, inspired by the codes of a classic hôtel particulier to help to make each Balmain visitor feel the atmosphere of Paris, wherever they may be in the world," said Studio AMV's Anna Philippou in a statement.

To top it off, a new collaboration with luxury candle brand Cire Trudon will be unveiled for the boutique's opening. Based on Rousteing's longtime love of Trudon's 'Ernesto' candle, he's made a black-and-gold striped Balmain version with Maison Robertet 'nose' Emilie Bouge. As Rousteing would put it: "THIS IS MY REALITY!" And we're all just shopping in it.

The Balmain store is open now at 650 Madison Avenue.