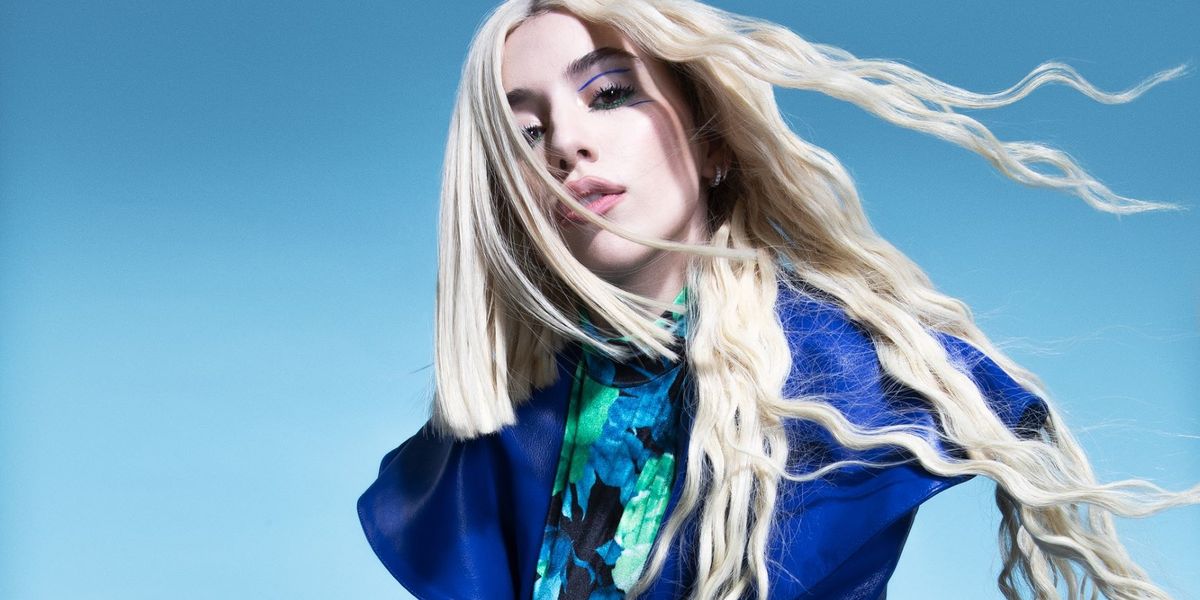 Who is Ava Max? If you don't know her name, you've heard her inescapable electro-pop smash "Sweet But Psycho," a time machine back to summer '08 bubblegum Eurodance a la Cascada. It's the one with that chorus: "Oh, she's sweet but a psycho/ A little bit psycho/ At night she's screamin' 'I'm-ma-ma-ma out my mind.'" You've heard it, I promise.

The woman behind those "ma-ma-ma"s is a 26-year-old Albanian-American pop singer currently handcrafting her own Top 40-ready cult of personality, replete with a signature haircut, red carpet stunts and a deliberately nostalgic sound designed with super-producer Cirkut. "I feel like pop music is a way of going back to like your childhood," she tells PAPER. You can hear the imprint of all the pop queens Max was raised on in her music, most notably Lady Gaga, who she doesn't discuss anymore after comparisons turned nasty. There's a little Britney, a little Katy, some Ari and a pinch of Sia as a treat.

Max's new single, the first from her debut album, "Kings & Queens," continues to define her colorful sound, and overt feminist message. Dedicated to all the unappreciated "queens" of the world — it's for the girls and the gays, she assures — it's an irreverent, pulsing party anthem sliced through by a hair metal guitar line.

"You might think I'm weak without a sword/ But if I had one it'd be bigger than yours," she cracks, going in for the dick-grab in the maximalist, royalty-themed new video, which PAPER premieres today. Max cosplays as the queen of a troupe of Amazonian warriors, serving plenty of choreo and latex. The video sees Max fleshing out her visual world even more, most notably with the addition of birds as her mascot.

"We put together a list of ideas and references, royalty, heaven, spaceships, birds, chess boards — and a moodboard of styling references that felt powerful and feminine," says director Isaac Rentz. "Ava is one of my favorite artists to work with because she's endlessly enthusiastic about the video process every step of the way. She'll text me at 2 AM with 100 ideas and references of the exact kind of birds she wants to hold during the verse. It's a true collaboration, where my job is about bringing her vision to life and making sure it feels authentic and personal."

PAPER called up Ava in quarantine to find out how she's coping, why she's obsessed with birds and to get a behind-the-scenes look at "Kings and Queens."

How's it going in quarantine? How are you coping?

Man, it's definitely a new kind of way of living since I'm used to traveling so much. In the beginning, it was nice to sit around and watch movies but now I'm kind of going crazy. But I think it's nice for everyone to connect with their families as much as we can, right?

How are you staying busy? Are you working on anything new?

Yeah! So, my first album is done but I have started writing new songs. I've definitely written a few songs in the past week. What else am I going to do? I can't watch literally every single movie on Netflix.

Any weird hobbies you've gotten back to?

You know, I'm trying not to Postmates too much so I've been cooking like crazy… it's making me realize how many dishes I have to clean up after.

How has the pandemic changed your life professionally?

To be honest, I feel weird talking about or sharing my music because I feel like it doesn't mean anything with everything going on. In my heart, I feel kind of guilty, in a sense because people are dying. People are getting this horrible disease, and it's just really hard for me to talk about my music. But I'm getting messages from my fans telling me it's helping them. It's uplifting them and I have to think about it that way. Because if I'm in my head, I'm thinking no one cares and we should focus on more important things.

Tell me about "Kings and Queens." What does this song mean to you and how it came about?

"Kings and Queens" is an anthem for all queens — girls, gays — ready to take over the world because in my opinion we would have a better world if queens took over. It's just a fun song but also just really empowering. I feel like when we were making it, we really wanted to prove that queens are better in every way.

How did you settle on the royalty, or "kingmakers" theme? Feels very Game of Thrones.

Yes! I've always loved theatrical themes and playing dress up. And in the last year, it's funny, friends have told me "Oh my god, you remind me of Khaleesi." They kept saying that, so I thought, "Oh my god, why don't I just have a theme similar to Game of Thrones?

What was your vision for the video? Clearly you went big, fun, colorful, lots of drama.

I wanted to write a treatment with the director that felt very theatrical and fun. I wanted it to feel like we were celebrating. We didn't care. We were there to have fun. I also wanted to have birds in the video, because I actually grew up with birds and it's kind of like a symbolic thing for me.

Yes! Actually I have a funny story, everytime my family and I would go on vacation my grandma would take care of our birds. But sometimes I would come back and there would be one less bird. She would just be like,"Oh, it just flew away", but in reality my grandma just never liked the birds and would leave the door of their cage open. When I was younger, I believed her! I was like, "Okay, they just flew away."

Your grandma is stone cold.

You seem preoccupied with this theme of dangerous, powerful, or even violent women in your music, from "Sweet But Psycho" up to this. Where do you think it comes from?

Since I was a little kid, my parents have said that, that "I'm sweet but psycho." Like, "You're sweet, but you're a little psycho." I'm like, "Why do I have to be called psycho for being strong?" When my parents, or ex boyfriends would say that, I would be really hurt by that. So I thought, "You know what? If being a psycho means being strong, then that's fine. I'll be a psycho then." I've always been an open book. It's really hard for me to tell a lie. I can't tell a lie. That gets me in trouble, that got me put into the psycho box. I think shedding light on that and saying women speaking their minds is okay and a good thing is important. For me, doing that after so many men have put me down is important because I know there's a lot of women who feel the same.

Why would your parents call you a psycho?

It was little things, like they'd tell me a white lie like parents tell their kids and I would be like, "No, that's not true!" I would just call them out. I was just very open from the get-go. I was never that kid to just not talk. My brother, on the other hand, was quiet, but I was just very open.

Let's talk about the album. What was on your mind when you were writing this album? What people can expect?

It's a very pop album. There are no ballads and no features. You're going to see two sides of me and who I am. You can hear what inspired me when you hear the album. For me, I think it's important to show my voice, so there are some songs that you can hear more pop, and then there are some R&B runs. There's definitely a lot of different influences in it.

What are some of those influences?

Mariah Carey is number one. I just grew up with her in my room listening to her CDs nonstop on a loop. My dad and my mom would go crazy. And Britney Spears, Christina Aguilera.

There's been such a cool revival lately of artists going back to those old-school pop sounds.

Yeah, I feel pop music is a way of going back to like your childhood, in my head. When I make pop music, I feel like a kid again.