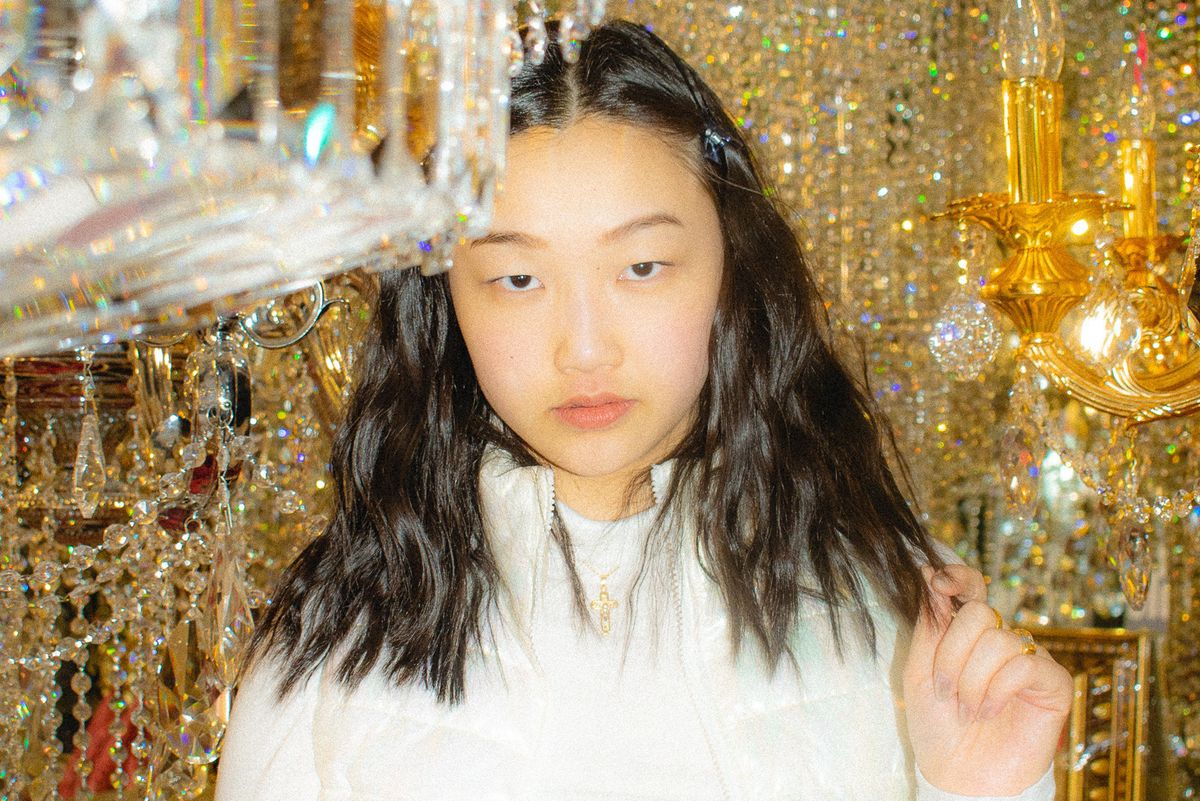 One of the first things I learn about Audrey Chu is that she's "a 19-year-old Korean-American who likes her cereal soggy." She also clarifies the spelling of her last name, joking: "It should be 'c-h-e-w', because that's literally all I do." She's immediately charming, but she is also a notable pop singer/songwriter, who goes by the mononym Audrey. Her music effortlessly marries trap's blunted edges with divafied pyrotechnics.

Born and raised in New Jersey, Audrey is no stranger to being the odd one out. Growing up, she would bring traditional Korean lunches to school, fielding invasive questions from people who didn't look like her or understand her culture. Then, realizing she wanted to perform from a young age, Audrey understood that her mission was to be the exception and the rule. A young Asian woman storming the pop world is rare enough — so unfortunately rare in fact that Audrey aspires to push through to the masses. She hopes someday that other Asian singers will see her on big stages and know what is possible.

"Coming as an outsider, and not seeing someone who looks like me doing this, really motivates me to just make work that lives outside those bounds of race and gender," she says.

Audrey is currently on a gap year from New York University's prestigious Clive Davis Music Institute. For the past year or so, she has doubled down on making her dreams reality. With no prior connections to the industry, she quietly wrote songs in her early teens until eventually teaming up with producer/manager Anwar Sawyer. The two have been crafting her shapeshifting, singular sound for the past few years.

Her songs alternate between menacingly claustrophobic ("Honeypot") and spiritually spacious ("I Try"). She takes musical cues from the greats, like Kanye West and Whitney Houston, while also being in a similarly self-made class of contemporary Internet-pop upstarts like Slayyyter and as we discover, she is committed to excellence.

Today, PAPER premieres Audrey's action-packed video for her latest single, "Soufflé," a song written about her first time living away from home. In its whirlwind two minutes, it captures the conflict of being on your own when indebted to family and roots, and all the self-doubt that follows. Despite that self-doubt, the song is confidently rendered, accented by booming hip-hop beats. In the video, directed by Maurice Zarzuela and edited by Andrew G, Audrey adopts the irony of hip-hop posturing throughout locations in downtown Manhattan's Chinatown neighborhood.

Learn more about Audrey and watch "Soufflé," below.

How did you get started making music?

I've been singing for my whole life. In terms of writing, it's only been a year and a half, maybe. This is all fairly new to me, and it's been amazing so far. I started off singing in school and I knew this is what I wanted to do, but honestly I had no clue how to break in. I didn't know anyone in the industry and my parents knew nothing about it. I did the only thing I knew how to do, which was record videos of me singing and put them up on Instagram. One day Anwar [Sawyer] messaged me on Instagram. I was 16 years old at the time and he was like, "We need to link." So we met up, I brought along my mom and my brother, and ever since then we've just been building a catalog of songs. Somewhere down the line I signed to his management company.

Your music is this crazy mix of pop and trap sounds. Who inspires you?

Mix is definitely the right word; there's a weird mix going on. I love artists like Whitney Houston, Sade, and diva vocalists I grew up listening to just because I love to sing. But I also love Thundercat, the production of Kanye, and weird trap, hip-hop-type of shit. It's all mixed, which I think makes me tick. My music speaks to being a Korean-American, walking this fine line between worlds, which I've grown up doing and learning to master. I'm influenced so much by my childhood as well — having straight from Korean cousins who watch Korean shows and play Korean games, but then going to school, where no one knows about those things. I feel like that collision of worlds really manifests in the sounds, which is cool.

How does your background influence your work?

Something that's so exciting for me, but also kind of tragic, is that there is not a face like mine that has broken into the mainstream yet. Coming as an outsider, and not seeing someone who looks like me doing this, really motivates me to make work that lives outside those bounds of race and gender. Yes, I'm Korean-American and I'm a woman and that is going to leak into everything I do because that's just the natural process of making things. At the same time I do want it to be about the work and excellence. I feel like my biggest duty is honesty because I don't have to worry about my identity leaking into or being such a loud part of what I do. I feel like it will be no matter how hard I tried for it not to be. I'm not saying that's what I'm doing, but if I wanted to conceal anything that shit wouldn't work.

"I'm Korean-American and I'm a woman and that is going to leak into everything that I do... At the same time I do want it to be about the work and excellence."

The "Souffle" video plays with materialist tropes of hip-hop culture and flips them on their head, like your version of a twisted American Dream.

The song was born out of a time where I had just moved out of my mom's house and I was living by myself for the first time. It was a pretty tough time and a tough transition because I'm a family girl. All of a sudden I was faced with all this silence and I had time to really question if I made the right choice in taking a gap year. Did I know what I was doing? No. The lyrics "so washed up" were just swimming in my head for a good amount of time, and when I went to Anwar's house I wrote the song in under an hour. For the video, I really wanted to get that feeling across but also take it further and highlight the irony of that situation — the fact that I'm here and I do it because I love it, but at the same time it's the most vulnerable thing for me. While it's a vulnerable process, I find empowerment and freedom in it. Sometimes I feel jaded, like the lyrics express. I wanted to create those images like me and my best friends wearing all white and jewelry, kind of futuristic-looking, but standing in a ratchet Chinese restaurant. Also me balling out on a Mercedes-Benz, but it's actually a plastic toy car. I really wanted to highlight those ironies.

What do you think it takes to normalize Asian-American representation in pop culture?

If we're talking long term, mainstream exposure is definitely part of my vision. I think there are so many Asian-American artists who are succeeding, subculture wise, and there are a lot of pockets and sub-communities that are really doing it. I just think it hasn't really been normalized yet in mainstream culture, and there's a part of me that really wants to see that, even if it's not me. I just want to be involved in some way.

If someone sees you doing your thing, they believe they can shine, too.

It feels like an amazing privilege and opportunity to be able to have that kind of platform. I think the time to shine is now; it's been bubbling at the surface for so many years, but I think people are ready for it.

Right now, I'm just writing a bunch. I definitely want to put out a project this year, hopefully an album. I want to put out videos for it and keep doing this. Right now it's independent and I have no complaints. I'm just really overwhelmed and grateful; it's been almost a year since I put out my first song. I feel like I'm a different person than I was then and I'm really excited.