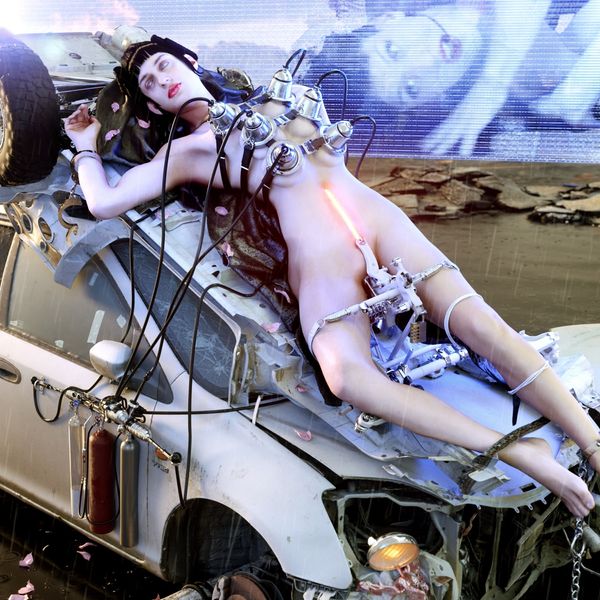 About three years have passed since we heard new music from experimental producer/ artist Arca, but that doesn't mean she hasn't been busy. In the time since the release of her self-titled album, Arca has mounted a series of ambitious live shows, collaborated with an AI on a score for the MoMA lobby, worked with and hosted a club night for Frank Ocean and just this week even soundtracked Burberry's Fall 2020 runway show.

Given how prolific Arca's creative output is it maybe shouldn't come as a surprise that her return would come in the form of a 62-minute long single. Premiered on NTS Radio earlier today, "@@@@@" is — on the one hand — a nod to the GHE20GOTH1K-influenced deconstructed club sounds of her early mixtapes, like &&&&&, Sheep and Entrañas, and on the other hand an abstract concept piece unlike anything she's given us before.

Arca envisions "@@@@@" as a futuristic broadcast from a "speculative fictional universe in which the fundamentally analogue format of FM pirate radio remains one of few means to escape authoritarian surveillance powered by a hostage sentience gestated by a post-singularity AI." Hosted by a Ghost in the Shell-eque non-corporeal entity known as DIVA EXPERIMENTAL, the mammoth single tumbles from one rhythm to the next interspersed with ASMR monologues, effects-laden arias and sculpted noise running throughout.

"@@@@@" is also accompanied by an equally dystopian video, directed by Frederik Heyman, that sees a six-titted Arca strapped to the hood of a totaled car while footage of her posing is projected on loop across a desolate hellscape. With visual references to past performances, "@@@@@" feels like a bridge between the Arca we think we know and the one we've only just begun to meet. Her latest has us excited to see what else the future just might hold for the perennially surprising artist.

In addition to the new single, Arca has also announced a new slew of tour dates slated for this spring, check out the full list, below: