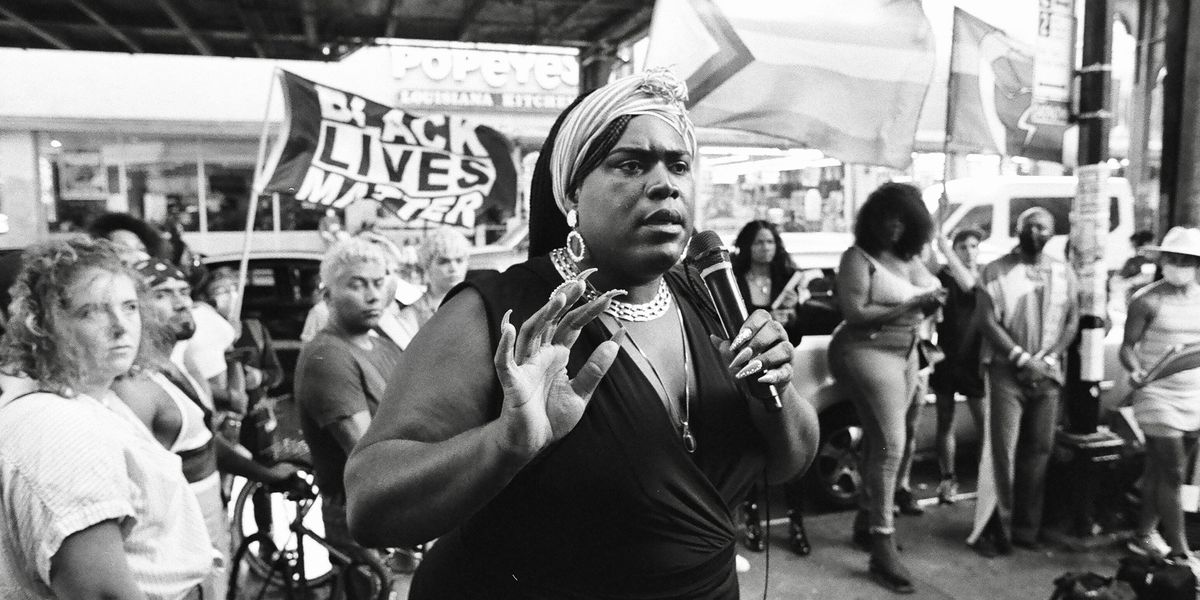 With staggering stature and a powerful voice, Qween Jean laid the gospel.

In a prominent Puerto Rican neighborhood in the heart of Bushwick, a large congregation of protestors gathered in front of 1559 Broadway on Wednesday, September 8. This bodega was the location where two men were recently stabbed. Abimbola Adelaja and his friend were inside when they were violently attacked by several men and called anti-gay slurs. The rally and march, which was surrounded by a heavy police presence, aimed to hold the bodega accountable for its lack of action and to create a safer space for Bushwick's LGBTQ+ community.

Qween commanded the crowd, voicing fury at the bodega's refusal to support the two victims. Adelaja had asked the workers for help in the aftermath of the attack, but they didn't even let him borrow their phones to call 911 and were adamant that he leave the store immediately. Adelaja ended up flagging down a passing ambulance that took him to Woodhull Hospital for treatment. Unfortunately, this happens far too often in this demographic. Qween underlined the bodega's fear of speaking out and how their involvement may potentially label them as "the gay bodega."

There were many poignant speakers at the protest, Qween Jean and Gia Love being among them. They spoke with conviction and led the small march down Broadway towards Bossa Nova Civic Club, a popular venue within the local queer community where another stabbing had taken place less than a week ago.

The crowd's chants eventually gave way to cheers and dancing, with ballroom and vogue-inspired movements. Protestors danced along with speakers in solidarity, though sadness and anger still hung in the air — not only because these tragedies occur so frequently, but because they are still happening despite decades of fighting against them. The rally took place not only to call attention to the injustices against the Black LGTBQ community, but to highlight the blatant and underlying homophobia that is prevalent even in a liberal state like New York, in a "progressive" borough like Brooklyn.

As the crowd marched through the Bushwick streets (in a predominately Spanish-speaking neighborhood), they chanted in Spanish, "Las vidas trans importan," or "trans lives matter" in English. The march concluded at Bossa, which says it has since stepped up security measures in the aftermath of the stabbing, and will now require patrons to be patted down prior to entering.