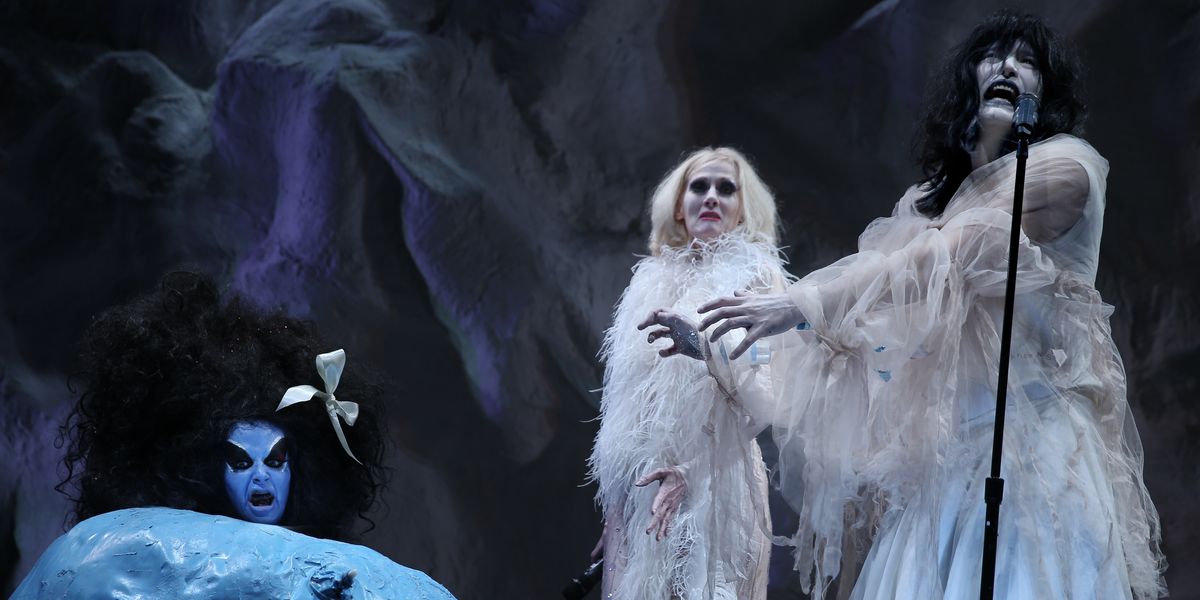 This month, transcendent artist and musician ANOHNI presented a play she wrote, directed and scored at NYC's legendary non-profit arts space, The Kitchen, entitled SHE WHO SAW BEAUTIFUL THINGS — a two-act performance art piece made in memory of renowned intersex performer, model, activist, and mathematician, Dr. Julia Yasuda, who died July 2018 at age 75. The show built upon the first draft of this work, appearing initially in 1996 with the thesis: "a hermaphrodite searches for her parents in an apocalyptic landscape."

ANOHNI's love for Yasuda began with an mid-'90s introduction to her through the late New York trans artist and activist, Chloe Dzubilo, who wrote plays with and for ANOHNI's Blacklips Performance Cult, and edited the group's zine, Leif Sux. Upon meeting, the two bonded deeply, and Yasuda became ANOHNI's muse for the next 20+ years. She was one of the three founding members of The Johnsons in 1995, named after Marsha P. Johnson, and performed both as a central protagonist in their plays and onstage during the group's musical sets, often appearing as a mystical, ghostly presence.

The group produced four albums from 2002 to 2010 and toured internationally. Yasuda also starred in several of ANOHNI's music videos, up until "Obama" in 2016 from her solo debut, 2015's Hopelessness. In her final years, she modeled for art photographer Alice O'Malley while living on Fire Island. Yasuda took her own life on July 23, 2018 following a struggle with chronic pain, related to her cerebral palsy and Klinefelter's Syndrome diagnoses.

When it came to SHE WHO SAW BEAUTIFUL THINGS, ANOHNI created a lyrical show that honored Yasuda's legacy while taking an unflinching look at life, death, and renewal, whether through earthly ecosystems or the cosmos. These are themes that ANOHNI has spent her entire career exploring. But it was rendered through visuals that were alternately surreal (dreamlike sequences depicting bodily and environmental violence), absurd (Kembra Pfahler's onstage blister-popping; Laurie Anderson's too-long repetition of the words "take and take"), and painfully real (Connie Girl's tragic monologue on the disproportionate socioeconomic struggles trans women of color face). At various points, ANOHNI included voicemails and notes from Yasuda, which gave crumbs of the kind of person she was.

At the show, a hardcover, limited-edition book of portraiture photography by Yasuda's late wife, Erika Yasuda, was offered, which ANOHNI had reprinted and expanded. The images were interlayed with drawings by ANOHNI. More work revolving around Yasuda's life will on display at The Kitchen through May 11, from videos to paintings and sculptures. Titled LOVE, the exhibition underlines ANOHNI's career of creating work that stretches across mediums.

As the play's rehearsals concluded earlier this month, PAPER caught up with ANOHNI, who spoke about the unique relationship queer people have to the environment. She also shared profound lessons her dear friend Julia Yasuda taught her.

Your work has always centered environmental concern. How does it weave into your tribute to Julia?

What are your thoughts on trans and queer people's relationship to nature?

I have this feeling that trans people or gay people with memory of the worst era of AIDS in New York, we have a unique relationship to this notion of exodus of souls; to the exodus of species; to the exodus of diversity. It's a microcosm of the same kind of vanishing. For instance, when 9/11 happened in New York, everyone was so shocked but some queer people I knew were like, We already know what this feels like. We know what it means to have thousands of beloved souls disappear. We have reference for apocalyptic cataclysm in our bodies. Our experience brings us into the conversation of the eco-collapse if we want to be brought to it. Gay and trans people in particular, I feel, are the children of nature. We manifest despite the very best efforts of society to crush us.

We are the naturally allocated foot soldiers of nature. We have a unique relationship, a non-Christian relationship, to the goddess. Mother Nature gave birth to us. Our parents didn't invent us queer people. We were born as disruptors into this society. We reorganized the conversation. This is in our blood; it's in our biology. We should reach to nature and represent her.

"You can't be a gay rights activist without being an environmentalist, because subjugation of women is built on the back of subjugation of the planet."

What was one of the greatest things you've learned from your relationship with Julia?

Julia's last message to me was that there is no control — you can't control life. She was very passive in one way, even though she did so much. She was almost blown from station to station, all over the world due to circumstance. She was born during World War II in Japan-occupied China. All of the extremes of her life, starting out with cerebral palsy, Klinefelter's Syndrome and being an accomplished mathematician, marrying the love of her life and being a beautiful model, and her wife dying of cancer and moving to New York feeling so heartbroken. Getting SRS, becoming my muse, moving to Fire Island. She really accepted the breeze and where it was taking her, until the very last minute. The other thing she left me with was she really believed that femininity was the abstract world itself and was the universe. She had a rational but extremely intuitive take on femininity, and didn't really like masculinity. She called it "ugly ducky stuff." She thought that the feminine was beautiful, she worshiped at that altar and served that archetype throughout her life. I just miss her.

Credit: ANOHNI, The Johnsons present SHE WHO SAW BEAUTIFUL THINGS, at The Kitchen, April 20, 2019. Photo by Paula Court, © ANOHNI.