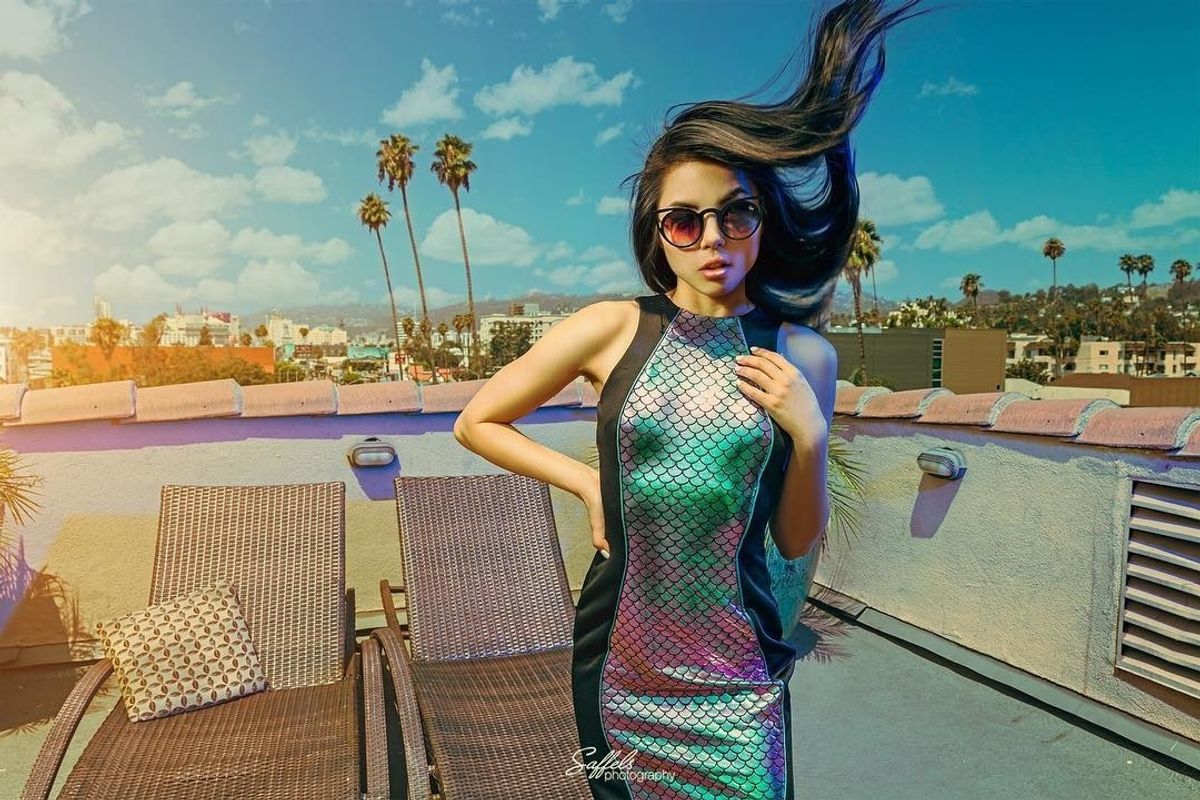 Growing up as an Asian teen, you wouldn't really see yourself represented in the dramas and series you binge-watched on a school night. And even if you did, more often than not, Asians and Asian-Americans are still type-casted as the geeks, nerds, and overachievers of the pack. It's rare to see a Queen Bee who isn't the typical blonde, skinny, pink-clad barbie. But in YouTube Red's Youth & Consequences, Anna Akana changes all of that.

From doing stand-up comedy at 19, producing her own vlog content (sometimes with guest stars like Daniel Radcliffe), and publishing a book with Penguin Random House, 28-year-old Akana finds herself going back to high school for the show, which premiered its first season on March 7th. The original series is a dark, sexy and scandalous take on a teen trendsetter's tale, and she plays the lead role of Farrah Cutney — a power-hungry, cunning high school queen who commands respect, and is willing to do anything and everything to get what she wants, but still has a heart for what she thinks is right.

Anna talks to PAPER about representation, breaking out of the mold, and pitching a pink tent on Hollywood Boulevard.

Describe Farrah in a few words.

Farrah is a complex person who isn't afraid to be disliked in order to get what she wants.

Why did you think it was important that you play Farrah?

I don't know if I ever thought, "Oh, it's important for me to do this!" as much as "I want to do this so badly!" Especially because, in my experience as an Asian-American woman, the more complex roles I got to play, I've had to create myself. Maybe because you just don't imagine an Asian woman as the protagonist. So, in that respect, it was important when I partnered YouTube and Mark Gordon to have a diverse cast. My main antagonist is Asian. Three of the four in the main ensemble [isn't white]. We have a transgender storyline.

I felt really good about having a project in my control that I practice my values in.

There are definitely more diverse shows these days, but Asians still tend to be type-casted as the nerds and overachievers in high school. How important is it that Farrah breaks these stereotypes?

Representation is everything. They do film studies now that say what you consume growing up affects what career you go into, whether or not you get married, your hobbies. I owe my entire career to seeing Margaret Cho perform stand-up. I think it's so important to see women who look like you on-screen who are more than just a one-dimensional stereotype. I think we do that really well in our show. A huge part of that is Jason [Ubaldi's] writing, but another part of that is ethical casting and making sure that we're reflecting the real world in our cast.

How is Farrah relatable to everyday Asian-American teenagers?

I think she's going to be relatable because not all of us are just meek and timid. Half of what I always saw on-screen was a girl who was crying over getting a B versus an A. Or someone with an accent, not that there's anything wrong with that. But I couldn't relate to these people because they were caricatures in a way.

I think everyone will relate to the fact that not everything you do is for good or for evil. You have different motivations. You're a complex human being and you compromise your moral code sometimes in order to do something for another person. I think she's just so well-written. And I love that you can see parts of yourself that are empowered and fierce, and sort of manipulative sometimes. I feel like we don't get to see that in an authentic way on-screen for Asians.

How does high school Anna relate to Farrah?

I think Farrah's much more cunning than I am. I'm much more of a people-pleaser. The one thing that I think I really share with her is the sense of justice. Whenever she sees something awry, she really takes it upon herself to fix it. The other day on a plane, these two women were being so mean to the flight attendant, and were just causing havoc and laughing about it. I got so upset that me and another passenger started sticking up for the flight attendant, saying "Hey, you're a grown-ass woman. Calm down!"

Did you ever see yourself playing the high school Queen Bee?

I mean that was always the dream. In the last few years of Hollywood, it definitely became a thought of "Will this actually happen for me?" Definitely was there. I always, to some degree, have seen that for myself. It's essential to have that sort of visualization in order to make it come true.

Did you ever do theater in high school?

In high school, I was definitely in the theater program. I was awful. (laughs) I remember I showed up to audition for Anne Frank once, and my drama teacher was like, "Why are you here?" I didn't understand why I couldn't be Anne Frank. (laughs) I also remember when I was five years old I played the Little Red Hen in a hand puppet play, and I was thinking, "Ah, yes! Acting!" So I dabbled a little bit, but growing up with Asian parents that was not going to happen. You were either going to the military or be a doctor or whatever.

How do your parents feel about all of this now?

They're super supportive. They were not on-board at first. I dropped out of community college and they said, "Uh, no. You're not going to move to LA and do this. You have to go get a traditional education." But then, the first time they saw me perform stand-up, they got it.

I remember auditioning for Last Comic Standing once when I was really young, and my dad camped out with me. He brought this pink princess tent. He thought it was hilarious and gave it to me because we had to be on Hollywood Boulevard.

Now that Youth&Consequences is out, what's next?

I'm going to China in April. I'm doing an indie feature right now. I'm also working on an album, and I hope we get renewed for a second season!