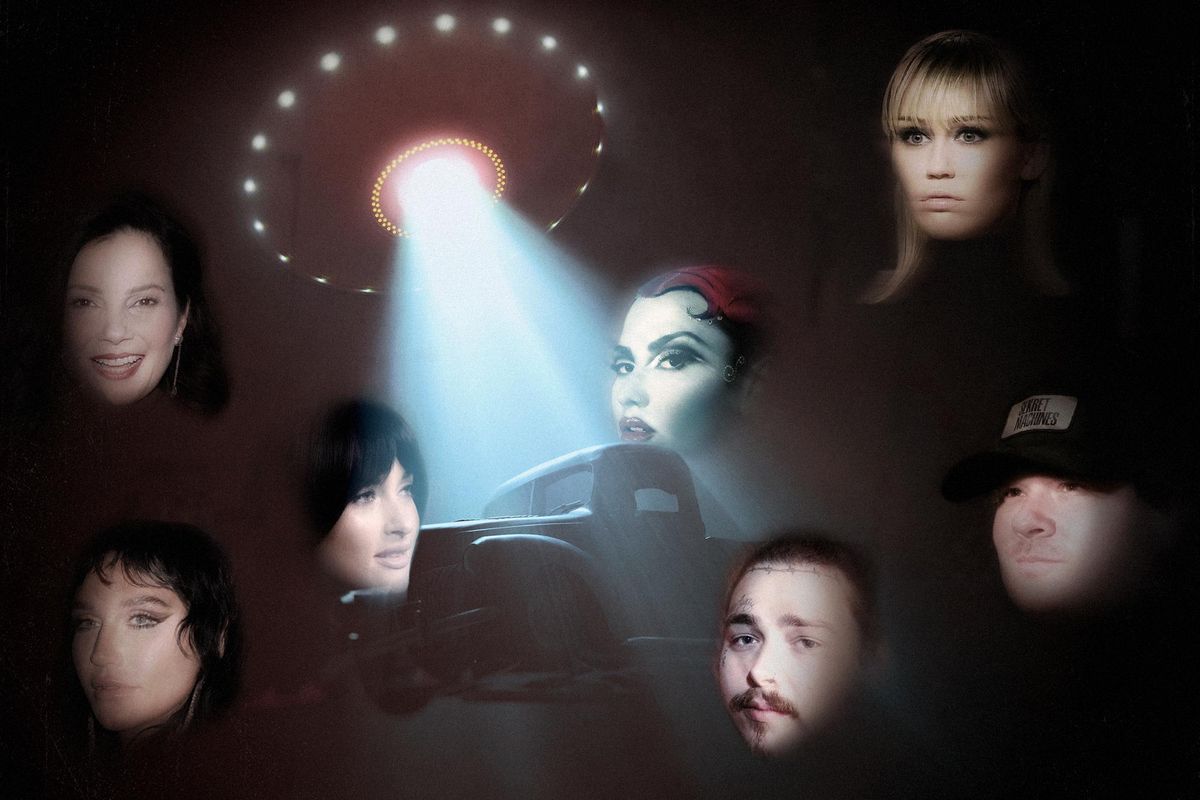 Ever since an unidentified flying object crash-landed in Roswell, New Mexico in 1947 the American public has been fascinated by aliens. Where did they come from? What do they want? Have they truly visited us? Why do they seem to be so fixated with probing people's asses?

Out collective obsession with extraterrestrial encounters has permeated the far corners of pop culture from countless movies like Mars Attacks, Contact, Men In Black, Arrival, etc. to TV shows like the X-Files, 3rd Rock from the Sun, ALF and even extending to across music from Bowie's "Space Oddity" to Katy Perry's "ET." According to a recent Gallup poll, roughly a third of Americans believe aliens have visited our planet with approximately 20% claiming to have seen a UFO in person.

However, what that number doesn't take into account is the disproportionate amount of celebrities that have had their own close encounters with beings from the great beyond. Any amount of digging into the subject will turn up a — frankly — absurd amount of celebs that have gone on record to talk about coming into contact with aliens, spotting UFOs and the like. From Post Malone, who claims to have seen multiple UFOs throughout his life including one outside his bedroom window in upstate New York when he was 16, to Kurt Russel, who was one of the first pilot's to report seeing the one of the largest mass-reported UFO sightings of all time as he flew in Phoenix in 1997, the sheer amount of interview quotes and talk show anecdotes would lead one to believe that aliens aren't all hiding out in Area 51 but rather cruising down Santa Monica Boulevard.

We take a look back at some of the most buckwild celeb alien encounters we could get our hands on.

Not only has this pop singer seen UFOs, but she's determined to make contact with aliens through mass meditation. Last October, Lovato shared images and video of what she claims to be UFOs she spotted on a retreat in Joshua Tree with friends and Dr. Steven Greer, who according to his Instagram bio is "one of the world's foremost authorities on the subject of UFOs, ET intelligence and initiating peaceful contact with ET civilizations."

In the accompanying caption, Lovato says that over the past few months she has "dug deep into the science of consciousness and experienced not only peace and serenity like I've never known but I also have witnessed the most incredibly profound sightings both in the sky as well as feet away from me." She then went on to say that the planet is currently on a negative trajectory and that "if we were to get 1% of the population to meditate and make contact, we would force our governments to acknowledge the truth about extraterrestrial life among us and change our destructive habits destroying our planet."

Rallying her followers to join in the collective effort to make contact with extraterrestrials, Lovato encourages them to download Dr. Greer's $10 CE5 app that will supposedly help teach the proper protocols involved in opening up your consciousness beyond the galaxy.

Talking to Rick Owens for Interview, Miley Cyrus revealed that she was "chased down by some sort of UFO'' one night while she and a friend were driving through San Bernadino. "The best way to describe it is a flying snowplow," Cyrus recalled. "It had this big plow in the front of it and was glowing yellow. I did see it flying, and my friend saw it, too."

The former Disney Channel star did admit that it could have been the weed wax she had bought off "a guy in a van in front of a taco shop" talking but "there were a couple of other cars on the road and they also stopped to look, so I think what I saw was real." Cyrus goes on to say that she didn't feel threatened but that she did make eye contact with some sort of being that was in the front flying the spacecraft and that it left her "shaken for, like, five days" afterwards.

Out of everyone on this list, former Blink-182 frontman, Tom DeLonge, is perhaps the most dedicated to the UFO truther cause. The musician founded the To The Stars Academy, which employs former CIA agents and conducts UFO research that has even been cited by the New York Times.

Last year, DeLonge and his organization not only succeeded in getting the US Navy to verify footage of purported UFOs that they had uncovered but also got the Pentagon to declassify three of those videos of unidentified aerial phenomenon. It can be argued that this set off a chain of events that saw the pentagon set up a taskforce to address the UFO problem, the CIA to release thousands of their own reports pertaining to UFOs and a former head of the Israeli Space Program to claim that aliens had already been on Earth observing for some time figuring out whether or not we were ready to join their Galactic Federation. It was 2020 though, so you'd be forgiven for letting all that fly under the radar.

The Nanny star is convinced that not only was she abducted by aliens in her youth but they were the reason she and her ex-husband, Peter Marc Jacobson, actually ended up meeting. In a 2012 interview with the Huffington Post, Drescher says that both had similar experiences seeing aliens while they were driving with their respective fathers before they had even met. Years later, Drescher noticed they had the exact same scar in the same place on their hands and said she believes that's where the aliens implanted a chip.

"I think that somehow we were programmed to meet," Drescher says of the coincidence. Jacobson, however, was less convinced and explained away Drescher's scar as being from a drill bit mishap or from holding a hot cup of water. The actress, steadfast in her belief, claims "that's what the aliens programmed us to think. But really, that's where the chip is."

As it turns out, aliens like to have a weekend getaway at Joshua Tree just as much as celebs. In 2017, Kesha explained that the UFOs on the cover of her album, Rainbows, were inspired by her own personal sightings. Prefacing that she was stone-cold sober at the time, Kesha says that she saw five to seven lights in the night sky over Joshua Tree that disappeared and returned in different formations. "I don't know why I didn't like try to take a picture of it — I just looked at it," she later said. Kesha went on to double down on her belief with an Instagram pic of a bedazzled UFO sweater along with the caption "ufos are real. i have seen them. not playing."

In a 2019 interview with NME, the country music singer explained that she has always been fascinated with space. "At a young age my dad got a telescope which we would take outside," Kacey Musgraves recalls. "We lived out in the country so there weren't any lights around. You could see everything really well. He showed us how to spot satellites which in retrospect is kind of insane." And it turns out that all those years spent stargazing has turned up more than just passing satellites.

Musgraves claims to have spotted quite a few UFOs. One encounter Musgraves distinctly remembers happened while she was in Mexico for a friend's wedding, "we were on the beach around 11 at night. I noticed something hovering above the corner of the hotel. In the night sky it kind of looked like the underbelly of a bird." Having alerted her friends to the strange object illuminated by the hotel's floodlights, Musgraves goes on to add, "we all watched it for a minute and then it changed shape into an X-pattern, like a windmill shape. It was so weird! We were like: 'Oh shit, that is so not a bird!' We watched the thing for a good 10 or 15 minutes. Then it started glowing and doing things that nothing normal would do. It was crazy."

On top of all that, just a few days later Musgraves says she saw "two giant balls of fire" floating in the night sky over her neighborhood in Nashville. Musgraves and the authorities haven't been able to explain what she saw but if the aliens think they can take the Golden Hour singer for themselves, they have another thing coming.

It's hard to explain the logic behind it, but it just makes too much sense that January Jones has seen a UFO. (I mean, how else would you explain her unhinged Instagram presence if not for intergalactic intervention?) The Mad Men star told Jimmy Kimmel that during her early twenties she saw a light moving erratically in the night sky over a field in Iowa. "It was definitely a spaceship," Jones says, "or a shooting star that just couldn't figure it out." Kimmel naturally follows up with a question about whether or not she was on anything at the time or if anyone could corroborate her claim, Jones insists she was stone cold sober at the time and that there was another person in the car when she witnessed this but unfortunately he didn't catch it.