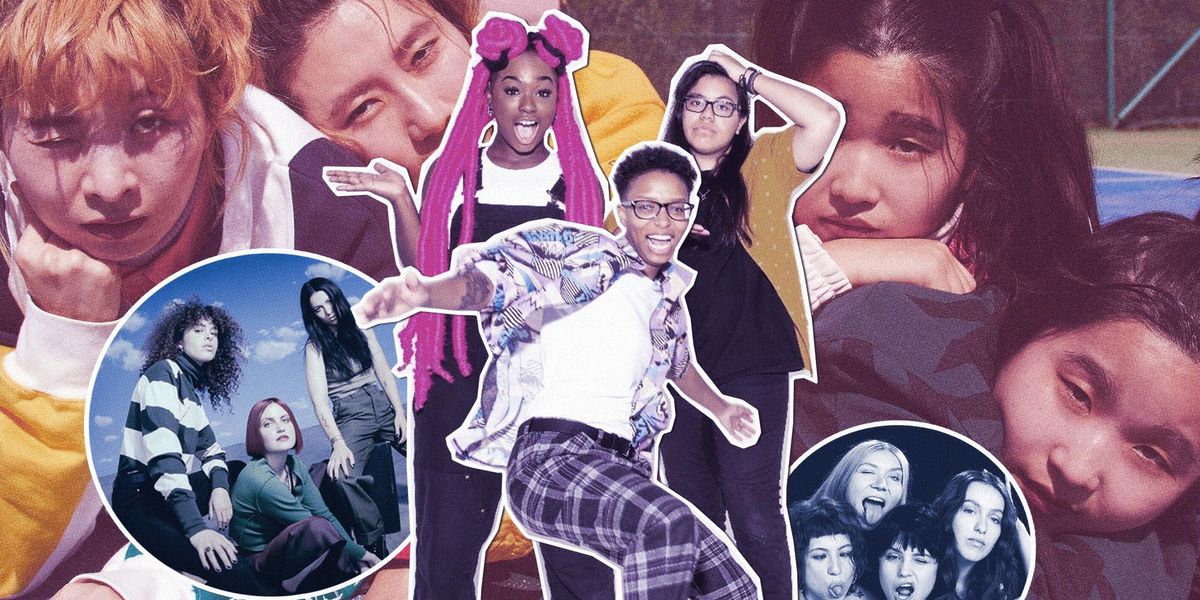 In early March, Maroon 5 lead singer and near-perpetual Voice coach Adam Levine sparked backlash with a questionable comment about the future of bands. During an interview with Apple Music's Zane Lowe to promote "Beautiful Mistakes," Maroon 5's new single featuring Megan Thee Stallion, the frontman lamented the supposed lack of bands today compared to the era in which his group rose to fame.

It's true that the music landscape looked a lot different when Maroon 5 released their debut album, Songs About Jane, nearly two decades ago. In fact, the bands that are popular in the music zeitgeist today don't even really look like Maroon 5 — or many of the other bands that Levine's group shared the charts with in the 2000s, for that matter.

Aside from No Doubt and Evanescence, two major bands fronted by women singers, as well as the all-female country group formerly known as the Dixie Chicks, the majority of high-profile bands played on the radio in the post-Y2K era were comprised solely of men, typically white: Trapt, Puddle of Mudd, Matchbox Twenty, 3 Doors Down, Green Day, Nickelback, Lifehouse, The Killers, Foo Fighters, Coldplay and The All-American Rejects are just a small handful of the bands who, like Maroon 5, reigned on the Billboard Hot 100 in the 2000s.

While it's likely that Levine was specifically pointing out the lack of bands currently on mainstream Top 40 radio, which, to be fair, is a space currently dominated by solo pop, hip-hop, and R&B artists — the frontman did specify that "there still are plenty of bands, and maybe they're not in the [pop] limelight quite as much" — his initial response was nevertheless harmful as it perpetuates the erasure of a large movement of diverse bands who are in the midst of an exciting revolution for the diversification of representation in music.

Though there is still a long way to go, as we push further into the 2020s, unique viewpoints and experiences are finally being represented and reflected across all genres — especially in rock, where women, POC, queer, and nonbinary musicians are beginning to take up more space and make their voices (and stories) heard.

Visibility for women musicians has actually been a driving force for the creation of new bands in recent years. HAIM is probably one of the most notable examples of this: the sister trio (Este on bass and vocals; Danielle on guitar, drums, and lead vocals; and Alana on guitar, keys, and vocals) is an omnipresent force, often landing on major playlists and collaborating with artists such as Taylor Swift and A$AP Ferg. They've also nabbed three Grammy nominations, two of which are pending for 2021 (Album of the Year, Best Rock Performance).

Then, there's Nasty Cherry, the Charli XCX-conceived pop-rock group composed of singer Gabi Bechtel, guitarist Chloe Chaidez, bassist Georgia Somary and drummer Debbie Knox-Hewson. In 2019, the group was even the subject of a Making the Band-esque Netflix docu-series called I'm With the Band: Nasty Cherry. (Chaidez is also the lead singer of alt-rock/new wave band Kitten, another rollicking group that's been on a steady rise since the mid-2010s.)

Queer perspectives are also shifting towards the forefront. The members of MUNA, one of the most prominent bands in recent years, all identify as queer. The SoCal trio (Katie Gavin, Josette Maskin, and Naomi McPherson) frequently address issues regarding gender and sexuality in their music, including songs such as "I Know a Place," which is about the 2016 Pulse nightclub shooting. Based in the UK, Pale Waves, which is fronted by lead singer Heather Baron-Gracie and includes at least two openly queer members, is also making space for feminist, LGBTQIA+ representation in the pop-rock sphere.

Racial diversity in bands also seems to be on the rise. Composed solely of women of color, two of whom are gay, Meet Me @ the Altar is shaking up the white male-dominated pop-punk scene. Then, there's explosive London-based alt-rock duo Nova Twins, who are reclaiming their space in rock, a genre pioneered by Black musicians in the early 20th century. On the other side of the globe, Japanese all-girl band CHAI — composed of lead singer and keyboardist Mana; guitarist Kana; drummer Yuna; and bassist Yuuki — is redefining the concept of "kawaii" through their radical brand of energetic post-punk music and pointed reclamation of the color pink.

Perhaps even more important than the sheer intersectional visibility these bands are providing are the themes they're tackling in their music. CHAI sings about beauty expectations and autonomy on "No More Cake"; Nova Twins tackle sexual harassment and cat calling on "Bullet"; and Pale Waves addresses the suffocating societal restrictions placed on women on "You Don't Own Me" — stories and experiences which weren't exactly being explored by the white male bands of the Maroon 5 era.

If Levine truly believes that bands are a "dying breed," it's pretty clear that the singer's definition of the word "band" excludes queer identities, women, and people of color: often-marginalized groups who are undoubtedly breathing new life into the rock and band music space. (It's a little ironic, considering so many of Maroon 5's hit collaborations in recent years have featured women as well as non-white artists, from Christina Aguilera to Cardi B and, now, Megan Thee Stallion.)

Perhaps Levine would feel less sad if he updated his playlist.