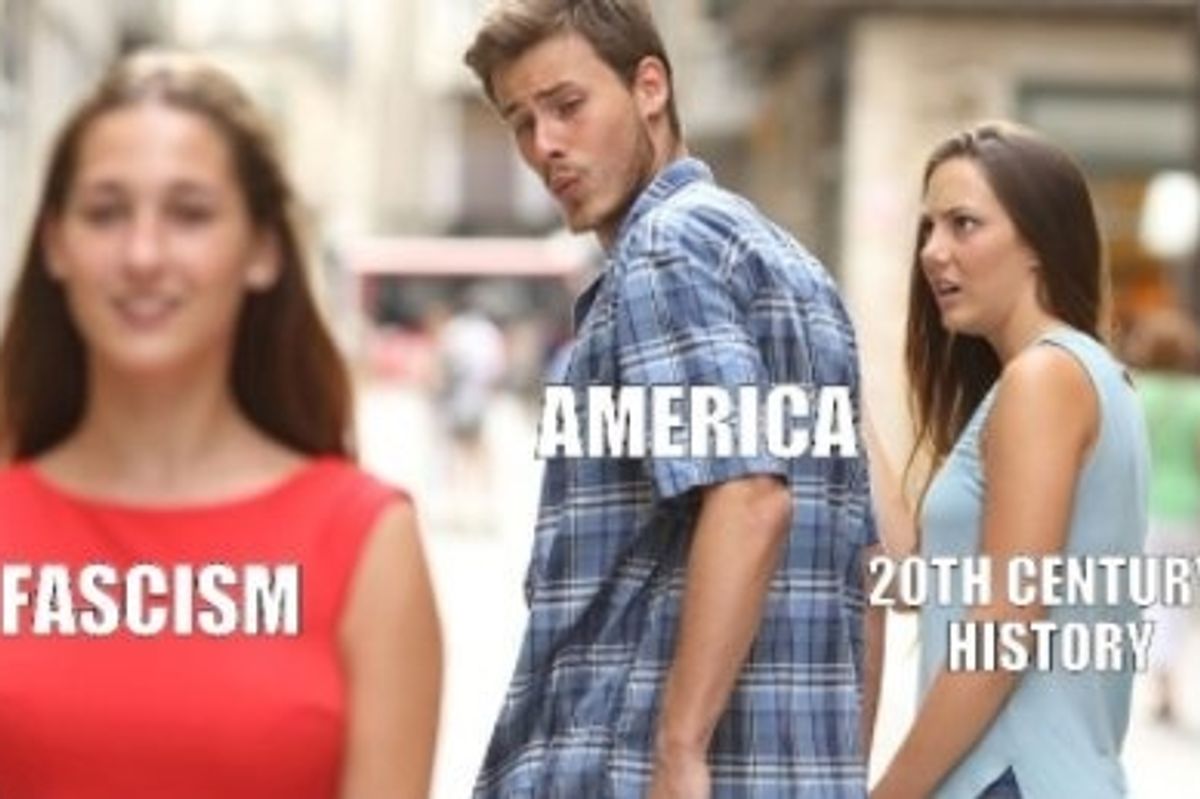 As our channels of communication become ever more splintered, niche, and downright untrustworthy, one medium that translates across our closed-off worlds is the meme. When a meme takes off, it spreads like a virus, occasionally making a permanent mark on the culture before fizzling out and into oblivion, and this year memes proved to be a much needed link between cultures as they seemed to last longer and propagate more quickly than usual. 2017 upset decades of cultural and political norms, and generic ways of communicating became even more important as a lack of understanding escalated from a social nuisance to a full blown crisis. At least we had Spongebob and Bella Hadid to provide a little comic relief as the world was pushed even further to the brink! Below, the 10 memes that defined 2017:

2017 has been a hell of a year, and perhaps no one knows this better than Drew Scanlon, a video editor and podcaster whose reaction during a niche 2013 video game clip went viral and came to define one of the most confusing years of recent history:

someone: dont say the n word if youre not black


On January 20th, 2017, Donald Trump was sworn into office as president, and on January 23rd, he signed several flashy executive orders, including the controversial decision to leave the Trans-Pacific Partnership:

Leave it to the internet to take a depressing moment like the above and turn it into something ridiculous (but still depressing):

A screenshot of actor Kayode Ewumi as character Reece Simpson (aka "Roll Safe") in the web series Hood Documentary, sums up the poor decision-making and lack of critical-thinking that defined this year better than words ever could:

can't fail any classes if you drop out pic.twitter.com/RPvGrVfhfi
— tyler durden (@lonetyk) January 25, 2017

You can't be broke if you don't check your bank account pic.twitter.com/brpgiWflym
— Ryan (@RyanWindoww) January 23, 2017

No one can hurt you if you detach yourself from everything and avoid becoming emotionally invested in anyone pic.twitter.com/VavUoE91YH
— leighsandra (@loxvatos) January 31, 2017

7. Nothing but respect for MY president


Before Donald Trump was even sworn in as president, people were declaring that he wasn't THEIR president anyway. So, who was? This meme, which technically began with a Trump supporter cleaning off the Apprentice host's vandalized Hollywood star, offered us a heap of far better candidates for the job:

Stopped and cleaned @violadavis's star. Nothing but respect for MY president pic.twitter.com/QcwYI6ZOsP
— Dorian Parks (@DorianParksnRec) July 4, 2017

(As always, people took it too far):

They say that often, the most specific stories are in fact the most universal, and this meme's absurd popularity proves that point beyond a shadow of a doubt. 'Distracted boyfriend' takes a hyper-specific stock photo and turns it into a metaphor for our nation's most vulnerable (and ridiculous) feelings, fears, doubts and desires:

Meme scientists from their hidden bunker have been experimenting with "Distracted Boyfriend" stock image,but most is quiet in Great Meme War pic.twitter.com/4HcZLFGZA6
— Rob Clark (@theelusivefish) August 24, 2017


This meme captured the desire among a certain subset of millennials to reach ever-higher levels of consciousness (and brag about their brain sizes, lol), starting with the use the word "whomst" and ending with a nirvanic explosion of thought about the BBC/nanny fiasco:

pic.twitter.com/5yjOeV73mA
— a ghost tickled my bootyhole in my sleep (@BasedKashiBar) February 14, 2017


Meryl Streep may have closed out these final chapter of 2017 defending her reputation as a supporter of women who does not enable sexual predators, thank you very much, but she spent the first half giving the internet life as the protagonist of a nostalgic and playful version of a sing-a-long meme:

Missy: "If its worth it then let me work it I put my thang down flip it and reverse it"

Lil Jon: "To the windooooooowwww"

3. If homeboy is coming through with these?


Supermodel Bella Hadid managed to shock the world this year, and it wasn't by switching up her hair color or breaking up with The Weeknd. No, it was with a very odd interview with Complex in which she explained in a monotone drawl that if homeboy came through wearing sneakers that weren't "fresh," things would be "quiet," but if he came through with a some Jordans or Air Maxes, then he'd like, get it. It was the interview that launched a thousand tweets and memes:

bella hadid said 'dope' 'fresh' and 'homeboy' within a 5 second span there has to be a law against that
— ℭruz (@elchapocruzman) October 5, 2017

homeboy comes through with that consistent support and attention?

if homeboy comes through in like these homeboys gonna like get it pic.twitter.com/fapGd7rlfA
— gary from teen mom (@garyfromteenmom) October 9, 2017

If homeboy still celebrates Colombus Day then it's quiet but if he celebrates #IndigenousPeopleDay then homeboy's gonna like... get it pic.twitter.com/vw1AQGIv6N
— Milan (@MilanMarietti) October 9, 2017

Of all the iterations of the Spongebob genre of memes, the one that features a mocking Spongebob is the most fitting for this grotesque tragic comedy of a year and our mounting contempt for one another and, ultimately, ourselves:

Him: *leaves me on delivered last night*
Him this morning: "good morning beautiful"
Me: gOOd MOrIng beAuTiFul pic.twitter.com/vfx4YJI0so
— adryanna celeste 💖 (@adryzzle) May 7, 2017

Netflix: Are you still watching?

Me: aRe U sTilL wAtcHiNg pic.twitter.com/ash2txCLug
— dairy free cuties (@yeahmomjeans) May 8, 2017

Donald Trump- "I wasn't ready to be president"

Though this wasn't the year's most ubiquitous meme, it's the one that most captures our desperate, quiet desire to be somewhere — anywhere — but in the godforsaken present. Preferably, we'd all be a thousand years out from this bullshit, barely able to remember the fuckery and exploitation of the past and living far beyond the limits of what any mind stuck in 2017 can imagine.