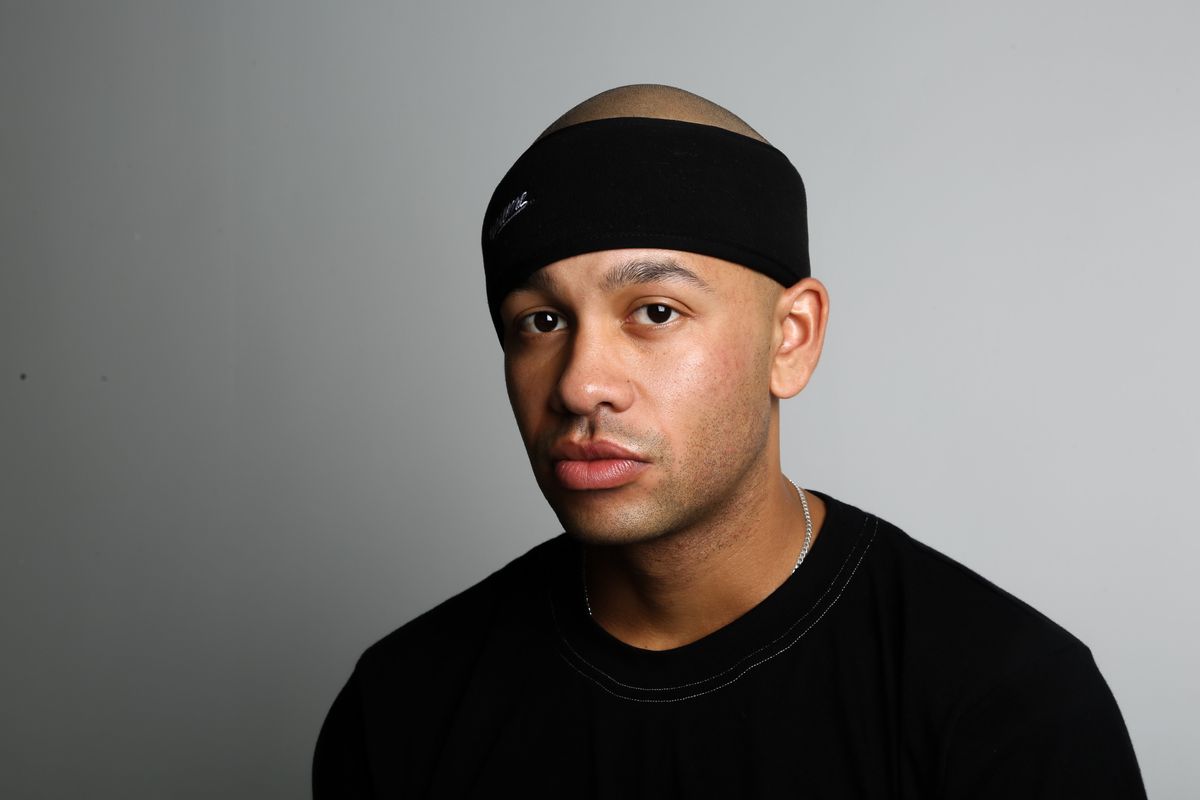 When 27-year-old South African rapper YoungstaCPT boasts about beautiful west coast palm trees, good weed, and pretty women, he's not rapping about the California cities that Dr. Dre and Snoop Dog lyrically illustrated in the '80s and '90s. YoungstaCPT's songs about the west coast are a reflection of his time spent growing up in the Western Cape, a coastal province in South Africa. "I can't believe how similar the Western Cape and California are, yet they are worlds and worlds apart," said YoungstaCPT. "That lifestyle of gangsterism, of danger, that they always speak about in Compton, Long Beach, South Central, and Watts, it sounds like the shit that we go through here."

On his newly released debut album 3T, YoungstaCPT explores the connection between the CPT of South Africa, an abbreviation for Cape Town — the city he grew up in — and the CPT of California, the city of Compton, which he drew significant lyrical and sonic inspiration from. Songs like "To Live and Die in CA," a play on Tupac's 1997 song "To Live and Die in LA," discuss the similarities between the areas' impoverished neighborhoods and gangster lifestyles over a remixed G-funk inspired beat. On the song, YoungstaCPT raps, I'm coming from the Wes-Kaap, west coast / It's like Cape Town and Compton are step bro's / If you don't understand our slang keep your bek closed / I grew up around 2 Pac's they were all on death row.

YoungstaCPT with his grandfather

The rapper first picked up on the similarities between the two distant places when he was in high school and began to take his music career more seriously. At the time, he was listening to Southern California-based hip-hop legends like DJ Quik, Xzibit, and Nate Dogg, and absorbing the street knowledge and good vibes that their songs delivered. "When we were in high school and shit, we would drive with Dr. Dre's album 2001 along the beachside," said YoungstaCPT. "For some reason, those songs sounded better when we took that drive. When Dr. Dre would say palm trees, good weed, pretty women, it sounded like he was talking about where I was."

Although YoungstaCPT started rapping professionally nine years ago when he graduated from high school, he still describes 3T as his debut album. "I feel like this is a debut album simply because I've put so much of me into it," he said. "This is how I would want to be received if someone heard me for the first time ever." Prior to 3T, the rapper released an impressive number of mixtapes, — 30, to be exact — which he recorded with the help of his long-time producer and now DJ, Muffin Man. YoungstaCPT and a number of other producers over the years would record, mix, and master these mixtapes in Muffin Man's garage. After the mixtapes were complete, he would upload them on SoundCloud and also burn CDs to pass out for free or sell on the streets and at his concerts.

On the early mixtapes, YoungstaCPT primarily rapped about "gangsterism" in Cape Town over popular tracks from Lil Wayne, Drake, Big L, 9th Wonder, and the late Nipsey Hussle. He was a true student of hip-hop, old school and new school, and shaped his sounds and lyrical content around the American hip-hop he grew up on. His affinity for legends like Big L and 9th Wonder was unusual for a South African kid, considering many of the local stations and DJs heavily rotated a mix of Billboard 100 Pop and R&B records. Yet, YoungstaCPT found solace in the lyrics of non-mainstream "reality raps," and used the experiences detailed in these songs to meditate on the violence, drugs, and gang activities that infiltrated his neighborhood.

Whereas his early mixtapes focused primarily on his experiences being both a bystander and participant of Cape Town street life, for 3T he sought to explore the political corruption, racial inequality, unemployment, and poor educational institutions that fueled criminality and violence in the city's impoverished areas. In particular, YoungstaCPT, who identifies as the South African racial group "Coloured," focuses on these issues and how they affect the nation's Coloured community. "The Coloured race isn't really spoken about because we are like the bastard children of South Africa," said YoungstaCPT. "We are the mistake of South Africa really if you look at it. Because we are the constant reminder of colonialism, and we are the constant reminder of imperialism because we exist."

The racial classification 'Coloured' in South Africa has been characterized in many different ways since it was formally established during apartheid. YoungstaCPT defines the Coloured community as indigenous people of Cape Town who were descendants of the early Khoikhoi and San people, who during imperialism, had children with European imperialists. "These were all people that were found in this land and then almost made to believe that it's not theirs or that they don't have a history anymore," said YoungstaCPT. "Now it seems like the Coloured history is lost completely. How is it that I know about my history but half of the new generation has no clue about what I'm talking about?"

YoungstaCPT speaks in depth about Cape Town's complex colonial and racial history, which intensified in the mid-20th century with the establishment of the racial caste system, apartheid. Today, White people, Coloured people, Black people, and the other less populated racial groups in South Africa are still grappling with the consequences, and for some, benefits, of apartheid's abolishment. On the album, he takes aim at South Africa's post-apartheid political system, which he blames for the slow progress the country has made in the 25 years since apartheid ended to develop true racial equality and lessen poverty amongst people of color.

"We sit here 25 years later with the problem of no electricity, no water, and the problem that we are the most violent city in all of South Africa. The murder rate is the highest, the gang-related murders are the highest in the whole of South Africa. If it was supposed to get better post-apartheid, I think they failed in that regard," explained YoungstaCPT.

Much like NWA and other West Coast rappers did during the '80s and '90s, YoungstaCPT is attempting to relay social and political messages through a medium that young people can relate to. Instead of shouting "Fuck the Police," a group he somewhat empathizes with in South Africa because of their lack of fair wages and small numbers, he's calling out the government, who he believes has been the primary culprit of state-sanctioned violence within the country. He said, "We take our example from authority and if the authority is not living up to that title than we are going to follow suit, we're going to follow the example being set. And if our examples are as corrupt as they are, worldwide it's not only here, then we're going to do exactly the same thing just on a smaller scale."

His understanding of the important roles leaders play inspired him to confidently assume a leadership position of his own –– the self-titled Voice of the Cape (VOC). On the song "VOC" he firmly declared, I am not a lecturer / Professor or a editor / But a educator who's been elected as the emperor / The mother city was pure 'til they corrupted her / My people are the sufferers so I'm running for governor. Also on the track is one of his greatest influences, his grandfather, who chimed in on the subject of politics and race at the end of several songs on the album. YoungstaCPT and his grandfather's stories detail the lives of the elders that lived under the formal apartheid regime and the "born-free" generation that is now grappling with how to live under a new type of oppressive system.

After listening to YoungstaCPT's album 3T, the parallels between American cities like Compton and South Africa's Cape Town are quite apparent. During the late '80s and early '90s when West Coast rappers were reflecting on the crack era and police violence, they were 25 years removed from segregation and the perceived notion of freedom. Now 25 years after apartheid, Cape Town's youth are now going through a similar experience of reawakening and recognizing that the freedoms that their elders fought for have not yet come to fruition. For YoungstaCPT, his music is not just about cool G-Funk beats and party tunes –– "I'm the voice of the people that you haven't been allowed to speak all this time. What do you think those people would say after all those years of silence? That is who I am. I am the first one to remove the gag and the blindfold, open the curtain and speak out."