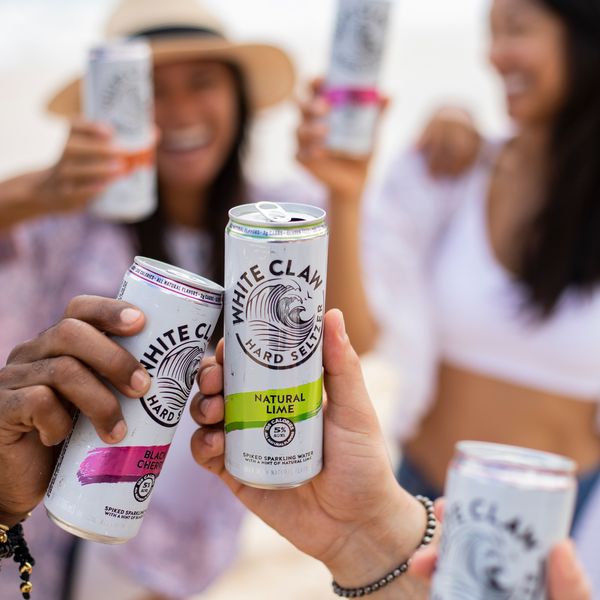 Why the Internet Is Obsessed With White Claw

Move over LaCroix. Joining the pantheon of beverages-turned-memes, White Claw has emerged — seemingly out of nowhere — as the poster child of summer 2019's hard seltzer obsession. And if the growing amount of video parodies, viral slogans, unofficial merch, and remixed memes are any indication, it's semi-ironic joke fodder that's not dying out anytime soon.

Because while there aren't any definitive numbers correlating the brand's spike in popularity with its virality, as we've learned from the onslaught of corny brand Twitters, a widespread online presence probably isn't hurting sales. Unlike Sunny-D though, the internet's embrace of White Claw started this summer.

As KnowYourMeme points out, it all began a couple months ago, arguably when YouTube comedian Trevor Wallace's "*drinks White Claw once*" video went viral. Supported by TikTok users and an increasing number of White Claw-centric meme pages, the internet's obsession with White Claw continued to grow. And now, it's gotten to the point where it's no longer just the purview of frat bros and wine spritzer girls.

Which brings me to my next question, why White Claw? Well, as outlined by sites such as The Takeout and The Daily Dot, White Claw's main appeal is its ubiquity, low ABV, and health-conscious branding that posits the drink as less hangover and more hydration. After all, if we've learned anything about the internet-at-large, it's that drinking water is key.

And while White Claw isn't the only hard seltzer on the market, it's definitely the brand with the biggest market share. As Nielsen reports, the company — which is owned by the same people who make Mike's Hard Lemonade — has grown exponentially since its inception in 2016. Accounting for more than half of all hard seltzer sales, sales of White Claw have increased more than 200% since 2018 and is currently the top growth brand amongst beers and flavored malt beverages.

Others have observed that White Claw — with its borderline cringey, "white girl wasted" reputation — is perfectly positioned to be ironically memed. One such person doing this is Kyle, a craft cocktail bartender who moonlights on Instagram as @WhiteClawSummer2019.

"It is that hint of douche," he says, explaining he started the account for other bar people who also have a reluctant relationship with the brand. "I get messages all day from people posting pictures of them drinking White Claws and it's all these fucking dumb people on a lake."

Kyle then goes on to detail a photo he recently received from someone proudly driving and drinking a White Claw, "Cause there 'ain't no laws when you're drinking Claws,'" he says sarcastically. "Just why?"

Kyle admits that he does drink White Claws on occasion, but he doesn't really understand the appeal of paying for what is basically a "watered down vodka soda."

"Some people are really into it, it's weird," Kyle says. "The irony factor amongst bar people is hilarious, because we think it's dumb. But for some reason, we still drink it."

However, the broader implications of propelling White Claw (or any brand, for that matter) to virality is also something to consider as artist Nathan Sims notes.

Sims — the meme-maker whose infamous Pamplemousse LaCroix Memes page helped put LaCroix on the map — says he's more critical of the White Claw craze as someone who basically acted as "unpaid viral marketing intern" for a similar company three years ago.

"What's the point if you're not going to skewer it?" Sims asks, later explaining that Pamplemousse LaCroix Memes' original intent was to make fun of the cultural mores associated with the "hyper-white, hyper-young, and hyper-trivial" world of the brand. "The way I see it, this is an opportunity to critique the whole viral marketing thing."

Sims concludes, "But, right now, it just feels like a wet dream for the Mike's Hard Lemonade people."

That said, Kyle sees it differently and says he doesn't plan on stopping until he either runs out of material or someone figures out who he is.

"I'm totally cool with all that," he says, mentioning he's already tried to reach out to the brand's marketing team. "Send me some White Claw swag, I'll totally take it."