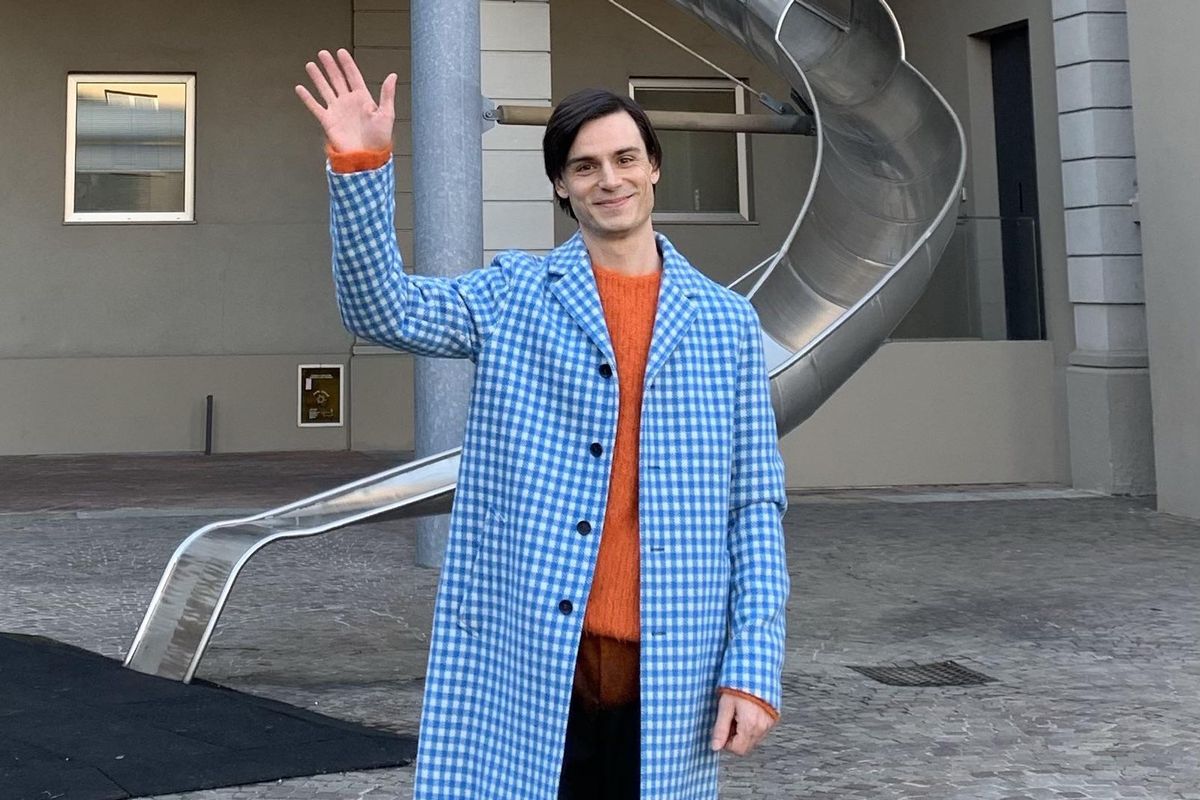 Some people wake up and choose violence. Guillaume Lavoie chooses Prada... Miuccia Prada, to be exact. And who could blame him? Life is full of many uncertainties, but one thing that remains steadfast is Miuccia Prada, the head designer of Prada and the founder of its subsidiary Miu Miu, who has been with Prada Holding SPA for 43 years. Muiccia first took the reins from her mother Luisa Prada in 1978 as only the second leadership transition in the house's 188 years (before Luisa, it was Miuccia's grandfather Mario and his brother Martino who started it all). And though Prada had a life for decades before Miuccia, Miuccia made the brand sing. She began with shoes. Then came the expansion of the stores across Europe. Next the development of "Prada Green." But it was nearly a decade into her tenure that Miuccia felt runway ready. And so, Prada's first fall/winter collection debuted on the catwalks of Milan in 1988.

Guillaume Lavoie was only three years old, but decades later he'd come to create a digital archive that's part historical reference, part celebration of the explicit and unequivocal genius that is Miuccia Prada. "For me it's the old world impeccable manners meeting intellectual rigour and iconoclast leanings that does it," he says. "She seems to be asking herself a lot of questions and never taking the easy way but at the same time being able to enjoy herself."

Lavoie was born and raised in Montréal, Canada. He first discovered fashion via Jeanne Beker, host of the Canadian television show FashionTelevision. It was there that he discovered the glamorous and highly telegenic fashion shows of the '90s: Madonna at Jean Paul Gaultier and the supermodels in fluoro at Versace. Concurrently, he says, he began to develop a love for the art of style. "I remember being drawn to Melanie Ward's styling in the sleek pages of Harper's Bazaar under Liz Tilberis. The pictures had an appeal that I was not able to explain, this mysterious thing called style."

These days he balances his "day job" ("I work with uniforms which is kind of funny considering Prada's obsession with uniform") with more academic projects on the side while also running @whatmiucciawore, an account he started in April 2018 intended as an exploration of Mrs. Prada's style, something he was surprised nobody had already done.

Below, we chat with Lavoie about the account, Mrs. Prada, the Raf Simons appointment and how he wants to see fashion change in a post-COVID world.

Do you remember your first time seeing Prada?

Prada the person or the brand? I remember seeing the "ugly" Mary Janes shoes on the last look pages of Vogue at the grocery store. The strange proportions, tacky brown-on-brown folkish flowers appliqués, and the crazily high chunky heels were a puzzling but exhilarating aesthetic shock. The famous Amber Valetta/Glen Luchford first Prada ad definitely had an impact too, I was fascinated by the cinematic and mysterious world it created. [Long pause] I just checked and the first picture of Miuccia Prada I saw was accompanying an article titled "Flip-flop Fad"! Mrs. Prada was in black and velvet platforms. What struck me was her posture, a mix of shyness, dignity and assertiveness.

What is it about Prada, the label, for you?

A fantastic world that I don't inhabit where everything is luxurious and considerate. Precious thing for your own pleasure. Something that's a bit off but quite right at the same time.

Related | @TheKimbino Is an Oracle of the Diet Prada Age

I think there's a quality about Prada and how it runs its business that separates it from its contemporaries. From my perspective, Prada doesn't try so hard — and I mean that as a compliment. Do you feel this way at all?

Yes totally, but I think it takes a lot of effort to look that effortless!

Do you have a favorite Prada red carpet moment? I'm partial to Sarah Paulson at the Ocean's 8 premiere or Nicole Kidman at the Killing Of A Sacred Deer premiere.

You're right, Sarah Paulson wins it all! It was such a fun and daring moment, she looks like she's having a ball with her fashion choices. On the other end of the red carpet spectrum, I thought that Frank Ocean at the Met was the coolest; chic, sober and effortless while being totally fashionable.

Related | What's the Future for @ShiasOutfits?

Is there Prada without Miuccia?

Where were your initial thoughts on Raf Simons appointment as co-creative director in February 2020?

I was really impressed by the proposition of the co-creative directors, it's such a bold move and it can be something dynamic with many possibilities to explore. It's also a huge bet as it's never been done before and breaks the idea of the almighty, single point of view of the designer.

Totally. I think many didn't take the necessary pause to consider its unprecedented nature. Thoughts on the appointment now having seen the work?

It's in this weird COVID context that the collections co-created were shown so far. It must be hard to have a "debut" collection and to open a new chapter. In this light I think the collections were an interesting start of the dialogue that I can't wait to see unravel through time… hopefully in more "normal" time soon. The two collections presented really nailed this current moment of shifting perspectives, digital acceleration and desire for clarity in confusion.

What do you say to those that say Prada has become Raf-ified?

He's now one of the two co-creative directors of Prada so it's a bit normal. It's what makes this collaboration dynamic. If he didn't bring his own perspective, what would be the point? Those reactions may also speak more generally of the relationship people have with change and their reluctance to it.

Let's talk about @whatmiucciawore. This could be perceived as an extremely niche endeavor and yet thousands have discovered the account, rapt as much with your images as the words you caption them with. How did you find that audience, or rather, how did they find you?

It grew slowly, but surely. What changed things was the first coverage I ever got on Dazed. It was also at this moment that I discovered the "request" mailbox. I was described as "mysterious" and "totally unreachable" in the piece, but I was just clueless as I never saw their message! Another important moment was when stylist Katie Grand started to follow the account. Her styling of the 2000s Prada and Miu Miu shows were when I became truly obsessed with Prada fashion, so it meant something to me.

What are you most proud of with the account?

That something that I started just because I felt like it ended up being successful; that I am able to explore writing, editing and art direction with this simple proposition.

Do you see Instagram as a tool to disseminate fashion history?

Yes of course. Instagram crushes time together, past and present, every decade is mixed altogether in your feed. In this ever-running flow of random references, it can be nice to have some context sometimes. I also think Instagram's instantaneity is a good tool to disseminate the present as well.

Are there other accounts like yours that you enjoy following?

I feel like I follow a zillion accounts and at some point it becomes big categories more than specific accounts: fashion archives stuff, museum stuff (@palais_galliera is a favorite), Prada-fan stuff (I love those but I'm not necessarily keeping up with it daily, as much as I love Prada sometimes I just need a Prada break) and just plain silly stuff.

How do you want to see fashion change when COVID is a thing of the past?

Right now I find it hard to imagine what a post-COVID world will look like, so I can't begin to think of the fashion world. But to finish on a positive note, I wish the flexibility and adaptivity that was used by the fashion world in this COVID moment can be used afterward to question the set rules and bring multiple, different voices. That would be great!