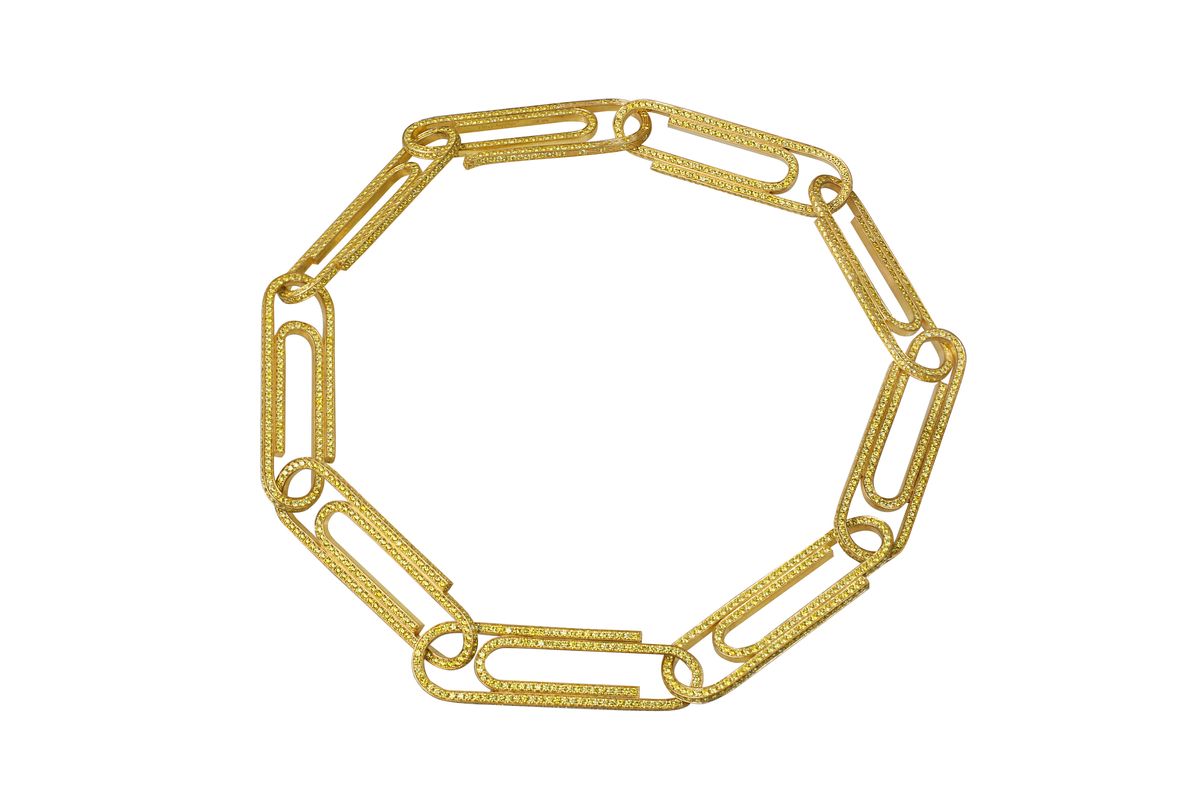 What do Howard from Uncut Gems and Off-White Head and Louis Vuitton Mens Director Virgil Abloh have in common? They'll cover just about anything in diamonds, it seems. Like the iconic, ridiculously iced-out Furby seen in the film, Abloh is bringing the world of ostentatious luxury to the mundane everyday in his new collaboration with jewelers Jacob & Co.

Fittingly titled "Office Supplies," Abloh has unveiled a new jewelry line that consists entirely of diamond-encrusted golden paperclips. Modeled after the same kind of faux accessories kids are known to fashion while bored at mom or dad's office, the collection consists of money clips, earrings, necklaces and bracelets available in 18-karat yellow, white and rose gold finishes embedded with a choice of white or yellow diamonds.

How much will these golden paperclips set you back? Anywhere from roughly $3,000 to $72,000, depending on the specifications with each made-to-order piece. But even if you have that kind of cash to burn, not just anyone will be able purchase the pricey clips. Prospective buyers will apparently need to fill out a questionnaire first that will then be personally reviewed and approved by Abloh and Jacob & Co. founder Jacob Arabo.

As to what sorts of questions people might have to answer on these questionnaires, Abloh isn't telling but if we had to venture a guess the only logical choice for such a piece would obviously have to be Steve Carrel's The Office rap-sona: Michael $cott. If you think you fit the bill, potential clients can email: officesupplies@canary---yellow.com to request an order form.

"I want it to feel very old school. It's bespoke," Abloh explained to Vogue in an interview about the collection. "The transaction becomes very particular so the consumer can value it as if they're owning a special piece from my studio rather than, say, a pair of trainers."

For Abloh the collection is more so a loving homage to the late '90s, early 2000s bling era that saw hip-hop industry titans flock to Manhattan's Diamond District to deck themselves out in glitzy eye-catching chains. Having crafted pieces for Notorious B.I.G., Jay-Z and J-Lo, this era earned Arabo the nickname "Jacob the Jeweler," making the Uncut Gems comparison even more apt.