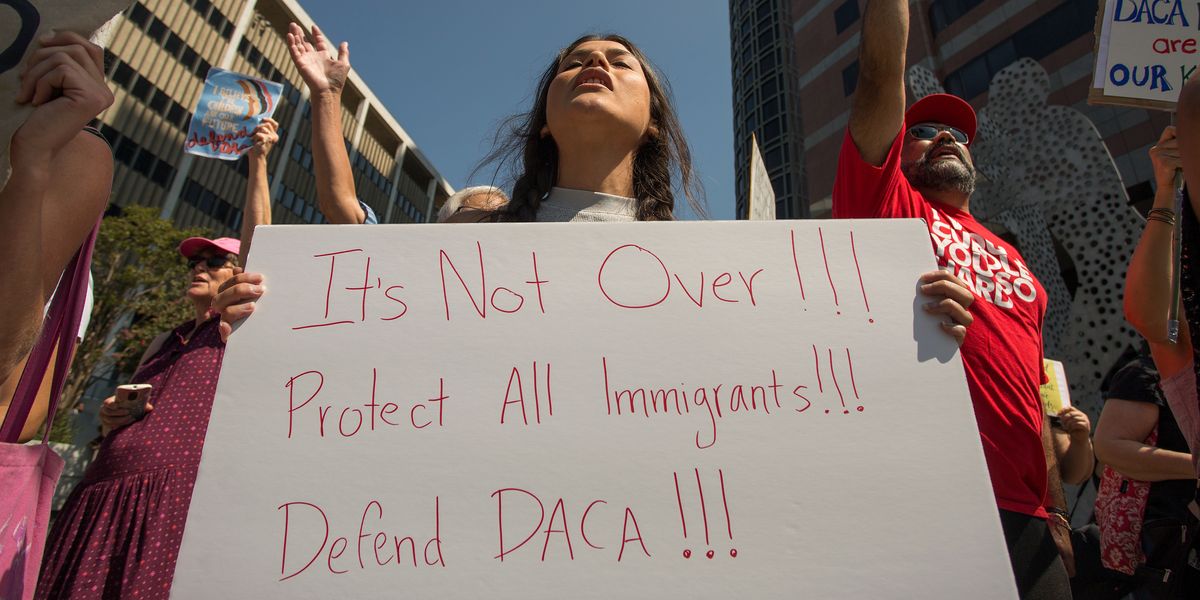 For the past five years, DACA has provided Dreamers, or children of undocumented immigrants who were brought to the United States prior to June 2007, a pathway to citizenship through the ability to live and work in the US, granted that they pass an extensive background check. Though Trump ran on a platform of building a literal wall along the Mexican border to keep immigrants out, he later said he would treat young immigrants - nearly 800,000 of whom qualified for DACA - with "heart." His understanding of 'heart' seems to differ from the generally accepted concepts of warmth, mercy and love, as per his administration they now have a six month "wind-down" period to leave the only country many of them have ever known.

"I do not favor punishing children, most of whom are now adults, for the actions of their parents," Trump said in a written statement, according to the New York Times. "But we must also recognize that we are nation of opportunity because we are a nation of laws."


Public outcry against this latest decision by the Trump administration has been immediate. CEOs of several massive corporations including AT&T, Wells Fargo, and Best Buy added their names to a letter in support of DACA. Last night, several Dreamers gathered outside Ivanka Trump and Jared Kushner's house to hold a candlelight vigil imploring the couple to save DACA (they have reportedly urged Trump not to repeal the program, but to little end). Today outside Trump Tower in New York City, a dozen or so activists, at least nine of whom were Dreamers, were voluntarily arrested for protesting the repeal.

Barack Obama even offered up some rare words, slamming Trump's decision in a lengthy Facebook post and saying, "Ultimately, this is about basic decency. This is about whether we are a people who kick hopeful young strivers out of America, or whether we treat them the way we'd want our own kids to be treated. It's about who we are as a people – and who we want to be."

In light of this news, we spoke with Sara Feldman, project director for Ready California at the Immigrant Legal Resource Center, a "cross-sector collaborative effort to support organizations providing information and legal services to immigrant community members" about how to stand up against the repeal of DACA and what to do if you are affected.


To fight against the repeal of DACA:

1. Contact your representatives in Congress and urge them to pass the DREAM Act. The DREAM Act (for which Dreamers are named) was initially proposed by Senators Orrin Hatch of Utah and Dick Durbin of Illinois in 2001, and though it has largely enjoyed bipartisan support, for political reasons the act has remained stalled in Congress. The passage of the bill would help those young immigrants effected by the repeal of DACA. Calling your representatives and putting pressure on them to pass this key legislation could make a big difference. Note: text RESIST to 50409 for help contacting your representatives.

1a). While you're on the phone with your representatives, you can also urge them to pass the Bridge Act, which would provide work authorization to young immigrants in the interim.

2. Attend the many community events popping up. Likeminded folks around the nation are coming together to rally and show their support for the population affected by the repeal of DACA. Check Facebook for DACA events and join them.


3. Make sure people in your community have access to information and know how to find free and low cost legal services. Be an ambassador for that information, and stay connected to local community organizations.

If you are a Dreamer affected by the repeal of the DACA, Feldman says it's important to remember a few key things:

1. If you are already submitted your DACA application, the request is still being processed as usual.

3. "Don't panic," Feldman says. The government has said they'll first focus on deporting immigrants with criminal records, which excludes most DACA recipients due to the extensive background checks they undergo to receive deferment in the first place.

4. Should you need them, visit this helpful database to find legal services near you.

5. Read this community advisory for a more thorough legal breakdown of the DACA repeal.