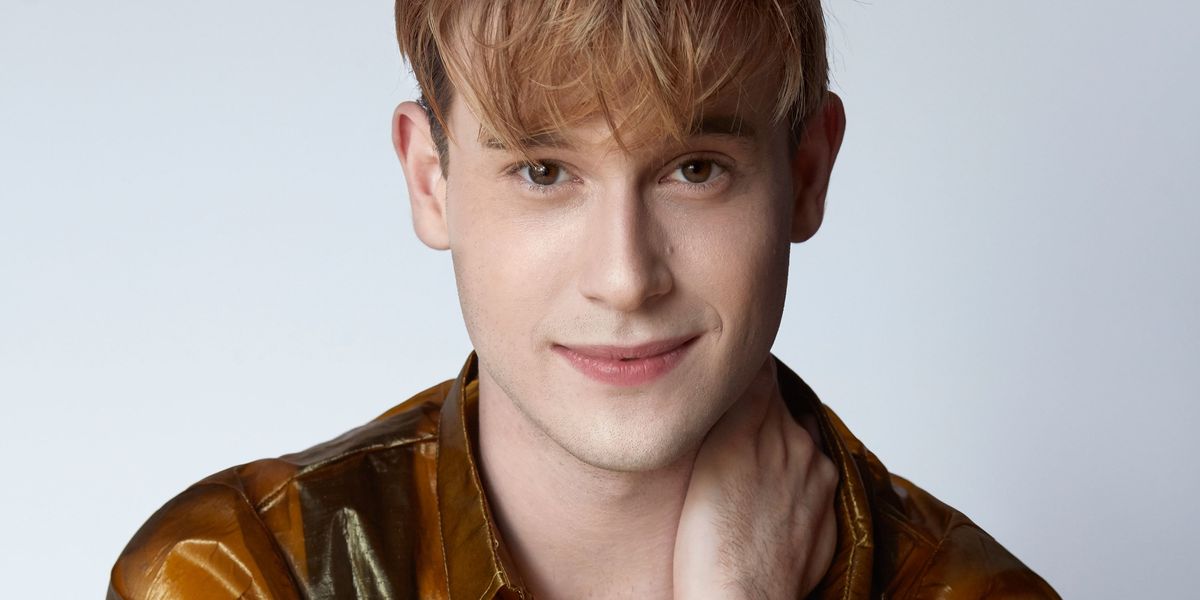 Tyler Henry: He'll Read You, But Not in the Way You'd Expect

It's not everyday you meet a medium. Well, if you do, then you're probably dead. Tyler Henry, the 22-year-old clairvoyant medium and host of the hit E! television series Hollywood Medium, is no stranger to the array of reactions one has upon discovering his unique abilities. Although many find the solace he's able to provide from his readings, that hasn't always been the case, especially in his formative years. From growing up in a Christian household in a small, conservative community, to reading some of Hollywood's biggest A-Listers like Kris Jenner, Allison Janney, and even high-profile figures like Olympian Gus Kenworthy, we caught up with Hollywood's go-to medium to talk about growing up gifted and what we can expect from the highly-anticipated third season of his hit TV show.

How old were you when you discovered your gift?

I grew up in a conservative Christian household in a conservative community, and we didn't really talk about spirituality or any of that growing up. This all happened when I went to bed one night in April 2006 — I was 10 — with this overwhelming knowingness that my grandmother was going to die. When I woke up, I just knew she was going to pass. I went crying to my mom, and I kept telling her we had to say goodbye, and just as we were leaving the house, her phone rang and when she answered, we found out that my grandma passed.

What was it like growing up with this gift?

My mom was obviously the first to know. It took me awhile to start sharing this with other kids. Between 10 and 13, I would start picking up on these impressions. I would start having dreams of these random people, people that I didn't know. One day I asked my friends if they knew someone named Sal and would describe this person and one of them was like, "Oh my god, that was my uncle." It was as if I was recollecting memories, but I relayed what I saw and felt and people from there on out would start validating it.

How open were you about it?

Back then it was tricky, but also back then I would share this information as I was just recollecting memories. Anyone who was in my life longer than a couple of days knew about me and what I could do. Back then, I was open about it, and I was just sticking to my truth. I was just open about sharing what I was experiencing. I didn't realize how abnormal it was seen until I started taking note of some people's reactions.

What were their reactions?

It was fear; they were scared. They were frightened by what it could mean. It's so personal and private, and I dealt with a lot of religious opposition.

"My sixth sense uses all my other five senses, and I use them all to build on the feeling I get when doing a reading."

When I was 10, I told a friend of mine, and she told her mom, and her mom was a very religious woman and a prominent figure in the Christian community in which I grew up, and this woman held a prayer circle for me — to pray for my soul. I was only 10 years old. That was really difficult. At 10, you don't even have an identity; you don't know who you are or what you want to be, so to have a group of people praying for your soul — and to be saved — was really hard for me. It took a lot of time, but after a while, I grew thick skin. But now, of course, I find that I get overall positive reactions, because people feel validated, or healed, or have a sense of relief.

I think there are a lot of misconceptions about what I do: I don't see dead people walking around. Most of the time, I don't even know what the person looks like. When I do a reading, it's like someone else's consciousness lays over my own. The more I relax and open myself up, the easier it is to tune into someone else's thoughts and feelings which overlay my own. My sixth sense uses all my other five senses, and I use them all to build on the feeling I get when doing a reading. I use all the stimuli in my body on a very subtle level, and then I find a way to deliver what I'm feeling in a way that the client can validate.

Shirt and Pants by Gucci

Do you ever get those who've passed try to contact you spontaneously? Do they try to reach someone you're near, physically, and use you as a conduit to relay that message?

Absolutely. I do live events where there's someone in the audience that someone who's crossed over wants to reach out to. One time, I went to a supermarket and started to get these feelings. I was walking down an aisle, and there was a woman in the same aisle, and I got a feeling about this woman's father. I had a sensation in my throat and I kept hearing, "I love you, I love you, I love you," so I approached this woman and explained to her that I was a medium and I told her I felt this choking sensation. She broke down in the middle of the aisle because her father died of throat cancer. And when he came through, he validated, one last time, that he loved her. When she made this realization, she broke down crying. These experiences can be very intense, and I realized that there has to be a time and a place for readings, especially readings like this. Not everyone is prepared or in the right state of mind to experience things like this randomly.

"I would absolutely love to sit down with Lana Del Rey."

What do you tell skeptics?

I find that obviously everyone has a wide range of beliefs. If I wasn't a medium, I would be skeptical. But I see the validation in what I do everyday, so I know what I do is real. And I know that there are those who are cynical, especially of one who is in the public eye, so for me it's important to differentiate between skepticism and cynicism. For skeptics, they're open to conversation and I can talk with them. With cynics, I really can't do that because they already have their minds made up. I try to work with people I can work with. I know it's not for everyone and all I want to do is help people.

Any celebrities that you haven't read yet on your show that you would just love to sit down with?

What can we expect from the upcoming season of Hollywood Medium?