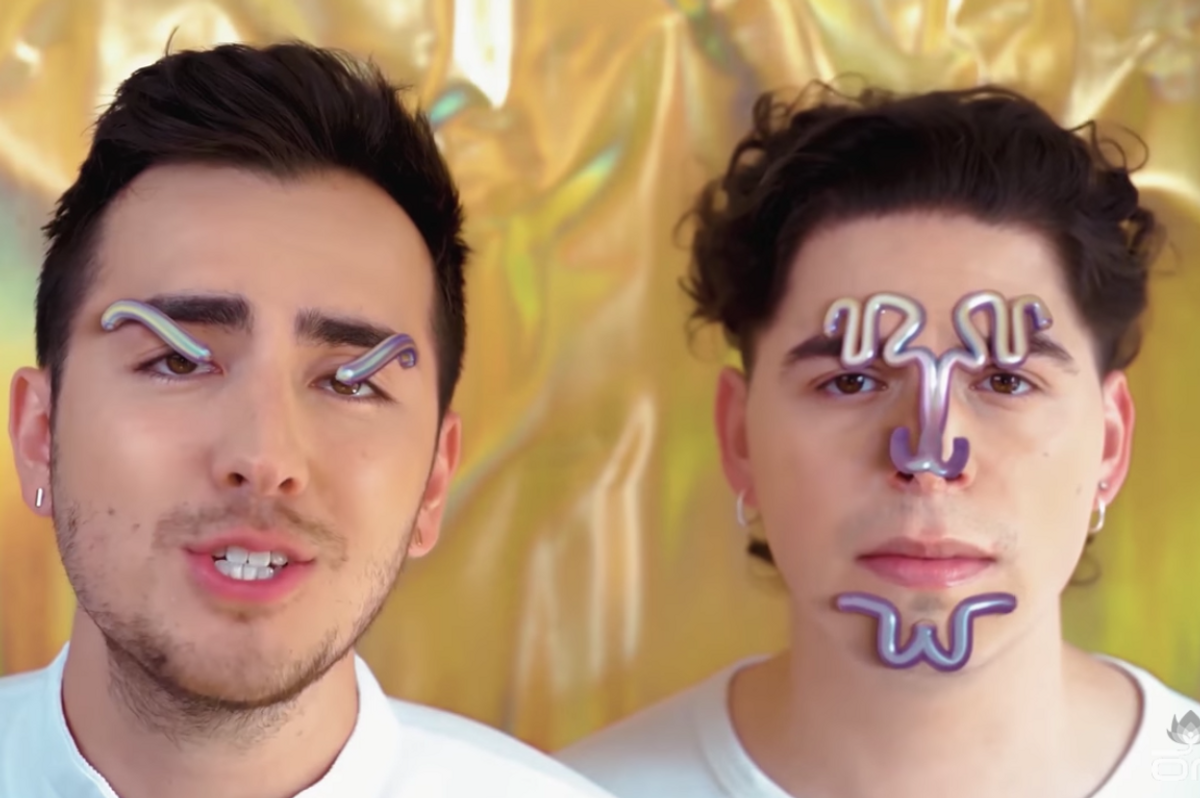 Pop band TWINKIDS makes baroque, sonically-pleasing music that is influenced by 1970s and '80s Japanese pop. Contrary to typical pop music, which often relays the rush of adrenaline that accompanies infatuation or new love, the duo, comprised of Gene Fukui and Matt Young, delve into their own flaws and mistakes.

Their video for their newest single, "I'm Sorry," is dreamy and delicate with a soaring hook, though the lyrics are darker, exploring "the ways we manipulate people without being able to control it and hiding behind apologies we don't really mean." In the video, the duo move between various glossy, brightly-colored backgrounds as 3-D computer-generated lines form on their faces courtesy of e-makeup artist Ines Marzat. It's one of the few videos of theirs that prominently features their faces, and they wanted to create something uplifting and bright to accompany their music, which they feel makes darker, more serious messages palatable to their listeners.

PAPER chatted with them about their recent tour with Matt & Kim, using pop music as a subversive tool, and creating the visuals for their new music video.

You recently went on tour with Matt & Kim. How was it?

Gene: Oh my God, it was amazing. They're the two warmest, most welcoming people. That was the first time we've ever been out on the road, and I don't think we could have asked for a better experience. The venues were amazing and their fans were so welcoming.

Matt: They were just so warm and welcoming and they hand picked us to be on this tour out of nowhere, so it was really flattering, and a huge honor.

I saw Matt and Kim in my hometown when they came to my high school and they were so enthusiastic. My friends and I were like, "We're going to do whatever it takes to get their attention. We're going to make them notice us." They finally said, "We see you in the back dancing!" and it made our year!

Gene: That sounds like them. It's like no show I've ever seen before. That's why they have such a dedicated fan base. They really care about their fans and see those people in the audience. They build a sense of community every time they play. Few bands can pull that off as well as they can.

This was your first tour. Was there a learning curve?

Gene: For sure, I mean we'd been gigging for a long time so I don't think we felt that nervous about the performance itself, but being in such a large space, the way that things operate is different than smaller venues. And another big thing is when we're playing in LA, the people who come out to see us are more or less there to see us, but with these gigs, it felt more like we had to win the crowd over, which meant tweaking the order of songs based on how audiences reacted. Even the things we would say in between songs was a huge thing that we learned about.

Matt: The set was only 20 minutes, so we were always thinking, "How can we get these people who didn't come here to see us to know us as people and know what our music and our sounds are about?" And just playing a show every night is so exhausting, so figuring out how to build up our stamina was really important. We were driving ourselves during the whole tour, out of a four person car with all of our gear stacked up.

I was reading that your work is influenced by Japanese culture.

Gene: I was born and raised in Tokyo, so I naturally I absorbed so much J-pop even though that wasn't necessarily what I was into at that time. I moved to the States for college and I started to appreciate a lot of 70s and 80s Japanese pop which I turned Matt onto. It's very technical although it's very pop-y and that's something we've both always wanted to do.

Matt: Yeah definitely Gene's background growing up there is super big in our project. We were just talking about this yesterday. I went to school for classical piano and that was mostly the type of music I was doing my whole life and then when I was 12 or 13, I started writing songs and producing a little bit on my own. It's a perfect intersection of our interests because J-pop is super neurotic, which is Gene's thing, and it has this sort of bittersweet sound, which we're really interested in. The harmonies are much more daring than so much American pop music now. So when I started listening to the recordings, I had never really heard music like this. Especially for the song, I feel like it's very influenced by that 70s/ 80s era of J-pop and it's kind of about making these harmonies a little more complicated than what you might hear in American pop music.

Pop music gets a bad reputation as static and vapid, when really the production behind pop music is very complex and it can mean different things in different contexts.

Matt: Yeah, absolutely that's like the goal, right, to kind of crate music that pushes boundaries and has that depth, but also has a catchy melody that anyone can relate to.

That's the best part of pop music — the universality, embracing the idea of making music for everyone.

Matt: It's like this cool game of, "How can I trick the person listening into swallowing the weird idea that I've thrown in here? How can I make a song catchy while also changing what's possible in pop music?"

I feel that about Perfume Genius too. Like those songs are pop-y and gorgeous but also very subversive.

Matt: Yeah that's the type of music Gene and I are interested in, artist who are exactly doing that.

How did you come up with the idea for the "I'm Sorry" video?

Matt: Well Dakota [Light-Smith], who directed the video, has done all of our album and single artwork since we started releasing music. She is really interested in visual art from Japan from the 70s and 80's. Without having to discuss with her, she has always understood what we wanted visually. Before we started working with her, that's something that Gene and I struggled with because that's not really how our brains work. We understand our sound pretty well, but we were having trouble pairing visuals with our music. But she just totally got it from the beginning, so we found the other artist Ines Alpha and we sent her an iPhone video once, and she did similar 3d makeup on us for our Instagram. When we decided to make a video for this song, I felt like we had to work with Ines and then Dakota was the one would oversee the whole project. We wanted it to be this moving portrait of us, because we never put out a video before and shown our faces in motion. The two of them are so closely related to what our music sounds like.

How does the use of color relate to your sound or song?

Gene: Yeah that was all Dakota. If you look at the cover art for our last single and for this single, the color scheme is very light, but it's not neon or too abrasive. It's a lot lighter than what you've usually seen. For a while we were going in a lot in the black and white direction and dark clothing, but we felt like that didn't feel like how we sound. We're more sparkly and harmonic, so those colors are more of an extension of Dakota's work.

Matt: Yeah, I think what we talked about a lot with her is this idea of trying to move into a realm with our sound that was more sparkly, and pretty and glittery and her interpretation of that was to use these bright colors that weren't necessarily neon, but more textural. That's what she brought with our artwork. That's what we described to her with the sounds and the colors. We didn't use a green screen for those colors. Dakota built a dolly that we were moving on. We used pieces of fabric, and I think that really comes through because the video feels really physical but then pushing that against what was the animation over our faces. I really like the tension over those two things because I do think they look disparate, but they're within the same color world.I like how that came out- and we're kind of similar because we make all the music ourselves in this DIY way, but we're also really sparkly and metallic and shiny, so it's a similar tension in the video as there is with our process.