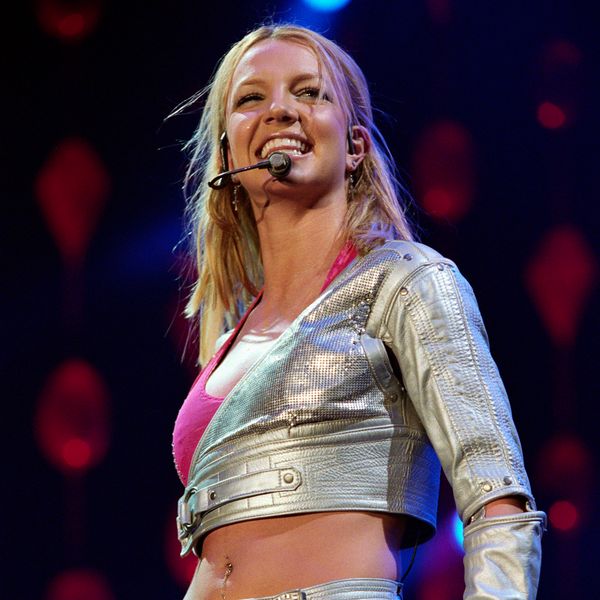 The Perfect Inauthenticity of 'Oops!... I Did It Again'

At the turn of the 21st century, Britney Spears was everywhere. One of the most exposed figures of the time, her every move was dissected and discussed ad nauseam by a ravenous media. Yet somehow, Spears remained an enigma. Her celebrity hinged on dizzying contradictions: Southern Christian values and sexual liberation; conservative politics and a huge gay fan base; virginal purity and licentiousness. Everyone wanted to know: "Who is Britney Spears?" Was she a role model or an example of everything wrong in the world?

We may never learn the answer. Spears' musical output reinforces her unknowable public persona, an integral part of her performed identity. To perform one's identity is to enact a particular, intentional public face — the clothes we wear, the expressions we use, or in the case of a pop star, the music we make. But that doesn't mean identities can't change. As the cultural theorist Stuart Hall has argued, "Instead of thinking of identity as an already accomplished fact... we should think, instead, of identity as a 'production,' which is never complete, always in process." None of us is only one thing, and our identities are in constant flux, adjusting to our circumstances and to the need to fit in or represent ourselves as we want to be perceived. In Spears' music, she exposes this plastic nature of identity.

Related | A Britney Spears Pop-Up Is Coming to LA

But how does the music itself function in obscuring the "real" Spears from her public avatar? "Oops!... I Did it Again" (2000) makes an ideal track for exploring the specifically musical construction of identity. Composed by Max Martin and Rami Yacoub, "Oops!" is now hailed as a pop masterpiece. But in large part because of Spears' perceived lack of "authenticity," the song was met with critical rejection upon its release. The Los Angeles Times dismissed "Oops!" as "hollow and fake," appealing only to young ears, since "Spears's [sic] sophomore collection has all the brass and burble millennial adolescents expect from their ear candy. More jaded listeners will hear the same slick soul-pop, metronomic beats and overwrought balladry as before, but, really, who cares what they think?" The fiercest invective came from the A.V. Club, in a blistering critique worth quoting in full:

"Processed, airbrushed, (allegedly) augmented, and bleached of anything resembling charisma, Spears is a true cipher, a dress-up doll programmed to satisfy as many different fans and fantasies as possible. So it's no surprise that... "Oops!... I Did It Again" is a joyless bit of redundant, obvious, competent cheese, recycling itself at every turn and soliciting songwriting from... soulless hacks... and assorted Swedes."

What did these critics want from Spears? At the turn of the millennium, Britney Spears embodied what music journalist Ann Powers describes as "a seismic shift in American culture — not toward the cultivated rawness of rock and roll, but away from it, into an era dominated by new technologies that throw into question the very nature of the authentic." Highbrow music publications approached the songwriter's creations with a mixture of suspicion and derision — often laced with language of sexism and ageism — and failed to recognize that Spears represented a new kind of pop star — a cipher, a mirror for our collective desires and anxieties.

Spears' anti-authenticity was a response to a pop industry reeling from the rise of Napster and the resulting precipitous decline in the earning power of music. Artists had to transform themselves into what communications scholar Leslie M. Meier calls "artist-brands." In the twenty first century, pop artists have to sell themselves — the more an artist's brand refracts and engages different identities, the more the artist can command attention and profits. For some, the celebrity-first music economy may be creatively stifling. For Jay Z it provides both lyrical inspiration and an investment opportunity: "I'm not a businessman; I'm a business, man!" But either way, if you're an aspiring pop star, mass marketing your image is non-optional. Rather than seeing in Spears a "dress-up doll programmed to satisfy as many different fans and fantasies as possible," we find an ingenious artist-brand designed to generate controversy and confrontation. Rather than hearing in "Oops!" a "joyless" tune composed by "soulless hacks... and assorted Swedes," we recognize an accomplished work of timbral variation, harmonic ambiguity and contrapuntal daring, devised by a Swedish emigré named Max Martin who would become one of the most successful songwriters of our time.

"Oops!" illustrates how Spears keeps listeners an ear's-length away from her "real" self, because every musical element in the track explodes the very notion of the singer having any "real" self at all. The contradictions begin in the chorus with the childlike "Oops!... I did it again," followed by the claim, "I'm not that innocent." Which is it? The music provides no answers. Spears' vocal timbre alternates between knowing maturity and naïve wonder; the harmonic progression in the chorus waffles between major and minor; and in the piece's masterstroke, the final chorus launches into counterpoint, an age-old technique in which separate melodies are sung against each other.

The crowning, confounding moment of "Oops!" arrives toward the end of the song, after Spears has growled and purred her way through two verses, two choruses, and a delightfully dated bridge section that references the doomed romance in the film Titanic (1998). Then, at 2:29, something surprising occurs. The song seems to return to the chorus, but it's not the same chorus we have heard before.

While the original chorus started on the downbeat, this altered version shifts the lyric "Oops" to the second beat of the measure. The lyrics are also varied slightly, from "Oops, I did it again/ I played with your heart/ Got lost in the game" to "Oops, I did it again/ To your heart/ Got lost in this game." The melody unfolds differently as well, holding to the general contour of the original chorus but landing on alternate pitches. The overall effect gives listeners something new yet recognizable at once, creating musical variation while still delivering the song's most familiar section.

Counterpoint represents one of music's unique artistic properties. The human brain is unable to comprehend numerous monologues at once — something you can test by taking the middle seat on a plane and trying to eavesdrop simultaneously on the people sitting on either side of, in front of and behind you. We can only comprehend one speaking voice at a time, and we tune the others out in order to do so. Melody is a different game, however. When Spears sings the alternate chorus and the original chorus at the end of "Oops!," we not only hear each individual melody, but we also hear a third part: the new melody created by combining the two. We cannot focus on just one melody; we can only hear them in the aggregate. This is an effective metaphor for identity itself, since the elements that make up our identities may be indivisible, but we are always greater than the sum of their parts.

Spears may not be the "authentic" star that certain music critics and fans want her to be, but authenticity is not in the nature or the formula of modern pop. For musicologist Simon Frith, what distinguishes pop from other genres is that it avoids individual emotion and is instead "designed for public use." The more mass appeal, the more success a pop song has, and that means sounding a prismatic idea of identity. The music in "Oops!" never allows listeners to locate an authentic Britney. But maybe that is okay. Its interwoven melodies will live on long past our pent-up anxieties over the unanswerable question, "Who is Britney Spears?"

Adapted from Switched On Pop: How Popular Music Works, and Why It Matters, by Nate Sloan and Charlie Harding, co-hosts of Vox.com's popular music podcast Switched On Pop. Available now from Oxford University Press.