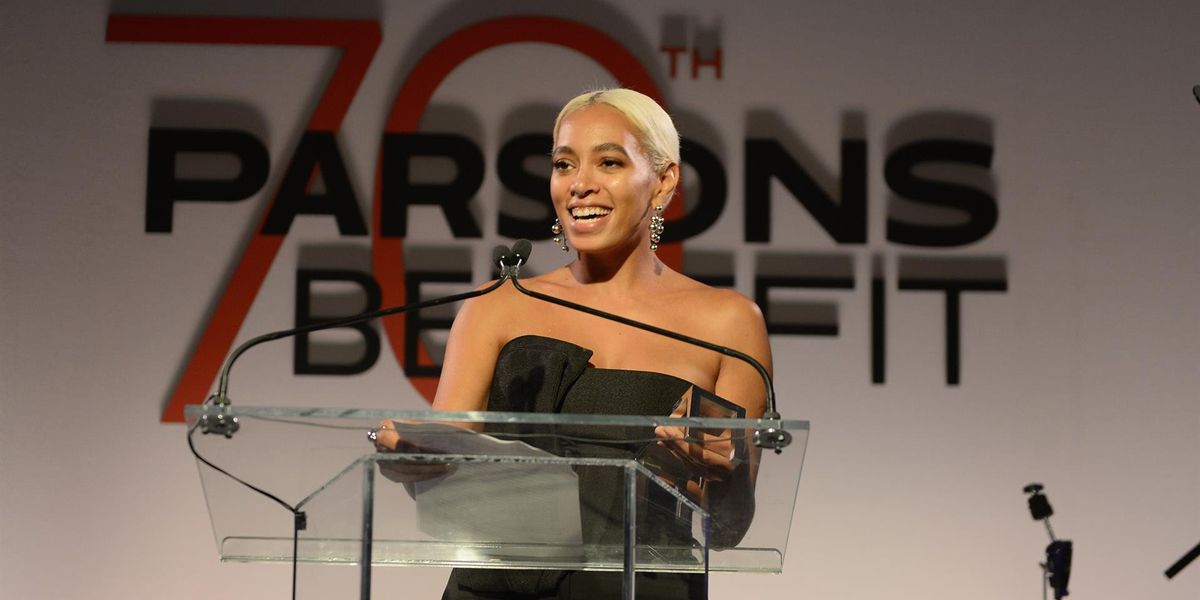 Last night, at the 70th annual Parsons benefit, The New School honored Grammy Award-winning singer, style icon, visual artist, and social media queen Solange Knowles for her contributions to the fashion world as well as to education and charity. Marco Bizzarri, the President and CEO of Gucci, and José Nevers, the CEO and Founder of Farfetch, were also honored at the event, which took place at Chelsea Piers's Pier 60. The benefit raised $2.26 million for scholarships at The New School. Previous winners of the award include Rihanna, Donna Karan, Arianna Huffington, Jason Wu, and Sarah Jessica Parker.

Pharrell, Missy Elliott, and Erykah Badu all spoke via pre-recorded video message, and Vince Staples gave remarks about Solange's importance as a musician and fashion icon. He said she, "has the perfect balance of integrity and compassion and just being aware of the world around her." Solange thanked him today on Instagram for, "shaking up the room and the world," and "for uplifting black women."

Solange's avant garde black jumpsuit was created by 2017 Parsons graduate Shanel Camphell. Solange praised her designs on Instagram, saying, "Students like Shanel Campbell, who I wore last night, who are truly continuing to shape and mold the way we see the world, being unafraid, disruptive, working through circumstances and pressures and fears unknown to us....and leading the way as the new faces of fashion music art and design."

In her acceptance speech, Solange thanked the black women who had influenced her and who had reminded her that, "avant-garde was not just reserved for the women society told [her] it was reserved for." She also spoke about the first time she felt inspired to champion her distinct and unique personal style, when she bought capri pants that she loved as a child but was made fun of for wearing.

Many of Solange's friends attended the event, including musicians Kelela and Dev Hynes, as well as actress and author La La Anthony. Solange posted photos of herself dancing on top of a hummer alongside Amber Venerable, which was truly friendship goals.