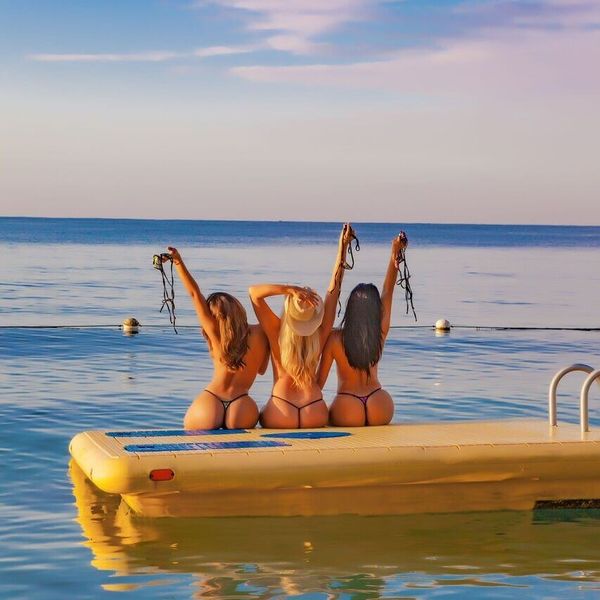 You Should Really Go to a Sex Resort

"You know in Jamaica there's only sex, sea and sun and I can give you all three," my driver asserted with a wink as I, already soggy from the Jamaican humidity, boarded his bus en route to Hedonism II, one of the world's leading sex resorts. I had arrived.

Mona Lisa with her breasts exposed is a confronting image at the best of times, but to walk into a pillared, open-air resort foyer with the reimagined Leonardo Da Vinci classic proudly occupying the space overhead certainly sets the tone for the experience in which you're about to partake. Hedonism II, a 40+ year-old sex resort that's a hit with guests and local gripe doesn't go easy on prudes. Even the most sexually-advanced among us might be shocked by the array of penises flapping in the wind as they waddle their way to the nude beach. Hedonism II promised an awakening, and an awakening I was delivered.

Situated in tourist hotspot, Jamaica's Negril, the resort is more appropriately described as an estate. The sprawling property boasts not only a private beach, but the amenities of a small, sexy village. They include — but are not limited to — a full-blown dance club, an open theatre/dining room, piano bar, nude pool/hot tub (with a built-in bar), a slutty costume shop, as well as all of that you would expect of luxury accommodation. Oh, and a full 50 Shades-style "playroom," where you can be whipped, chained and plugged at your leisure. It's worth mentioning the room comes complete with a ceiling and full-wall mirror and a sex-friendly shower, all of which make the prospect of "taking a night off" love-making feel like a cop-out because well, why go to the cinema only to not see a movie?

If you're hoping to soak in the best of Jamaica, Hedonism II isn't for you. It's for the sexual-adventurer, the relationship-rekindler and the escapist. For those who trudge through nine-to-fives, living for opportunities to let their freak flag fly, it's the ultimate refuge. There are costume parties, foam parties, and dance parties. According to Jermaine, our mutually boisterous and fastidious tour guide, guests will come for months at a time, Hedonism II serving as their vacation destination and second-home. It's easy to see why — the atmosphere is so impressively non-judgmental that it will bring out the hedonist in even the most conservative.

Which could quite honestly not have been more welcome. While I, a New Zealand-native living in liberal New York, have never felt more innocent than I did in my time spent at the resort, Hedonism II truly worked wonders on my ebbing and fluctuating self-esteem. After the initial shock, nudity was surprisingly easy to accustom to, and the ease and comfort with which women and men of all shapes and sizes strutted in at dinnertime in tiny thongs, or walked to the pool in the morning wearing nothing but sunscreen, was remarkably refreshing. I stopped worrying about my breasts' position on my chest, the shape of my stomach, the size of my butt. If I, a body positivity-preaching 20-something couldn't be content in my body, then how is the bellying middle-aged woman gearing herself up to go shirtless supposed to feel? Good sex — and in a larger sense, any venture — is about comfort and confidence, and we shouldn't be settling for anything less.

So my driver was wrong. Jamaica isn't all sun, sea and sex, but Hedonism II certainly is.