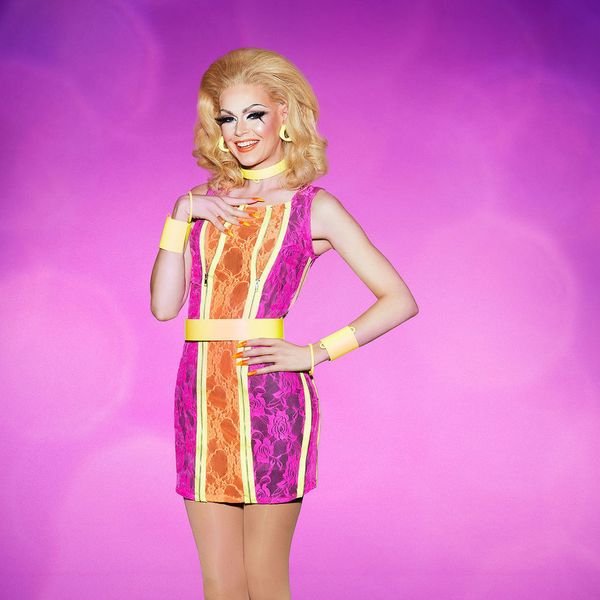 In case you didn't know that RuPaul's Drag Con is happening next month in Los Angeles, this week's episode of Drag Race was essentially a two-hour commercial for the upcoming convention — Ru truly is the queen of branding. The queens were split into groups and tasked with creating their own mini Drag Con panel, each centered around a part of drag. Eureka won for her team's body-centric panel, while The Vixe, Miz Cracker and Blair St. Clair's wig team didn't make the cut.

As the queens were judged on the runway, Blair opened up about how trauma had influenced her drag, revealing that she'd been raped at a college party and since then had tried to reclaim her lost innocence through her drag persona. Clair was eventually eliminated, but she's excited to use her newfound platform to reach others who are suffering.

The episode was filmed many months ago, and these past few months have been a really nice time for me to meditate and process and feel all the emotions that I needed to feel to get to today, and last night was a nice extra bit of closure that I didn't know that I needed. I'm really glad that I took that time to fully get over all the emotions I've been feeling in my life because the anticipation is over and I'm able to close that chapter now.

Did you feel that you needed to let that out in such a public way in order to move on from it?

I can't tell you exactly what I needed, but what I can say is that in the moment, I truly felt my heart speaking for me instead of my head, and you never really know when in life it's the right time to say something, but you can feel it. I just felt a weight hanging on me and I was finally ready to release that, and when that happened, I wasn't sure exactly how I was feeling, but I've taken a lot of time since then to really cope with it.

I found it very interesting that you talked about your drag as a reaction to your trauma and almost a subconscious way of processing it.

I do drag today because it's my theatrical outlet of expressing emotion and feeling, and being able to create a body of walking art. Part of that art and expression for me comes from my experiences, and one of those happens to be that assault I discussed. For quite a long time in my life I felt a little bit of my innocence had been stole from me, and without knowing it I've been searching to reclaim that innocence and find that beauty in it. I've always been trying to find daintiness or softness, and that's something I've always searched for because I felt like it was taken from me and I always incorporate that into Blair St. Clair.

We're obviously now in the era of #MeToo, and while it is largely a women's movement, men experience sexual assault every day. Do you think it's important that more men speak out about their experiences?

Frankly, I don't think it's a question of gender or race or sexual orientation, I don't think you can put anyone into a category or group. If you've experienced trauma in your life, whether that be sexual assault or harassment or bullying, it is important to talk about it and speak out and speak healing, no matter who you are or what you are. The first way that we as a nation, society and culture can begin to change is taking the change within you and finding the positivity in life and finding self-validation and moving past struggle and giving and accepting as much love as possible.

On Untucked, The Vixen seemed confident that she would be safe, while you and Miz Cracker were focused on preparing to lip sync. Do you think the outcome would have been different had you gone up against Miz Cracker?

When you are put into the bottom three, you have a statistic that's immediately against you: you are one of three options that could be lip syncing. If you think that you could be lip syncing, you should be thinking that you are and you should be fully prepared to lip sync, because that is your last chance to fight for your life and your journey in the competition. Whether you think you're gonna lip sync or not, it's important to remember that you could. No matter who I lip synced against, I wasn't thinking about them, I was thinking solely about me and what I could do to perform and represent me and show my heart to RuPaul.

What was your favorite moment of your time on Drag Race?

Oddly enough, it was when I left the stage after being eliminated, because after RuPaul said "sashay away," I walked back and all fo the girls were on the stage and I hugged each and every one of them, and most of them were crying of very emotional and upset, and I've never in my drag career experienced so much love and sisterhood in such a competitive world. So in that moment I realized that the competition wasn't a competition anymore and I had truly won, because I had won the hearts and the friendship of all of these men and sisters.

What has it been like seeing the response since the episode aired, and the outpouring of support from your fans and the Drag Race community?

It's been so humbling, I'm so incredibly blessed for the reaction of everyone and now the platform that I have. It's my job and duty now to really speak about my experiences and to be a voice and an advocate for so many people that are struggling just like I have. It's impossible to be a perfect human being, but we find beauty and love in our struggles and sharing that is what's so important.

I live for Monique Heart, but I don't think she'll be around for much longer.

We're gonna get a Miss Vanjie in every episode this season, aren't we? Season 11, here we come!

Miss Congeniality will definitely be either Vanjie or Blair.

I'm happy that these heterosexual actors like Drag Race, but does that mean they're qualified to be guest judges? Next!