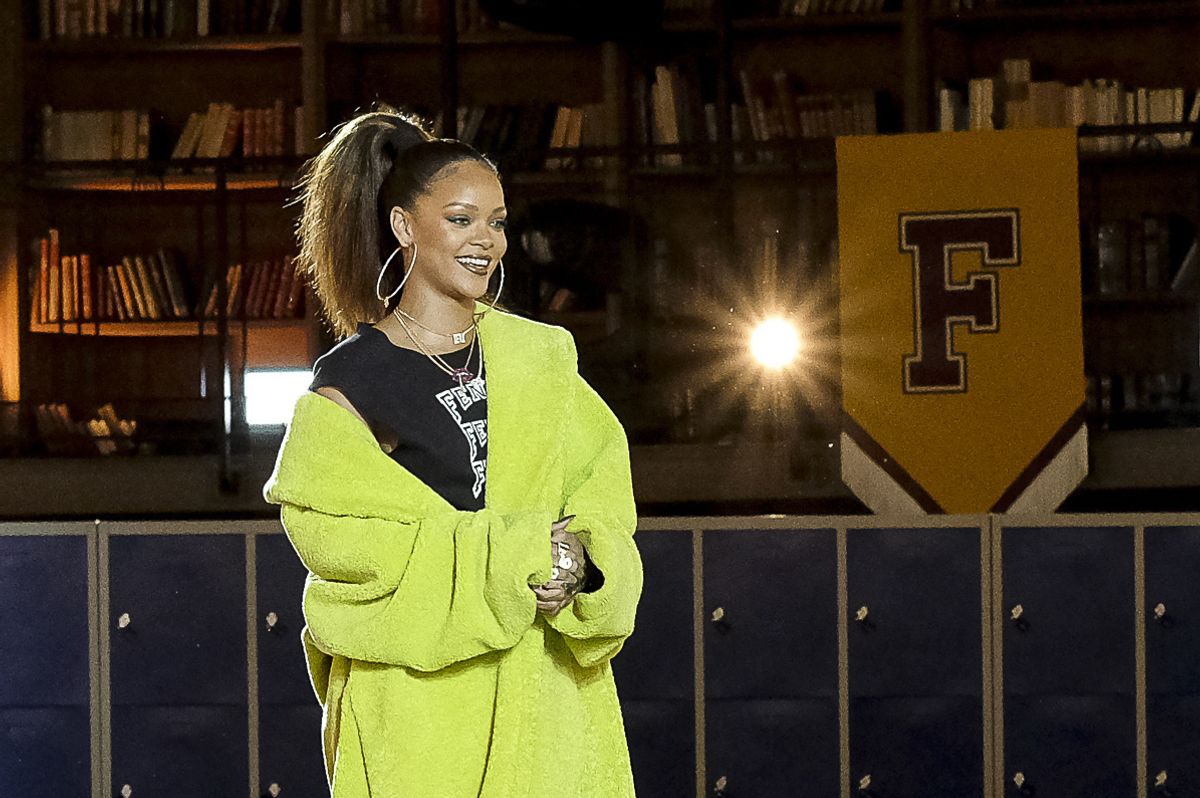 Rockets, Riri, and Louis at the Louvre: The Best Moments from Paris Fashion Week

And with that final Louis Vuitton look, the Fall 2017 Paris collections come to a close, as does fashion's twice a year marathon month. Paris did not disappoint when it came to fun, and blessedly distracting, fashion. From real live rocket ships to Rei Kawakubo, we recount the top ten moments of the week that was.

(Not So) Model Behavior

So true to my promise at #bofvoices that I would be a voice for any models, agents or all who see things wrong with this business I'm disappointed to come to Paris and hear that the usual suspects are up to the same tricks. I was very disturbed to hear from a number of girls this morning that yesterday at the Balenciaga casting Madia & Rami (serial abusers) held a casting in which they made over 150 girls wait in a stairwell told them they would have to stay over 3 hours to be seen and not to leave. In their usual fashion they shut the door went to lunch and turned off the lights, to the stairs leaving every girl with only the lights of their phones to see. Not only was this sadistic and cruel it was dangerous and left more than a few of the girls I spoke with traumatized. Most of the girls have asked to have their options for Balenciaga cancelled as well as Hermes and Ellie Saab who they also cast for because they refuse to be treated like animals. Balenciaga part of Kering it is a public company and these houses need to know what the people they hire are doing on their behalf before a well deserved law suit comes their way. On top of that I have heard from several agents, some of whom are black that they have received mandate from Lanvin that they do not want to be presented with women of color. And another big house is trying to sneak 15 year olds into paris! It's inconceivable to me that people have no regard for human decency or the lives and feelings of these girls, especially when too too many of these models are under the age of 18 and clearly not equipped to be here but god forbid well sacrifice anything or anyone for an exclusive right? If this behavior continues it's gonna be a long cold week in paris. Please keep sharing your stories with me and I will continue to to share them for you. It seems to be the only way we can force change and give the power back to you models and agents where it rightfully belongs. And I encourage any and all to share this post #watchthisspace
A post shared by james scully (@jamespscully) on Feb 27, 2017 at 10:40am PST

In a shot across the bow to the model-industrial complex, casting director James Scully took to instagram last week to air a passel of serious grievances about another casting team, Maida Gregori Boina and Rami Fernandes, who had, according to first person sources Scully cited, subjected models to abuses and poor working conditions, specifically at a Balenciaga casting the weekend before the Paris shows began, in addition to accusations of race quotas. The post went industry-viral and prompted Kering, the parent company of Balenciaga, to immediately drop the original casting team and issue a statement. Maida Gregori Boina has since countered with a statement in Business of Fashion calling Scully's allegations "…inaccurate and libelous."

To celebrate his 100th runway show (since his first in 1993), the Belgian designer Dries Van Noten cast his Fall 2017 show with the women who have most inspired him throughout the years, among them Carolyn Murphy, Nadja Auerman, Alek Wek and Liya Kebede, in a parade of gorgeous prints and signature blazers and trousers. It was an emotional who's who of the catwalk over the last 25 years and a lovely statement on the power of women of all ages and colors coming together in celebration of one of the most beloved and visionary designers of his generation.

God Bless Nicki Minaj for going full Li'lKim at the Haider Ackermann show last Saturday in Paris—top by Mugler, silver pastie by Agent Provacateur. Her recent public beef with rapper Remy Ma already feels like an afterthought given her jaw dropping looks during the Paris season—Minaj was also spotted front row at Balmain, H&M, and Rick Owens to name a few. If living well is the best revenge the Pinkprint artist is serving it hot hot hot.

All eyes will be on the infamously retiring designer Rei Kawakubo in May as the Metropolitan Museum presents Rei Kawakubo/Comme des Garçons: Art of the In-Between for its annual fashion exhibition. In advance of the show's highly anticipated opening, fashion insiders got a sneak peak in Paris of what to expect where Kawakubo made a very rare appearance (though remained silent throughout the brief presentation). The day before, Kawakubo had presented her fall collection for CDG which featured models in (usually) armless silhouettes wrought in unlikely materials such as packing foam, construction paper, and industrial woolens. For the designer who famously said that "creation can only come out of a certain kind of unhappiness" it was an emotional statement on the strictures and difficult future of fashion in chaotic and dispiriting times.

With the opening of an exhibition honoring the namesake designer at the Musée Bourdelle in Paris, designer Demna Gvsalia had the Balenciaga archives on his mind. After a few seasons at the helm now, he did his most ambitious mining of the original designer's groundbreaking silhouettes to powerful and chicly humorous effect. Pairing M. Balenciaga's austere, architectural lines with giant tote bags, a new Gvsalia signature, the resulting picture was one of a large couture-ish bubbles bobbing around a giant carpeted expanse. With a legacy so serious, it is refreshing to relax one of French fashion's most sacred of cows, cut keeping it chic.

The Library Is Open

RiRi channeled her high school bad girl in her latest collection for Fenty x Puma with models sashaying on top of reading tables at the très académique Richelieu-Louvois Library, though the March cover girl has been making the rounds of august institutions of learning, what with her acceptance of the Humanitarian Of The Year Award last week at Harvard. With pals Cara Delevingne, the Jonas brothers, and Future nodding their approval in the front row, the collection was RiRi at her bad-ass best—the singer says she was often sent home for reworking her drab school uniform to the chagrin of her teachers—and makes the case for the detention crowd as the best-dressed clique in school.

A highlight of the Paris fall collections for the last few years is the introduction of the finalists for the LVMH Prize, the luxury behemoth's annual competition for young design talent. With a top prize of 300,000 Euros, even just placement in the competition is tantamount to an Oscar nomination in Hollywood terms for designers and brands, some just barely out of school who now suddenly have an audience with Karl Lagerfeld and Anna Wintour, among other heavy weight judges. Spearheaded by Delphine Arnault, the french billionaire Bernard Arnault's eldest child, standouts include some names you may already recognize—Molly Goddard, the British designer who's signature crinolines and daffy, doll-like creations are a reliable hit of LFW, as well as Atlein, the buzzy, jersey-specific label of Antonin Tron who worked with Nicolas Ghesquière at Balenciaga. Past winners include Wales Bonner, Marques Almeida and Thomas Tait.

With the discovery of 7 new potentially habitable planets in recent weeks, it feels like the notion of escaping Earth is an ever more viable option. Leave it to zeitgeist maestro Karl Lagerfeld to manifest that feeling with an IRL shuttle blasting off at the end of another larger than life Chanel RTW show for Fall at the Grand Palais. With spaceman prints and iconic Chanel quilting in lunar silvers and iridescents, he took one seriously chic leap for womankind.

After six years at the helm, British designer Clare Waight Keller bid farewell to iconic French fashion label Chloé with a fall collection that exemplified the ineffable Frenchness the label is known for: boho prints, slouchy trousers and lacy baby-doll dresses. Waight Keller joins the ranks of Phoebe Philo and Stella McCartney, two other groundbreaking, female, and British (former) Chloé designers who left the brand better than they found it. In an era when designers come and go at a dizzying rate, her six year tenure feels downright epic, not to mention her ability to maintain and breezily update the Chloé girl, an icon in the French fashion imagination. Waight Keller's replacement is Natacha Ramsay-Levi, the long time right hand of Louis Vuitton designer, Nicolas Ghesquière, and the first French woman to helm the label in in nearly 30 years.

LV at the Louvre

One wonders the amount of red tape and insurance paperwork it would take to stage a fashion show at the Louvre of all places, but whatever it was the powerful Louis Vuitton show that closed the Paris collections proved it all worthwhile. With models pouring out of the steps of the Cour Marly in the Richelieu wing of the museum, among the dramatic horse statues of Guillaume Coustou for Louis XIV, Nicolas Ghesquière imagined an autumn of women in fabulously wasp waisted shearling jackets, slinky bias cut and lace intarsia dresses, as well as a new LV take on boucle tweed. To the sultry beat Frank Ocean's "Pyramids" it was a statement on the power of every day cool elevated to a high art.