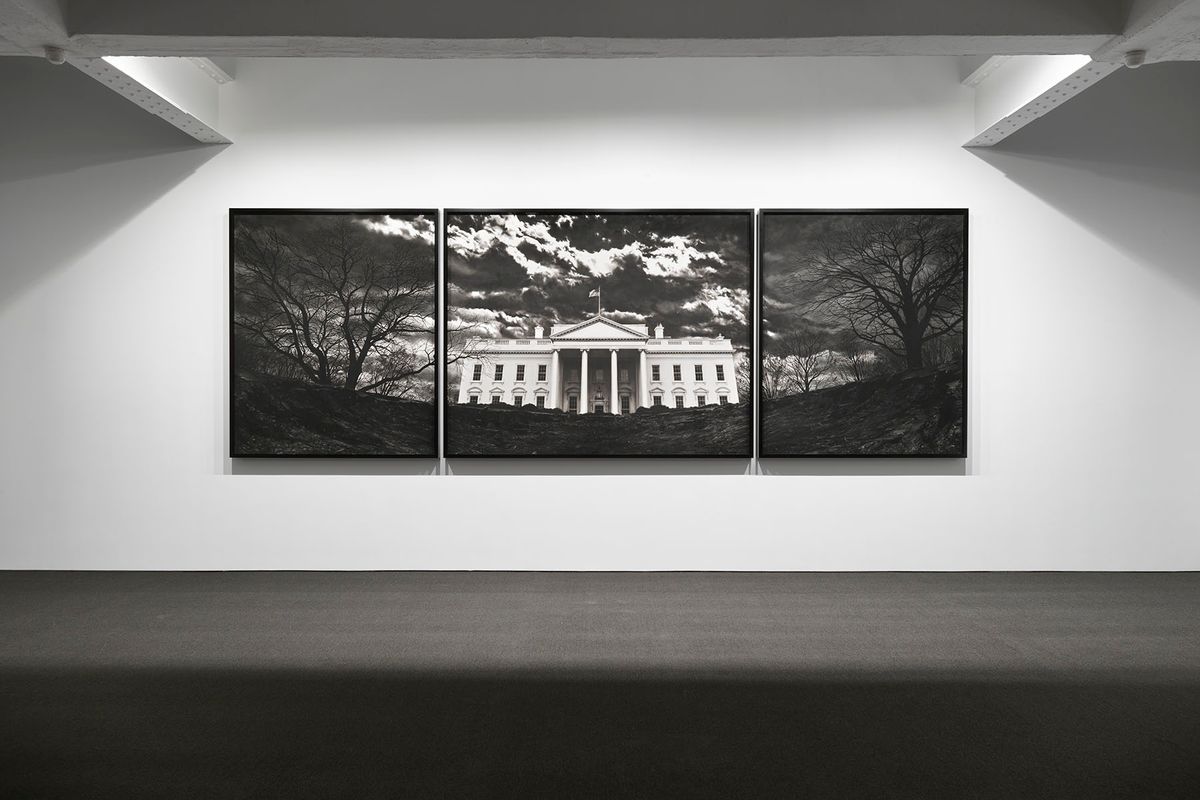 Robert Longo On Making Art In the Age of Trump

What is the underlying psychopathology of Donald Trump? It's a question that continues to stump most every observer and, in the absence of artificial technology or some algorithm that could give us the answer, the art world offers an outlet through which we can try to make sense of today's current state of affairs and our reactions to them. One titan of American art, Robert Longo, has for the past few years been clearly throttled into a fecund of creative frenzy by the current realpolitik of America in the 21st Century. Longo has long declared in past discourse that in making art, he aims "to try and understand our own contemporary situation through making images that are completely personal, while also addressing our social context."

RELATED | Artist Johan Wahlstrom On Being Popular With the MAGA Crowd

In Part I of Amerika, a show that ran earlier this spring in New York City at his long-time Metro Pictures Gallery in Chelsea, the artist unveiled some of his most astounding and provocative work yet. Walking into the Chelsea gallery this past May, it was hard not to be immediately overcome with the awe and grace of his large-scale work Death Star 2018. It was beyond overwhelming, this halo-like huge golden orb suspended from the ceiling, an exquisite golden globe of a sculpture studded with more than 40,000 copper and brass assault rifle bullets. It is the most poignant reaction-as-memorial to the mass shooting crisis in America that you will ever see. The show's piece-de-resistance however, was the work Untitled (White House) 2019, an astonishing and depressing triptych done in Longo's signature hyper-realistic charcoal drawing. It is a haunting rendering of the White House sinking into quicksand, serving as the most eloquent evocation of the despair many of us feel today. Taken together, these pieces can be seen as Robert Longo's urgent attempt to jolt America out of its stupor and wake up before life imitates art and America truly evolves into "Amerika!"

Part II of the series, entitled Fugitive Images, will debut at Metro Pictures next month and as his gallerist claims, will be a "further investigation into the politics of power, futility and aggression. And the fraught elements dominating the current American news cycle." I had the chance to visit Mr Longo at his famed Nolita studio to talk about his recent series and have an early sneak peek at Part II.

It is my belief that art historians will look back at this series of your work and define it as some of your most consequential. This is legacy work for sure.

All this work that I have been doing these past three years is a body of work I refer to as The Destroyer Cycle because until he is out of office, that is all I can call it.

So do you think he will go down in history as 45 with an asterisk?

He will go down as the worst president in history. The irony is that he followed the best president in history. What is most frightening about Trump is that he hates Obama so much. If he could, he would erase Obama's name from history. My work has always had a political edge to it. I grew up as an artist in the age of Reagan where he wouldn't even allow himself to say the word AIDS. But for me today, the sense of urgency is much more amplified. Hence this body of work referenced as The Destroyer Cycle.

I thought to myself, Wow this work would find the perfect home in that new flying saucer looking museum that architect Jean Nouvel just created called The New National Museum of Qatar. But no curator there in the Middle East would be brave enough to support such a confrontational piece of work. It's a shocking and haunting immersive short film.

Those rich autocrats in the Middle East building all these huge fancy museums. And I keep thinking to myself when the revolution comes, all the Western art they own is going to end up burnt or thrown into the Gulf.

If the Qataris were to be brave enough to include the piece in their museum, it would be the perfect poke in the eye of the Saudis who hate them.

Well, the work I do is nothing at all like some stainless steel bunny.

Now you're making me laugh -- although for sure not so much Jeff Koons. That said, would you ever direct another Hollywood film like you did with Johnny Mnenomic?

Doing that film was the most torturous experience and I don't know if I would ever put myself through that again. The best thing about doing that movie was my becoming close friends with the star of the film, Keanu Reeves. Whenever he is in New York he comes and hangs out here at the studio and we catch up over some cold beers. He's an incredible sweetheart.

Yes. As an artist I cannot tell them how to make art but I can mentor and help them in other ways. For instance, one of my assistants was preparing for a show with some gallery. They sent him a contract and I asked to see it and couldn't believe what they were demanding. So I looked it over and made some calls and helped sort it out. There is a core group of assistants here and the first test they get is their drawing ability. Mine is nothing at all like a Jeff Koons studio, which is paint by number.

I am now assuming you are not friends with Jeff Koons.

Well, then is there some tinge of envy going on here? After all, Koons just did sell one of those stainless steel rabbits you scoffed about for $91 million dollars!

And that's a scary thought. What is it going to be? Jeff Koons and everybody else? I pay my assistants really, really well and they only work from 11am to 6pm. So if they want to pursue their own art careers they have the time and the money.

You say drawing is your favorite form of self expression.

I think that if an artist can't draw then I am highly suspicious of them. Drawing is the purest form of observation. And I begun drawing with charcoal purely by accident around 2000 when I was looking around the studio to draw a heavy pencil and I didn't have any. I work in black and white (charcoal and paper) because for me, black and white just seems to express to me truth. And it's labor intensive.

And so genius and hyper-realistic. At first observation you think you are actually looking at a black and white photograph when in fact it is a charcoal drawing! Huge images! To view that epic work of the White House sinking in quicksand. It's astonishingly profound and realistic! The play on shadows is almost penumbra.

Nobody else uses charcoal. And the most interesting aspect to this work is that no other artist has ever used charcoal on such a grand scale.

And it's an archaic medium. Whereas other artists today are looking to embrace artificial intelligence in their work, you still resort to that well-worn tool -- charcoal.

Algorithms are opinions. It's not truth.

What was that catalyst that throttled the process here?

Trump coming into office really lit the fuse and the frustration. Watching Trump get elected was like watching Hitler get elected. We are now facing his version of that same diabolical narcissism. What we are dealing with are these certain powerful white men who realize they are losing control and this is their last hurrah. Trump is their last hurrah.