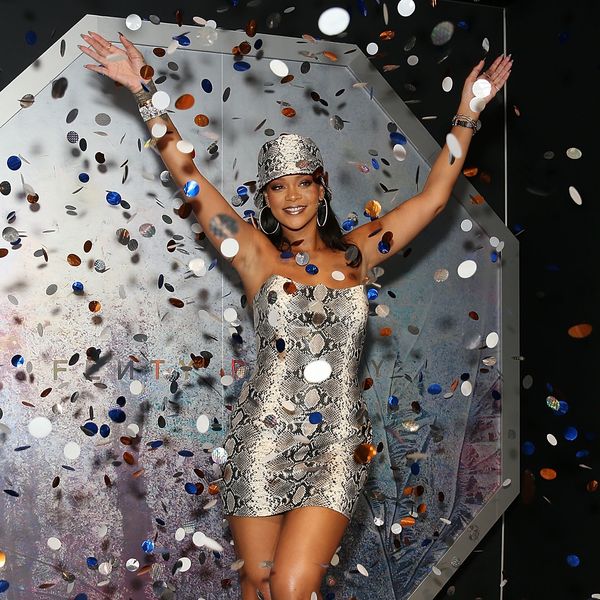 You don't have to be a part of Rihanna's navy to know that when the multi-hyphenate superstar keeps us waiting, it's with good reason. While fans anticipate new music, which is said to be on the way, Miss Robyn Rihanna Fenty is gearing up to drop not just a single, but also the single-most groundbreaking fashion house ever started by luxury conglomerate LVMH Moët Hennessy Louis Vuitton. And we have decided to stan.

Unveiling its plans to debut Fenty's first collection in Paris on May 22, the newly created maison is the first to be developed from scratch since Christian Lacroix in 1987. Leading the way in making luxury fashion inclusive, LVMH Chairman Bernard Arnault appointed Clare Waight Keller as the first female designer at Givenchy in 2017 and Maria Grazia Chiuri as artistic director of Dior in 2016. Just last year, Virgil Abloh became the first African-American to helm Louis Vuitton's menswear and now Rihanna is spearheading another movement.

As of this year, our very own @badgalriri is the first woman (and the first woman of color) to create a brand for LVMH, changing the conglomerate's tradition of reviving heritage brands to instead, create a new one — and with good reason.

Rihanna said in a statement today that "designing a line like this with LVMH is an incredibly special moment for us." She added, "Mr. Arnault has given me a unique opportunity to develop a fashion house in the luxury sector, with no artistic limits. I couldn't imagine a better partner both creatively and business-wise, and I'm ready for the world to see what we have built together."

The move should come as no surprise, either. After teaming up to release her Fenty Beauty Line that included 40 shades of foundation, the company racked in over $550 million in its first year and established Rihanna as a major force of championing inclusivity across her brands. "Everybody knows Rihanna as a wonderful singer, but through our partnership at Fenty Beauty, I discovered a true entrepreneur, a real C.E.O. and a terrific leader," Arnault said in a statement.

Debuting the maison's logo on Instagram today to her over 70 million followers, the mogul gave us a glimpse of her line which will include ready-to-wear, accessories, shoes and jewelry. As the person who's already given us foundations in every shade, blinding highlighters and a lingerie line that represents every size, race and gender identity, Fenty is sure to continue the reign that just won't let up.

@badgalriri on Instagram: “big day for the culture. thank you Mr.Arnault for believing in this little girl from the left side of an island, and for giving me the…”