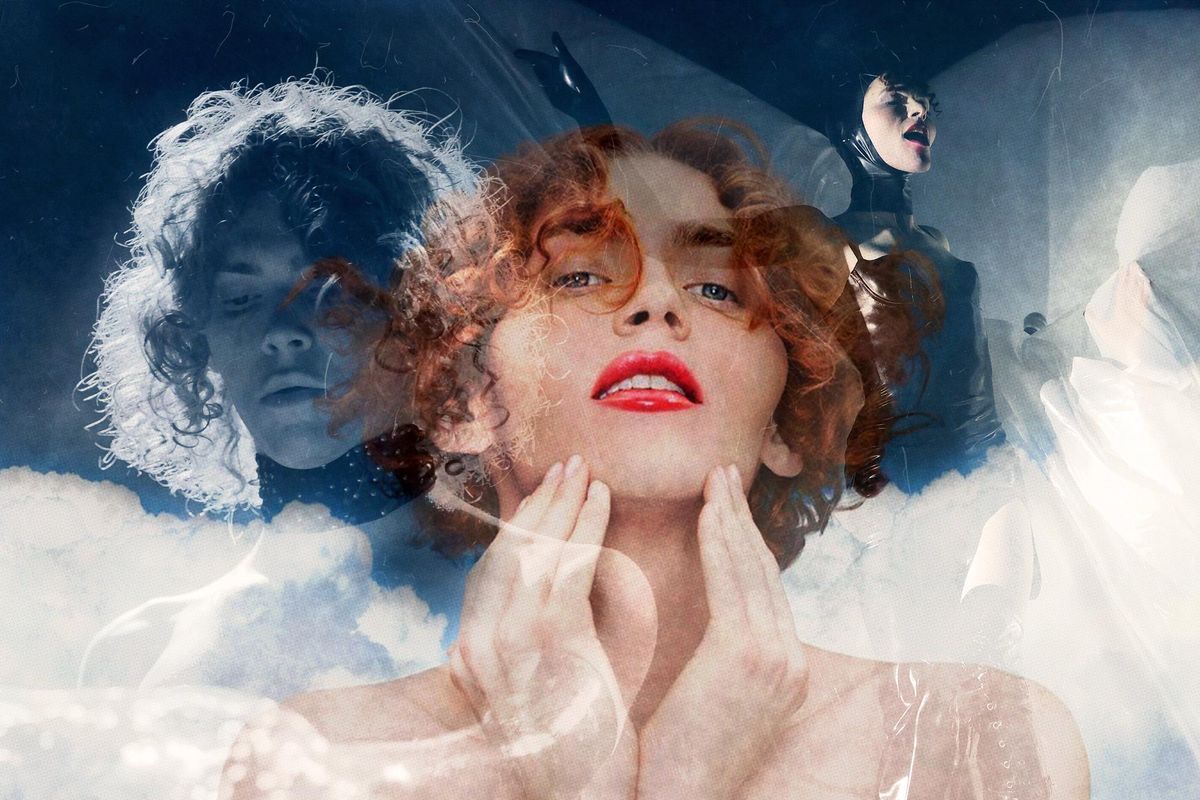 SOPHIE Was and Is the Future

To say SOPHIE's sudden death has left a void in the music world would be a gross understatement. In the span of a few singles, remixes and a groundbreaking debut album, the Scottish-born artist had ascended from innovative producer to trailblazing star to cultural icon. SOPHIE was changing the face of pop, as well as spawning entire new genres. Every new song was instantly iconic, habitually upping the ante. At 34, SOPHIE was just getting started.

A sonic alchemist, SOPHIE was capable of synthesizing all sorts of rubbers and metals from just a sine wave, so rich and vividly textured that you could feel them through your ears. There was a gestural quality to the way SOPHIE was able to bend and shape sound, plasticky squeals doing curly cues and thick viscous squelches oozing like slime all between the space of two kick drums. This tactile quality frequently carried over into the lyrics, as well ("Latex gloves, smack so hard/ PVC, I get so hard/ Platform shoes kick so hard/ Ponytail, yank so hard"), layering a mental slide show of everyday items over top of SOPHIE's hyperreal soundscape.

A deft auditory sculptor, SOPHIE was even more skilled at distilling ideas down to their purest form. Even at the artist's most indulgent and experimental, there was seldom any clutter in the mix: just a few synth parts, percussion and maybe a vocal if SOPHIE felt like it. SOPHIE put just as much thought into the negative space as SOPHIE did constructing the positive. It was a minimalist mindset with a maximalist effect.

The phrase, "cultural reset," often gets thrown around rather liberally, but when "BIPP" arrived in 2013, the music world shifted around it. A song best described by its own artwork — a digitally rendered royal blue and bubblegum pink water slide set against a stark white void — "BIPP" was cartoonish yet sterile, elastic rubber band kicks and helium soaked synths juxtaposed against an artificial vocal simulacrum singing "I can make you feel better" with a suggestive innocence. Truly no one had heard anything like it at the time, and everyone was instantly fascinated by the enigmatic producer responsible.

The fact "BIPP" was readily recognizable as pop made its experimental, hyperreal aesthetics all the more subversive. It marked a turning point where even the most snobbish hipsters and indie music blogs began to take the genre more seriously. Being commercial could be cool. You didn't have to pretend that you were above a Britney Spears track; there was merit to a Max Martin-produced bop as there was to a Radiohead song. Soon hundreds of bedroom producers were trying their best to emulate what SOPHIE and PC Music were already doing, flooding Soundcloud with pots-and-pans music, and bubblegum bass bootlegs in the process. This would go on to form the basis for what we now refer to as hyperpop.

SOPHIE's new vision wasn't purely theoretical. The experimental and pop-facing elements of SOPHIE's work often went hand-in-hand; for every Arca or Shygirl collab there was another with Madonna or Vince Staples, for every trap arms banger like "MSMSMSM" there was a five-part ambient remix of "Infatuation." SOPHIE brought a distinctive touch to each new collaboration, one that frequently led to career-defining moments for the other person in the room. Producing Charli XCX's Vroom Vroom EP proved pivotal for the singer, sending her down a path that's resulted in some of the most impeccable and forward-thinking pop to come out of the past decade. And as innovative and truly groundbreaking as SOPHIE's sound was, SOPHIE never lost sight of making sure people still actually danced on the dancefloor. ("Is the floor sticky or something?!")

No two SOPHIE live shows were the same. When SOPHIE came through town you never quite knew what to expect, but you could always count on it being some new level of mind-blowing. They ranged from a full-blown production, complete with multiple costume changes and tightly rehearsed choreography, to dark cerebral techno sets that went on freeform tangents and ended the night with more than a few grumbling about how SOPHIE didn't even play "LEMONADE." Other SOPHIE shows were arty hybrids of both formats, where SOPHIE might pose as a security guard for a drag queen SOPHIE'd hired to play a pre-recorded set, or assemble a gaggle of models lounging inside a mesh cage while the artist delicately twisted some knobs center stage.

SOPHIE also liked to wreak complete havoc. As a sophomore at NYU, I distinctly remember seeing SOPHIE open for Vic Mensa at the program board's annual secret show and cackling as the piercing high pitched teapot trill of "LOVE" caused unsuspecting members of the crowd to quickly cover their ears in surprised horror, confused as to whether or not the speakers had broken, while SOPHIE continued to tighten the screws. It was by far the most punk thing I'd ever seen an artist do — an act of auditory assault that tested listeners' tolerance for pain. Were you enough of a masochist to endure the dentist drill-like drone long enough to make it to the song twinkling music box pay off?

Related | Did You Know SOPHIE Produced These 10 Iconic Tracks?

Oil of Every Pearl's Un-Insides was a watershed moment for SOPHIE. An arrival in more ways than one, the album was the perfect marriage of the artist's pop-facing and experimental ethos. The uncanny balladry of songs like "Is it Cold In the Water?" and "Infatuation" butting up against the reconstituted post-dubstep death rattle of tracks like "Ponyboy" and "Faceshopping," every song felt like watching fireworks go off. The two often come together in the same fell swoop, like the way in which the record's epic nine-minute electro-charged closer "Whole New World/Pretend World" collapses in on itself in a hazy fog of dark ambience and ominous synths.

Oil of Every Pearl's Un-Insides also marked the first time that SOPHIE deliberately decided to center trans identity. Up until that point SOPHIE had remained largely anonymous, using proxies and shying away from press, which led to frequent misgendering and conversations surrounding the appropriation of female identity by cis-male artists. So when SOPHIE came out as trans in the "It's Okay to Cry" video, not only did it feel like a major turning point in the artist's career, but it was a moment where all of the disparate pieces started to fall into place and make sense. Transness is intrinsic to SOPHIE's work. SOPHIE explores the mutability of identity on "Faceshopping," dives into gender euphoria on "Immaterial" and "Whole New World/Pretend World," as well as speaking to the queer anxiety that lies on the other side of that coin. "It's Okay to Cry," with all of its vulnerable sentimentality and triumphant balladry, felt like the perfect way for SOPHIE to make a formal introduction.

SOPHIE's importance as a visibly trans figure in pop culture cannot be overstated. A critically revered producer working with some of pop's biggest titans, SOPHIE's influence and success showed that you didn't need to be beholden to binaries to make it far in life. SOPHIE understood the liberation that came with being trans and celebrated it as the utopic frame of mind that it is. SOPHIE's work awakened countless fans to their own trans feelings and resonated deeply across the queer community. SOPHIE never needed to explain herself and rarely did.

There is almost a cruel banality to SOPHIE's death: a slip and fall while taking in the full moon over Athens. It was unceremonious yet oddly poetic, both at odds and fully in line with the artist's contradictory mythos. Ironically SOPHIE died just a week after putting out the only ever officially sanctioned remix of "BIPP," by the very artists, Autechre, that inspired SOPHIE to get into music production in the first place and purchase an Elektron Monomachine. SOPHIE's near-virtuosic command of it would go on to become a signature sound. A full circle moment makes her untimely passing all the more tragic.

There was a part of me that didn't want to have to write this piece, because it meant acknowledging that SOPHIE is, in fact, gone. Even now, it still hurts to refer to SOPHIE in the past tense. It means coming to terms with the reality that there will never be another SOPHIE show to go to, that there now exists a finite amount of SOPHIE songs and we will never get to see what places SOPHIE would have gone say 10, maybe even fewer, years down the line. An artist frequently described as "being the future," it feels unfair to picture one without SOPHIE.

SOPHIE taught us that it's okay to cry, so for the time being I think I will.

At the request of SOPHIE's representatives, PAPER has refrained from referring to SOPHIE with gendered or nonbinary pronouns.