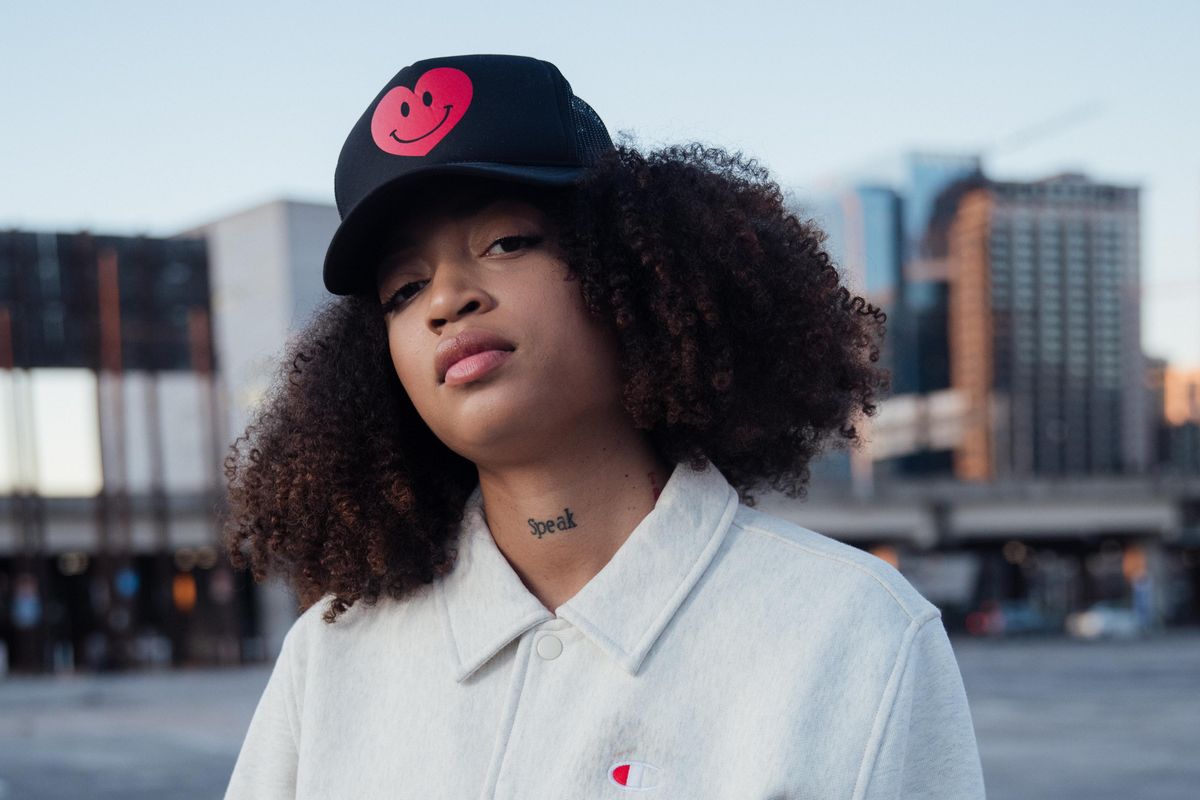 For the past four years, Ray Moon has been handling her career on her own terms. The artist (born: Rachel Marie Johnson) is an R&B-leaning rap artist of the smoothest kind.

On "Glowin," her most recent release, she finds her heart-melting pocket of melodies over a trap beat that would be impossible for anyone else to wrangle, but she does so with ease. A song about relieving herself from a toxic lover, Moon's "Glowin" music video features her girlfriend, Jadah Blue. She hasn't released much since she broke onto the scene in 2016 with "Everything Good," but each song drips with her own signature — one that's made her music impossible to resist.

"In order to glow you have to grow," Moon says of "Glowin," adding that "you have to experience relationships, friendships, financial hardship... life itself. So when you see growth you can recognize it and embrace your growth that we call 'Glowin.' I've been in the darkest places many times, so I am able to realize when I'm glowing and growing, I'm also able to see when someone is glowing, as well. To me, glowing means happiness. I want you to feel it and I want you to see it."

Moon is a relative newcomer to the industry. Raised in Queens, NY, she lost her father at a young age to a drug overdose. This event, and growing up in a rough area, would later come to shape her approach to music after she moved to Lawrenceville, Georgia at 15 years old. She started making music soon after, eventually relocating to Los Angeles where she currently resides now.

It's Black History Month, and the contributions of Black artists are as important than ever. They drive innovation across multiple genres and, in celebration of their creativity, Moon has created a playlist for PAPER that shouts out the queer and trans Black artists who deserve even more spotlight.

Here's Moon on why she picked each song, below.

I love the break up in the beat and even when she goes higher with her voice because she is naturally an undertone singer. Love how she's telling the one she once loved, " Thank you for your accusations." Clearly it made her stronger that she let that part of her go.

"Godspeed" makes me feel like I just went to heaven. It's so spiritual for me. It's like he's telling someone that even though they are not around him anymore physically, they will always have a special place with him.

This song definitely makes me wanna light some candles, run a bubble bath, open up a bottle of champagne and invite my girlfriend over for some fun.

First off, the beat choice and the way she rode it was crazy sick. It's so relatable, as well. Everyone has those moments when you're asking if you can come over or just simply pulling up.

I can tell she sat down and really wrote how she was feeling. A lot of times I like to drive in silence, so I can just think and have a moment to myself. I can tell when she's driving alone, the things she wrote in the song is what comes across her mind. It's dope that she made it into a song. Not a lot of people can pinpoint how they feel in music, it takes skill.

She's definitely coming at people that act like she doesn't know the "real" them. A lot of times people wear this mask as if their shit doesn't stink. I think it's dope she was able to call out the bullshit because if don't nobody know, I know.

When she hits that super melodic cadence before she even starts her insane hook, Jadah Blue intrigues me into wanting more Jadah Blue. This song talks about how she "thinks" she's falling for someone and the rush is giving her unexplainable feelings. Which is super relatable because those rushes can get scary. It's like, do I want to end up falling for this person? Or are we just going to have fun and see where fun leads us? Nobody wants to be a sidekick though... or do they?

Super melodic and relatable. Giving me a refreshing Caribbean vibe. We all have those ex-friends we don't fuck with anymore for multiple reasons. Music for me comes from experiences and the title, "Funny Friends," alone already gives me flashbacks. She killed it again.

Super relaxing and fun to listen to. I imagine listening to this going shopping or even hearing the beat in an elevator. It's a very friendly song. I think she snapped on this visual, as well. Fire.

Kaash is relatable to me in her melodic voice and beat choice. Even the way she talks about memories with loved ones. The song is super melodic and I love shit like that. Also, the title of the song is "Frank Ocean" and he's one of my favorite people. She's definitely making her mark in the industry. I look forward to working with Kaash soon.

Photo courtesy of The Nikon Icon