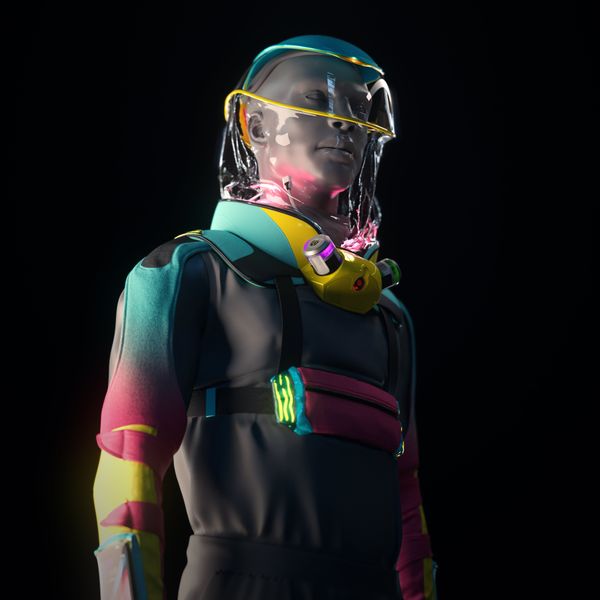 Is This Suit the Future of Rave Gear?

Long before they were a state-mandated necessity, face masks and ventilators were staples of rave fashion stretching all the way back to its origins in the 90s. Smeared with Vick's vaporub, face masks were originally used as a way to intensify the euphoria-inducing effects of ecstasy while rolling at the function. The aesthetic stuck and became a staple of the rave "look" for years to come with club kids taking inspiration from movies like Blade Runner, Robocop and Hackers as the scene took on a cyberpunk edge.

Fast forward a few decades and that dystopian vision of the future is now pretty much our present reality with it, ironically, feeling like the sweaty raves of yesterday may increasingly be a thing of the past with each passing day. With some experts projecting that we might not see a return to live music until fall 2021 at the earliest, the decimated nightlife industry has been scrambling for alternatives — everything from virtual festivals to reduced capacity at venuest.

While a majority of the industry has pivoted towards making digital spaces a viable option, LA creative studio, Production Club, is focusing their efforts on finding a more IRL solution. Putting their experience crafting live shows and installations for the likes of Skrillex, Zedd, SOPHIE and Grimes to the test, Production Club unveiled their concept for a rave-ready hazmat suit late last month as an answer to the problem posed by pandemic partying. Dubbed the Micrashell, the slick-looking suit looks like cross between the spacesuits from 2001: A Space Odyssey and the whimsical styling of The Fifth Element, rendered in bright blue, pink and yellow neon colors accented by glowing strips of lights that already look like it walked straight off the Ultra Music Fest grounds and straight into the movie Contagion.

The air-tight top-half design of the Micrashell is made so that the wearer is adequately protected from their surroundings while still offering a full-range of motion and easily use the bathroom (or even hook-up after the show) without having to be taken off. The concept also comes with a wide array of features such as cameras for your blind spots, a pocket for your phone that can recharge and control the suit, proximity voice communication, a direct audio feed from the DJ booth pumped into your helmet and even its own custom vape rig. The suit was also designed to be accessorized with a variety of patches, charms and additional pockets or pouches so that each wearer could add their own personal flair.

"The Micrashell was born from concern for our community, and concern about reckless social behavior," says Production Club's Head of Innovations Miguel Risueño. "After witnessing the events industry fall into an unprecedented recession, and seeing large groups of people ignore social distancing directives in order to go out and party, we felt obligated to address both issues and find a solution that benefited all."

Addressing the issue of accessibility and just who exactly the hi-tech suit would be geared toward, Risueño cites Production Club's roots. "Our original target audience for the suit is the people belonging to the nightlife and event industries. If you have ever gone to a concert, rave, party, conference, experiential event or art installation you are part of the original target audience." He goes on to add, "the rationale behind this is simple: this is the same audience Production Club has been catering successfully for years now — we understand it perfectly because we belong to it."

Still in the idea stages, Production Club envisions the Micrashell as being a solution to more problems than just corona, with the suit's beverage and vape canister system serving as an extra layer of protection against roofies, its color light communication system doubling as a way to alert others if you are being harassed and the helmet's adjustable soundsystem as a way to mitigate hearing loss caused by loud club speakers. With space in danger of becoming a luxury in a post-corona reality, Production Club sees the Micrashell as an alternative to cutting venue capacities by 30-40% which would result in higher ticket prices and access to cultural and entertainment spaces being cut off from those who can't afford it.

"For us the first step always is to create something we understand from the inside, we love and would use everyday, and then we expand from there," Risueño adds. "We consider Micrashell a "socialization" and "culture-driven" invention, and are confident in the design concept's adaptability to address the needs of other communities."