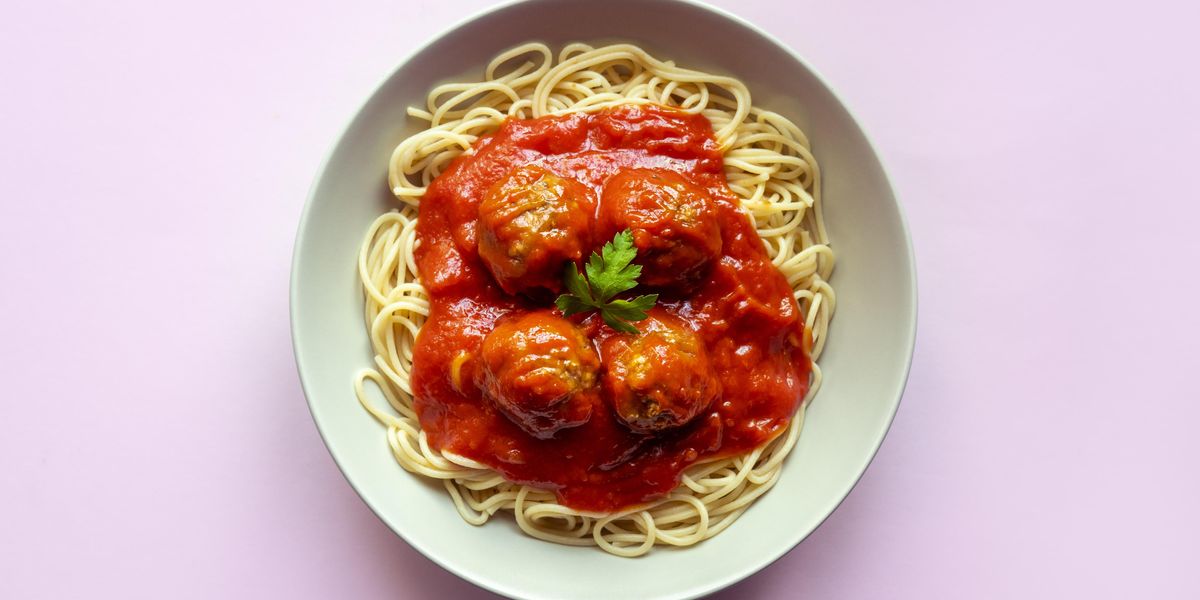 Logging on to the internet can feel like a wading into a minefield. Some days come and go with little fanfare and then others are completely derailed by someone who woke up and decided to choose violence.

Today's downward spiral comes courtesy of a video showcasing one woman's unorthodox approach to preparing spaghetti and meatballs that has the culinary (and basic human decency) side of Twitter up in arms. Presented as if it was some genius life-hack some soccer mom had come up with after one too many overcrowded potlucks or family dinners, the clip shows a Costco-sized tub of Prego tomato sauce being emptied out onto a white marble counter. The woman then proceeds to sprinkle some very dry looking meatballs, what appears to be half a canister of parmesan cheese and two steaming pots of cooked spaghetti atop the bed of room temperature sauce before the whole thing gets tossed together.

There's so much to unpack in two minute and 20 second clip, from the absurdly excessive amount of ingredients being wasted, to the fact that the woman is barefoot to the woman filming the whole debacle who appears to be having her mind blown every step of the way. Then there's the concerning question of how one is supposed to serve this mess of table pasta. Not to mention the fact that she claims this method ensures that you "don't have to worry about dishes or a mess" even though that is demonstrably false and she could have just as easily have mixed this whole thing in the two pots she cooked the spaghetti and had the exact same number of dishes she needed to clean.

Naturally, people reacted with shock, horror and disgust at the whole display. Many took issue right off the bat with the use of Prego instead of higher caliber sauce brand or homemade variety while other raised concerns over how hygienic the counter in question actually was, but everyone agreed that there was absolutely nothing "normal" or "ultimate" about this particular food prep hack.

I sure as hell didn’t survive a pandemic just to risk it all for Prego sauce on someone’s nasty ass counter https://t.co/AsapydpL1A
— Ryan Marino (@Ryan Marino)1620704713.0

But wait, it gets worse.

As if the Prego clip wasn't distressing enough, it turns out preparing obscene quantities of food as if you were working at a Cold Stone Creamery is far from an isolated phenomenon. Another Twitter user pointed to a similar video of a woman mixing together taco ingredients into a massive blob of nacho cheese sauce and then scooping the concoction into a tortilla cone.

You thought the spaghetti prego video was bad? Wait until you see the taco vid: https://t.co/jArTIS7gNN
— ZaxPrefersTV (@ZaxPrefersTV)1620711157.0

It's a similarly nauseating display of processed foods coming into direct contact with bare countertops, but the rabbit hole goes even deeper. It turns out this isn't the scoopable nachos lady's first offense. You might recall a similar clip that made the rounds last month that shows the same woman pouring excessive amounts of ice cream, soda, gummy worms, Sour Patch Kids and fruit punch into a toilet bowl before giving the whole thing a flush for good measure and serving it to her unwitting guests (all of whom presumably instantly got a mouth full of cavities just on contact). It's horrific.

Digging a bit deeper, these culinary war crimes appear to be the work of musician Taylor Watson. Tracing the videos back to her Facebook page seems to turn up even more weird food hacks that also include cooking eggs inside of donuts in a waffle iron and making an obscene amount of ramen in a bathtub. The facade starts to chip away once you realize that Watson's page is part of a larger Facebook prank network that seems to thrive off creating clickbait-style parody videos that are designed to go viral because of how unrealistic they are.

But where does that leave Prego lady then? Is she a Facebook prankster as well, wasting gross amounts of food for clicks? Maybe, but it's more likely a fetish thing. Perhaps, the vaguely porn-y commentary should have been a dead giveaway but (and I hate to be the one to break this to you) there is such a thing as a messy fetish.

Sparing you some of the more NSFW details, the messy fetish content has some crossover with mainstream media such as a person getting a pie thrown at their face or covered in slime for comedic effect and while nudity frequently gets flagged by major video hosting sites, other more benign content like absurd faux cooking tutorials manage to fly under the radar and can even crop up on your feed.

So, there you have it: it's a sex thing. Let's all pour one out for the poor social media manager over at Prego who undoubtedly had quite the day.