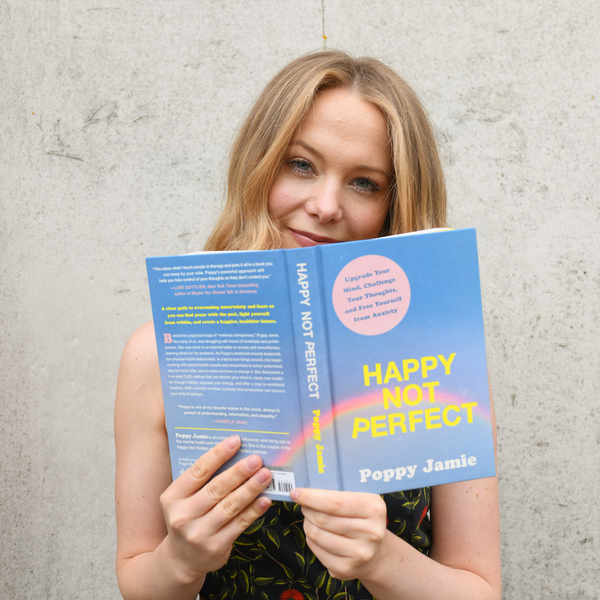 Last year, Poppy Jamie was back to the place so many of us have been countless times before.

Hunkered down in London during the middle of a pandemic, the 30-year-old entrepreneur began to lose herself. Working on what seemed like 50 projects at once, Jamie felt herself slipping back into a spiral – one she's tried hard for years to drag herself out of.

So naturally, her bestie Suki Waterhouse dragged her out to do a workout class and grab breakfast before our interview. "A best friend is the greatest gift in the world," Jamie says laughing. "They're the ones who snap us out of it."

The occurrence isn't rare for Jamie, who's been best friends with Waterhouse since the early days of her career after they met at a nightclub. They launched accessories brand Pop and Suki together in 2015, specializing in pastel jewelry and purses. The duo are known as Wife and Wife, something Mr. Third Wheel Robert Pattinson, Waterhouse's' partner, surely understands.

A support system, a really good one at that, has been at the crux of Jamie's mental health discovery since launching her platform. Founded in 2015, Happy Not Perfect is a full-service mental health digital world headed by Jamie and her team. The wellness endeavor covers nearly every tangible aspect of communication: social media, a talk show podcast, a phone app, the list goes on. She's also the global wellness advisor to Erno Laszlo.

It's a blooming mental health empire, no doubt. One that's been brewing in the back of her mind since she was 18.

"There's an element of comparison, especially in creative worlds," Jamie says. "It's affected me so much. Happiness is total self acceptance for who we are and what we're going through. We have to be empathetic and kind to ourselves."

Before diving into the mental health sphere, Jamie's life was all about being put together. The London School of Economics graduate moved to Los Angeles upon graduation, working at MTV, ITV, and later, Snapchat as the host of its first chat show, "Pillow Talk With Poppy."

Being in the public eye isn't an easy task by any stretch of the imagination. Nearly every waking hour was spent worrying about her own perception. Nothing was off-limits, from what skirt she was wearing to how badly she flubbed her lines during interviews.

Then there's that Jude Law Anna Karenina press incident, where the young budding reporter fell out of her chair pre-interview and burst out into a hysteric fit of giggles for several minutes afterward. It's an incident she tells with a smile, but I'm sure she'd rather forget. What was a hilarious viral video moment to the Internet was a reflection of deeply-rooted flaws on perfection to Jamie.

Ok.. so this is what happened during my interview with Jude Law... a kill me now moment http://t.co/kmAxhahP #stillembarrassed
— Poppy Jamie (@Poppy Jamie)1346938116.0

"I had this Aha moment where I realized if I was going to continue serving this perfectionist within me, I was going to remain deeply unhappy," she says somberly.

Her path to professionalism was spiraling out of control, chronic fatigue and burnout plaguing her mental and physical body. It was like waking up with a bad knot in your stomach, preparing to mount the anxiety for the day.

One night at 3 AM, Jamie shot up out of bed with the words "Happy Not Perfect" circling around her mind. She didn't know how they got there or what they meant, but it somehow made sense. For a girl who's life had been sunshine and rainbows on the exterior for years, the inescapable plague of reaching perfection weighed down on her like a 2-ton duvet blanket.

She didn't know what the words were going to turn into, but she knew the phrase was going to be the "antidote" to solve everything she'd been struggling with up until then. "I think even when I was little, I kind of developed these beliefs that, well, if I'm perfect, then, you know, I'll be liked," she says. "And I'll be enough and I'll be accepted."

Since going live, Happy Not Perfect has been a mental health platform, championing issues young people deal with everyday from workaholism, social anxiety, to body dysmorphia and outward appearances. Throughout the last six years, Jamie has sat down with celebrities and experts alike to discuss flexible thinking, a new approach to problem solving and mental wellness that's saved her life in more ways than one.

The mental health space has come a long way since those MySpace days where we all posted cringe-y statuses about depression. While it's still a slight taboo in some places of the world, including in Jamie's own England, the conversations around mental health have become more positive ones. Jamie says it's incredible to see the charge Gen Z is taking on TikTok, often openly discussing brutal truths about their own wellness struggles in hopes to de-stigmatize the issue.

"Honestly, every single day I wish I was Gen Z," Jamie says. "Such a shame I'm a millennial. They're just so much cooler."

Jamie's Happy Not Perfect memoir arrives today – a childhood dream for her. The 320-page book, adorned with a pastel rainbow reflective of Jamie's personality, is more than just an aesthetically-pleasing brick for your coffee table. Jamie hopes the book will usher in a new era of how we think about the most important people in our lives: ourselves.

"I always say to anyone that the greatest gift you can give yourself is to learn how your mind works, like self-awareness, and understand how you work on yourself," she says. "It's been the most incredible cultural elevation of us all accepting that not everything is perfect, but actually, that's okay."